Colonel Mustard and the Dijon 5 in George Square 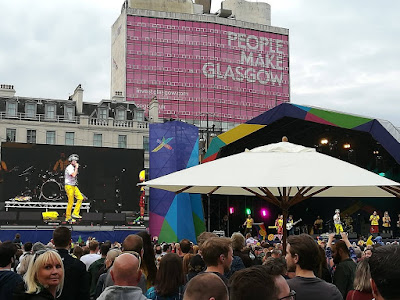 On Sunday night, performing under the shadow of the famous People Make Glasgow sign in George Square in the very heart of the city, Colonel Mustard and the Dijon 5 put on a party to emphasise just how true and how important that phrase/mantra is.

The band turned the city centre yellow and the famous square reverberated to the sounds of people chanting PEACE, LOVE AND MUSTARD, alongside a dance off and people crossing the road. People do indeed make Glasgow and the passion, energy, creative and co-operative spirit that Colonel Mustard and the Dijon 5 have displayed over the years has brought smiles, joy and friendship for many people. On Sunday night they deservedly brought their colourful and euphoric show to the city centre.

Glasgow has been showing off this week. The European Championships have come to town and they have given the city the opportunity and excuse to use its wonderful space, facilities and atmosphere to full effect. Glasgow wouldn't be Glasgow if it didn't extend a warm welcome to those visiting, whilst also giving the locals a chance to party as well.

George Square has become a festival village, with the BBC parking their studio directly across from The Counting House pub, overlooking a stage and a big screen broadcasting all kinds of sports from the Championships.

A wide range of acts, including Orbital, have been booked to perform on the stage and on Sunday at 7pm it was the turn of Colonel Mustard and the Dijon 5 (CMD5) to bring the yellow movement to the party.

And my oh my do CMD5 know how to get a party started! 2,500 people packed into the festival area and there were plenty of yellow CMD5 t-shirts and hoodies in the crowd. On the surface CMD5 may be a pure fun party band, but dig into their songs and you'll find that they are packed with social and political commentary.

David Blair from the band wasn't afraid to display his political leaning by jumping down from the stage as the band were setting up to tie a Palestine keffiyeh around the Israeli flag that was lined up alongside the other nations performing in the Championships. Security wisely decided to just remove all of the flags.

After an exciting swimming race finished on the big screen, Colonel Mustard and the Dijon 5 took to the stage and blasted out snippets of Limmy's techno kid mash of 1-2 buckle my shoe and ring-o-roses.

The Colonel then joined his band and got things moving. Before long the Square was bouncing to euphoric catchy pop in the shape of International Sex Hero before being led to Cross the Road - or George Square. The way the whole crowd joined in was testament to how good the band are, how accessible their music is and how quickly people fell under their spell and charm. 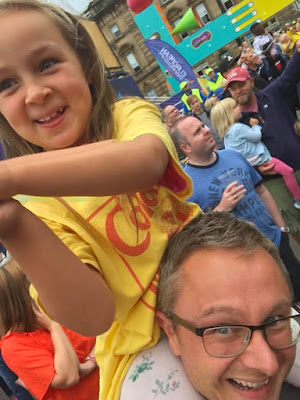 Zoe knocking it out the park during the dance off

Fresh from playing to 11,000 people at Belladrum and another summer of regular festivals, Colonel John McMustard and his sensational band hooked the crowd, reeled them in and then released them for more fun. They played superbly, encouraging their audience to sing, dance and get involved.

Ginger Girl was bonkers yet it tugged on the heart strings, the Dance Off was great fun with everyone copying the moves of driving in the car, knocking it out the park, disco-ing, jumping and fist pumping and These Are Not The Drugs You Are Looking For was an utter joy - a mix of the Beta Band crossed with Primal Scream being mixed by Andy Weatherall, the guest MC's took the song higher and the closing mantra felt so good, so right and so important.


Everyone's happy, everyone is smiling, no-one here is sad anymore

For a brief moment in time the above was true for everyone in George Square, it was mission accomplished. You looked around and everyone was happy and smiling, forgetting about all the craziness going on across the world at present.

The closing anthem of Peace, Love and Mustard was utterly euphoric, the verses talk of meditation, pacification, loneliness, hurting - then the chorus screams for peace, love and mustard.

On the train home my eldest daughter asked what it was all about, I asked if she was happy, she was, and I said it just all makes sense.

Do yourself a favour and go and see this band live. You will not be disappointed.

Colonel Mustard and the Dijon 5 play Glasgow Barrowland Ballroom on 22nd December. TICKETS HERE  Make it a yellow Christmas! Over 14's. Check Dance Off from their last Christmas show at the Barrowland a couple of years ago.

Great summary. It was a fun day and this Grandma is glad she made it to a CMD5 concert at last!