Cover version of the month #36
The Donna's cover Billy Idol 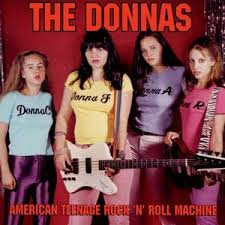 Woops! I missed my cover of the month in May. So I'll write 2 covers based blogs in June ... I hope!

I recently read the magnificent Meet Me In The Bathroom by Lizzy Goodman - based on the New York City music scene from 2001-2011. It is a magnificent read, jam packed full of snapshot interviews and recollections with everyone who was (and is) anyone connected to the scene.

I found myself browsing Spotify as I was listening and I checked The Donna's a band who get a brief mention in the book. I checked their song Dancing With Myself and it immediately felt familiar but I couldn't place it. I thought I must have heard it at the time.... but it was so perfect, why had I not bought it?

Well it turns out it sounded familiar because it is a cover of Billy Idol song, one he released 3-times, first as Generation X, then as Gen X, before finally scoring a hit with a remixed version when he launched as a solo artist.

The Donna's stay true to the original on their version which was released via the film Mean Girls. It's a cracking song, flowing superbly and full of hooks that implant themselves in your head on first listen.

Idol produced some brilliant pop punk songs and this is one of them - more pop than punk. It's fun, cool and just a great song. Check all the versions mentioned below.