Sometime earlier this year I vowed to write shorter snapshot blogs on albums I enjoy. This hasn't happened! I still set out to write feature length blogs and end up with half written blogs sitting in my drafts box for months on end - many stay there!

And this one has been unfinished for a couple of months - I originally intended to finish and publish it back in April. With Super 8 planning the follow up in the summer, I thought I'd better get this one out there!

Read on for a review and interview. 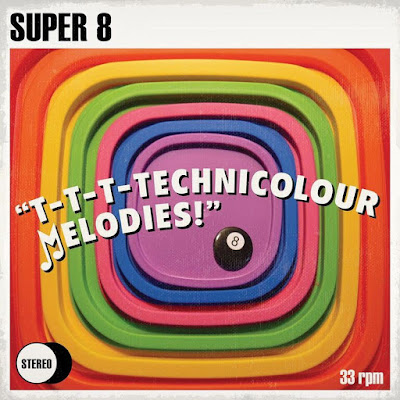 T-T-T-Technicolour Melodies by Super 8 is an album I stumbled across earlier this year. The modern art/psychedelic cover art was captivating in its own way, but delving into the album brought great reward. It's homemade, warm, melodic and lovely and all the work of one person - who goes under the guise of Trip.

The home recorded album is full of warmth, from the opening Tomorrow's Just Another Day through to closer My Sweet Baby Jane. There are all kinds of instruments, loads of melodies, unexpected breaks and a lot of love.

Opener Tomorrow's Just Another Day has one of the unexpected breaks mentioned above and also a stunning little add on at the end, just when you think the song is about to finish it takes a glorious turn.

Catsuit is a favourite of mine. It reminds me of The Lemonheads/Evan Dando in the way it is written and flows so naturally.

Even at only 2 minutes 23 seconds, there is still time for Trip to add on a little refrain, he has an uncanny knack for being able to find an extra little melody and hook.

Last Final Cigarette and To Morocco are two more brilliant examples of how naturally talented Trip is. Acoustic guitars, melodies, stories, thoughts and dreams pour out of him. 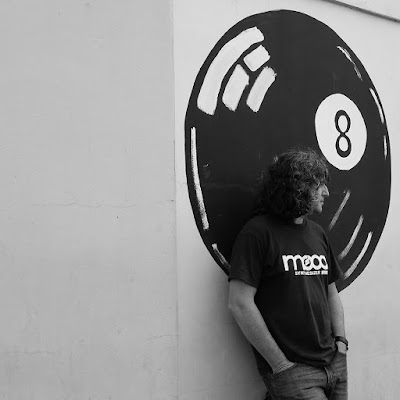 The title track has a bit of the Beta Band to it. Homemade groove based psychedelic pop. Then we have the simply gorgeous Just A Serenade. This is a gem. Trip's voice is raw and pure as he pours his heart out.

S.K.Y (Stop Killing Yourself) was a title that immediately grabbed my attention and a dreamy intro leads to a gorgeous song and I love the line pick yourself up off the ceiling.

You can stream and buy the album below from the Super 8 bandcamp page. Read on for an interview with Trip - the man behind Super 8.

2. What have you released to date? Just the one album … so far! I’m currently busy working on the next one.

3. How did you find the label you have released your latest album on? I didn’t - they found me as it turned out! They heard my cover of Serious Drugs and got in touch. When they heard my own original songs, they wanted to get involved.*

4. Do you have any plans for the album or touring? No real master plan as such. I guess I’d just like as many folk as possible to hear this music I make. Of course, I realise that touring helps to promote music but I recorded this entire album at home on my own. It would be pretty hard to try & recreate it in a ‘one-man-band’ style I’d imagine. That said, I’m not completely ruling the idea out, I’m just saying it would be difficult! I’d need to keep an eye out for one of those bass drums you strap to your back for starters plus I’d need some cymbals, a cello and a trumpet that I could somehow operate with my feet whilst simultaneously strumming guitar blowing on a harmonica. That should do it!

5. What influenced the album? Well, I’d been playing stripped-back acoustic versions of my songs at open mic nights through in Edinburgh but, whilst playing them acoustically, I was hearing them in a more ‘symphonic’ way inside my head & needed to find a way of recording these definitive versions. After a few botched attempts in so-called professional studios, I finally realised that the way to do these songs justice was to go into self-imposed exile, batten down the hatches & just record everything myself at home … using a battered old portastudio. After much blood, sweat and tears, the finished result you hear on “T-T-T-Technicolour Melodies!” is the closest I’ve been able to get to how this particular batch of songs plays inside my head.

6. How do you write? Does it vary from song to song?  I tend to start off with my old faithful acoustic guitar. It could be a chord progression or a riff then, off the back of that, I’ll hope that what I’m doing reveals some kind of vocal melody that I’ll jam over the top with. If it does I’ll press record then, on playback, try to find any seeds of an idea that I can begin to work up into a finished, realised song.