The Pastels at the Mackintosh Church

Last night I got to catch The Pastels playing under a full moon ..... indoors!

The show was part of a series set in the stunning Mackintosh Church at Queens Cross in Glasgow where there is currently giant inflatable moon, measuring 7-metres in diameter, suspended above where people go to worship. The moon, featuring 120dpi detailed NASA imagery of the lunar surface and it is the work of the artist Luke Jerram. It is pretty spectacular! 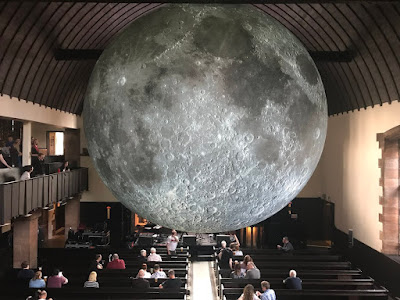 Synergy Concerts have booked a string of shows while the moon is on and they have really caught the attention of the Glasgow gig going public.

Last night featured 3 artists and I made sure I was in the venue for shortly after opening, firstly to have a look at the moon before it got too busy, secondly to ensure I caught the set of opening act Andrew Wasylyk.

I discovered Andrew after browsing albums that have been nominated for the Scottish Album of the Year Award. His Themes For Buildings And Spaces album is a widescreen, dreamy, cinematic wonder and I hope it advances to the longlist. I think it could win.

Andrew came on stage with 7 friends and announced he was going to play the full 9-song album - result! The subsequent performance made me appreciate the album even further. The way the band gelled, the way the bass grooved, the way the horns enhanced the beautiful melodies being played on piano and glockenspiel .... it was a brilliant performance. Kind of David Axelrod at times.

I would encourage you all to check the album out. Andrew's ability to create beautiful soundscapes is very special.

Modern Studies were the second act on an excellent triple bill. With 2 backing singers they set out to create an expansive noise. While they managed that, it was only the second half of their set that I really got into. They have recently released their second album Welcome Strangers via Fire Records.

On to The Pastels. As they were setting up I got talking to the girl (lady) in front of me. It was an interesting conversation as she told me how she chose to attend Glasgow University because of her love of The Pastels and how she used to go into John Smith's Bookshop on Byres Road because Stephen worked there! As she was a couple of years older than me, The Pastels debut Up For A Bit with The Pastels arrived at the perfect time for her.

She wasn't the only one to come to church to worship The Pastels. The audience ranged from teenagers to (I imagine) people in their 60's. Their influence has been felt across the world and they are still mentioned in wonder by young guitar bands breaking through like The Orielles and the band offer so much support to these acts. 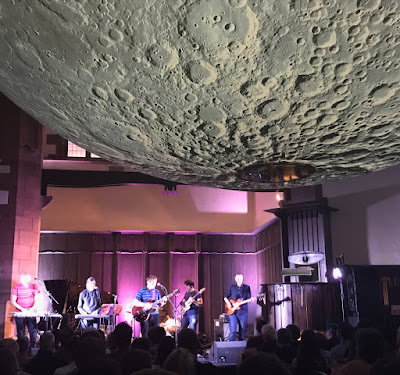 So much care goes into the creation of a Pastels song. They have impeccable taste and high standards. Songs from Slow Summits, their most recent album, made up most of the set The 6 piece line-up played superbly, the sound for all acts was impeccable, the natural acoustics of the church worked wonders.

It was an interesting experience to sit down and watch The Pastels. I found myself checking and appreciating the simplicity of some of the chord changes and how the band jammed and grooved on two/three chord riffs at times. The two members who alternated between keys/synths/flute and brass created wonderful melodies over the grooves.

Kicking Leaves was introduced as 'a West End song', Summer Rain is quintessential Pastels - both songs offer so much in terms of visualisation and feeling.

Night Time Made Us was possibly my favourite song of the night. Everything came together and the way the band jammed at the end was all kinds of dreamy gorgeousness.

Check My Heart was a summer pop delight, Katrina's beats and rolls throughout the set were faultless and again, sitting down to watch The Pastels allowed me time to appreciate all members skills even more.

Baby Honey caused two people to waltz down the aisle to dance at the front, the energy from the song is remarkable, the one chord riff/drone with lead guitar over the top creates a great groove.

It has been 5-years since the Slow Summits album and I hope The Pastels introduce us to some new music in the near future. And part of me wonders if the band would be tempted (like so many are these days) to play shows taking in classic albums/periods. I'm positive that would be extremely well received.

But that said - every period with The Pastels is classic. 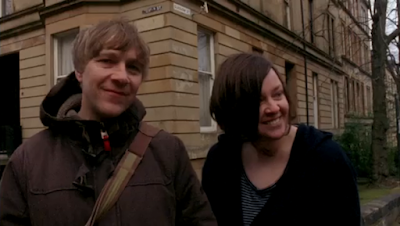