The Beatles In Scotland 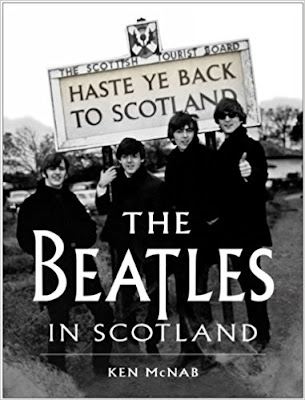 McNab digs into Lennon's childhood holidays in Durness and love of the Highlands, his Scottish relatives and his trip up north (and car crash) with Yoko and children that resulted in them spending a week in hospital. There is a chapter on the Scottish Beatle - Stuart Sutcliffe, fantastic memories from photographers like Harry Benson, fans, Scottish musicians that played and toured with them and plenty on the Mull of Kintyre and on McCartney's drug bust when he was caught growing cannabis with great quotes from his Scottish lawyers.

I would thoroughly recommend the book to fellow Scottish fans of The Beatles. For the purposes of this blog though, I'll share a few stories. A full list of dates The Beatles (and Silver Beetles) played in Scotland is listed at the end.

Tales of their little known 1960 tour when they were still The Silver Beetles supporting Johnny Gentle, a fellow Liverpudlian, are truly remarkable. Did Scotland experience the first signs of Beatlemania?

Arguably yes, although the boys didn't win the hearts of everyone. The 5 Silver Beetles in 1960 were Lennon (19), McCartney (17 and just weeks from school exams), Stuart Sutcliffe (19 and born in Edinburgh), Harrison (17) and Tommy Moore (36) the latest in a long line of ad-hoc drummers.

Their first ever Scottish set included One After 909 (later to appear on Let It Be) and covers of songs by Elvis, Buddy Holly, Chuck Berry and Little Richard.

Lennon reportedly got in a clinch with a local girl called Wilma and pissed off her boyfriend!

The Beatles were skint and Johnny Gentle had to phone the promoter to advance the boys more cash. It sounds like Gentle looked after them and spotted their potential and recognised their charm. The lads ended up having local girls stitching their shirts at one point. They slept in their van after their show in Nairn.

On the 1960 tour Sir Paul has said 'It was important in helping us get our relationships right with each other.'

Come January 1963 The Beatles were straight from a residency in the red light district of Hamburg to playing the delights of Elgin, Dingwall and the Bridge of Allan. It must have been a comedown! Although in Hamburg they played for up to 6-hours at a time, on this tour it was short 40-minute sets and by this point Ringo was on drums and Love Me Do had been released. Still, 200 was their biggest crowd when they played Aberdeen.

But come their June and October shows, Beatlemania was in force.

Legendary Scottish music journalist and broadcaster, the late Stewart Cruickshanks, was just 12 when he saw them at the ABC in Edinburgh in 1964. The Twist and Shout EP was the first record he ever bought.

Stewart told Ken; 'The pervading atmosphere was one of bedlam. The kids, and especially the girls, were there to let off steam. And they did. It was viscerally exciting because you knew you were part of a special moment, and you felt at the same time that you shouldn't be part of it.'

Stewart continued; 'When they came on stage, I had never heard so much noise in my life. I don't think I was too bothered, though, because it was just enough to see them. You had the records if you wanted to listen to the Beatles.'

I'll leave other stories and quotes to the book. It is a must for any fellow Scottish fans of The Beatles, a really fascinating insight into their development and what happened in Scotland; from 1960 all the way through to the Mull of Kintyre and beyond.


The Beatles, STV's Roundup interview with the Fab 4 from 1964