I Wish It Would Rain 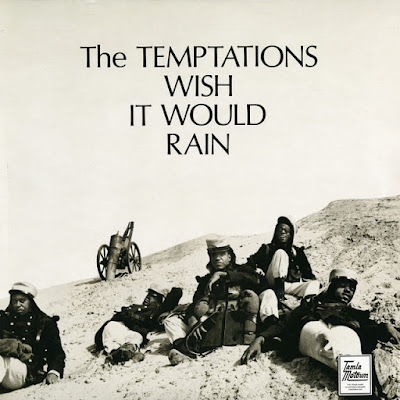 
I've been digging into the extensive catalogue of Tamla Motown with relish and joy recently. Without wanting to mention Spotify again, they really have made it easy and addictable to explore albums, b-sides, demos and rarities.

I became acquainted with Motown at an early age courtesy of some records my Mum owned; a Marvin Gaye and Tammi Terrell duets album with Sheila Easton in pencil on the back sleeve just in case anyone borrowed (and forgot) or picked up the wrong copy at a party back in the Sixties or Seventies.

So I'm going to start a monthly Motown blog on certain songs, singles, artists or times. And I'm going to begin with a song by The Temptations called I Wish It Would Rain.

A short piano and bass intro leads to the piano being dropped and singer David Ruffin singing with real heartbreaking soul that wishes the sunshine and blue skies would go away cause he has lost his love.


Sunshine, blue skies, please go away
My girl has found another, and gone away
With her went my future, my life is filled with gloom
So day after day, I stay locked up in my room
I know to you it might sound strange
But I wish it would rain

It is an incredible opening verse that sets the scene and the second verse takes it a step further and at one point Ruffin sounds lost for words after stating listen, I got to cry, the ooooh before he explains that crying eases the pain is sublimely soulful and tugs on the heart strings.


Cause so badly I wanna go outside (such a lovely day)
Everyone knows that a man ain't supposed to cry
Listen, i got to cry, 'cause crying
Eases the pain, oh yeah

It just gets better, yet there is even more pain and self therapy with Ruffin singing that he longs for rain so he can go outside and hide his tears in the rain. There is no holding back the pain in the song.

Lyricist Rodger Penzabene penned the song just after learning that his wife was cheating on him. He would commit suicide barely a week after the single's release.

Producer Norman Whitfield created much of the musical structure to accompany Penzabene's heartbreaking poetry, with Barret Strong composing the piano intro on a piano with only ten working keys! The music is perfect for the song, there is real melancholic heartbreak in this record, it is stunning.

I Wish It Would Rain reached number 4 on the Billboard Hot 100 for 3-weeks and later be covered by Percy Sledge, Gladys Knight and the Pips and also by Marvin Gaye on the b-side of Lets Get It On.

Many, many Motown songs are about guys/girls longing for a lost love but I Wish It Would Rain may well be the most heartbreaking of the lot. It is a gem.