Carla J Easton & Man of the Minch at the Glad Cafe 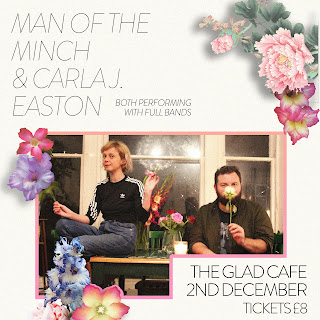 Had my sister really not played a Glasgow headline show since 2019? When did I last see her play with her band? And it turns out Pedro Cameron (AKA Man of the Minch) hadn't played with his band since 2019 either!

Doesn't time fly and hasn't the pandemic f**ked our concept of it right up?

Both artists released lockdown albums and then couldn't tour or play to promote them. Tough, especially tough when you've released quality albums like Weirdo (2020) and The Tide Is At The Turning (2021) on Olive Grove Records.

If Carla, Pedro and their bands had a couple of years of pent up frustration built up inside them, then it exploded out of them at the Glad Cafe last night. Passion, intense energy and probably oodles of relief to finally be celebrating the release of their albums with a party.

Both artists have already moved on, Carla has released another album with Poster Paints (a lockdown project) and has almost finished mixing her next solo album, while Pedro has recorded an EP in Gaelic and been writing for his next album.

But last night it was great that they took the time to FINALLY have launch parties for their album. 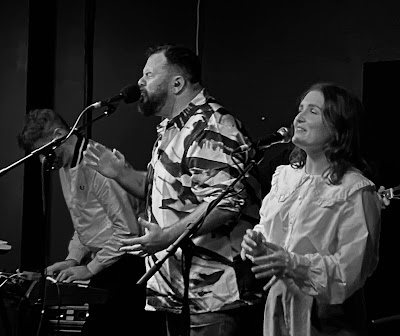 What a magnificent noise they created.

Mountains opens the album and on Friday night it opened the show in style, building from almost nothing to a cauldron of Celtic soul. Pedro Cameron and Emilie Boyd's voices intertwined beautifully.

Cameron highlighted the huge help he has received to create his vision for The Tide Is At The Turning, from Creative Scotland funding, all kinds of friends who played on the album and from the LGBTQ+ community. On Rosanna, Cameron's band hold back for a stripped back gem that cuts to the bone.

Rosanna, Rosanna I love your son

I'm holding his hand in front of everyone

And then on the stunning stomper that is Ordinary, Cameron and Emilie sing;

There's nothing special about me

Having seen Cameron play on his own with just an acoustic guitar and now with a 6-piece band backing him, I (and I'm sure I speak on behalf of everyone who was in The Glad Cafe) have to strongly disagree.

Pedro Cameron, you are very special indeed. What a voice and you sure know how to write a song and pull a band together!

If you want to check how special Man of the Minch is then you can stream/download/buy a phyical album via his Bandcamp page. And I'm pretty sure that Pedro and his band will take the roof off Saint Lukes when they play in February in what is bound to be a brilliant show with the Hen Hoose collective. 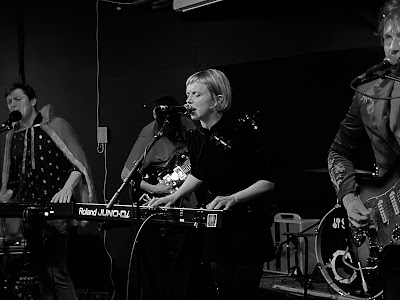 Carla and her band came flying out of the traps and barely let up. Opening with the pure pop of Get Lost, the powerful synth banger Over You and the rollercoaster rolling gem of title track Weirdo generated a huge response from the crowd. I turned to my friend Hugh at one point during Over You to raise an eyebrow - they were really going for it!

It's been a while,  but I can't recall Carla playing with such intensity. She hammered on her keyboard/synth and sang her heart out, while at times there was duel electric guitar action going on. Paul Kelly (mainly on bass) had an arsenal of effects pedals at his feet that he could probably have played a set with on his own.

Wanting What I Can't Have was a delight. New songs Sugar Honey Iced Tea (about Carla's fear of walking home in the dark), Tempt Me and One Week were full of hooks, but there was plenty of space within the songs to let them flourish. They bode very well for the new album.

Attack Of The Glam Soul Cheerleaders was a glam soul stomp complete with audience participation. Fun on stage and off. Girl From Before slowed things down ... a little. It was played with a passion and energy that transformed the song.

Thorns was brilliant, the refrain, repeated a number of times in succession led to a brilliant synthy instrumental that ended with Carla and Gus (keys/synth and resplendent in a Santa cape) using a theremin effect to generate fantastic weird psychedelic style sounds.

There was never sun in my blood,

This led straight into Bird In The Sky to close the show. Heavier and pacier than the version on Carla's Homemade Lemonade album from 2016 (originally released under the Ette alias, but rereleased in 2021 for the 5th anniversary as Carla J Easton), the melodic psychedelic synth pop song was delivered with relish.

I hope it's not too long before Carla and her band play again. 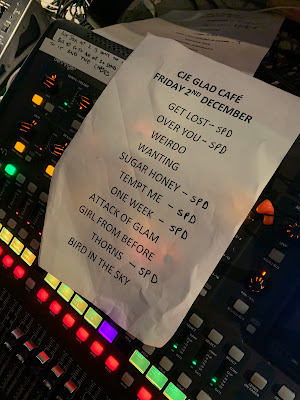