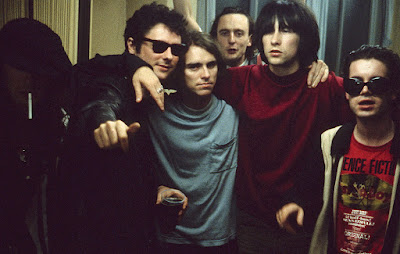 Following on from 10 favourites by The Vaselines, The Lemonheads and The Pastels, ahead of two sold out shows at the Barrowland Ballroom on 17th and 18th December, it is the turn of Primal Scream to receive some love and attention.

Primal Scream came bounding into my life with the Movin' On Up video and single. They looked super cool and sounded incredible. I bought Screamadelica off the back of it, expecting more high energy rock n roll. Instead my mind was blown by the ambition, talent and soundscapes spread across this exceptional double album.

I have followed the band ever since then, catching them numerous times at Glasgow Barrowland, in a tent at Glasgow Green, at festivals, traveling to Manchester to see them play Screamadelica for the 20th anniversary and I have followed them on their sonic journey through music.

Screamadelica, Give Out But Don't Give Up, Vanishing Point and XTRMNTR is an exceptional run of albums from 1991 to 2000.

Pre 1991 the Scream were still determining who they were, their two patchy albums, Sonic Flower Groove and their second eponymous album released in 1991, were splashed with highlights like Love You and I'm Losing More Than I'll Ever Have, but in general it seemed like the band couldn't decide if they wanted to be The Byrds or The Stooges. The band were best known for the b-side Velocity Girl, 90-seconds of pure jangle guitar pop magic. 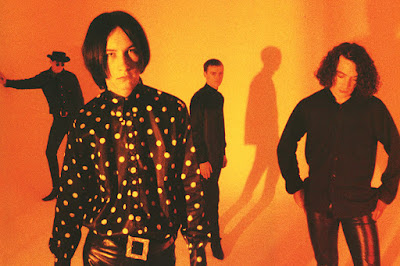 Meeting Andrew Weatherall and being introduced to ecstasy changed them - for the better. Although it took time to change everything, even when Primal Scream released Loaded as a single Gillespie had greasy hair and dressed in leathers, his performance on Top of the Pops for that single is ridiculous to watch. Check it HERE

With a sharp mod style haircut Bobby Gillespie was suddenly the coolest person on the planet fronting the coolest band on the planet. Looking good enough to match his never undeniable excellent taste in, knowledge of and thirst for music. 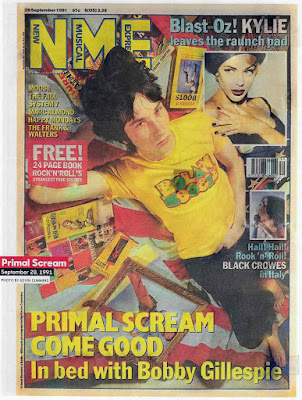 Boundaries were being broken down in music all over the world and the Scream suddenly saw all kinds of new possibilities opening to them with Andrew Innes, Gillespie's partner in crime, starting to play a key role. Andrew Weatherall took them to another dimension.

The controls were not just set for the heart of the sun, Primal Scream were going higher than the sun.

The band arguably went too high, burned too brightly and they had to come down. Kind of. Give Out But Don't Give Up (and the recent Original Memphis Recordings) show a completely different side to the band - rock n roll, funky jams and gorgeous ballads - that they had touched upon with the incredible damage.

They went further, 1997's Vanishing Point is exceptional. The band, buoyed by the addition of Mani from the Stone Roses joining on bass, produce a melting pot of sounds that is truly their own. It is notable that the album was largely self produced.


This radio station was named Kowalski

Primal Scream went even further with XTRMNTR in 2000 - bringing in all kinds of guests to create truly incredible and pulsating music - Kevin Shields, the Chemical Brothers and David Holmes were among those joining the party. I would love to the 20th anniversary of this album to be marked with some live dates where the album is played from start to finish.

Has there been an album as energetic and as angry released since? Is there a band out there with the talent, anger and background that the Scream had at this time? Will there ever be again?

Primal Scream also utilised b-sides, recording cover versions, jams and releasing som stunning remixes. Although only one has made it into my list below, favourite b-sides include How Does It Feel To Belong?, Hammond Connection, Screamadelica (from the Dixie Narco EP) and the Burning Wheel (Chemical Brothers remix).

The post 2000 albums did take a dip in quality for me, but the exceptional tunes kept coming; Autobahn 66, Country Girl, Sometimes I Feel So Lonely and 2013 being just four.

The last few years have seen Primal Scream become a little more reflective in old age - revisiting the Memphis Sessions (who could blame them after Andrew Innes' extraordinary discovery of the tapes!) and with the singles compilation and tour.

Gillespie has always known how important Primal Scream were, or were going to be. And he is a music fanatic, he knows how to play the game, how to talk his band up on the level they should be.

And this current singles tour, a greatest hits tour if you will; maximum rock n roll, punk rock energy, euphoric house music, bluesy soul ballads - all combined will only cement what a truly incredible band Primal Scream are. They should be cherished ... they are.

Somehow I have tried to select 10 favourites. I could easily have selected 20.

Autobahn 66
Mani's bass for the Stone Roses is fantastic, but I think he really makes his mark with the Scream. I love the rumbling bass, the beats and the beautiful instrumental melody before Gillespie comes in.

Autobahn 66 has a pulsating energy and delicate dreamy beauty to it. It's a real favourite of mine.

Everybody Needs Somebody (Original Memphis Recordings version)
There is a lyric in this song that got me the first time I heard back in 1994 and it still gets me every time. It's when Gillespie sings;

The BBC documentary on the Original Memphis Recordings is fantastic. I love how Bobby rhymes off all these incredible people working on the album, names he has got to know through record sleeves and I love how he talks so passionately and proudly about his band mates and how they stepped up their game to play at the standard required for this album, in the setting they had in Memphis and with the musicians, engineers and producer involved.

This is such a gorgeous song, Denise Johnson's backing vocals are heavenly and I love the way the song breaks down to rise gloriously. A stunner.


Shoot Speed/Kill Light
I mentioned Mani's bass above, on this sonic electro punk blast it is at the heart of the song, allowing guitars to blitz all around it. On record this sounds like the vinyl might not cope with it, live it is one of the many songs Primal Scream have in their arsenal to shake things up, to move to another level, to threaten to tear the roof off the place. White Noise, White Heat. Incredible.

Come Together (Farley mix)
I have blogged extensively on my love of this song, most recently HERE. My favourite version is from the 2011 Screamadelica shows where the Scream mix 3 versions together - you'll find that on the link above. Utterly euphoric pop, acid house, soul, gospel music.


I'm free, you're free
I want you to touch me
So come on touch me
It's all too much


Movin' On Up
This was the first Primal Scream record I bought after seeing the video on the chart show. Bobby Gillespie pulling all his Jagger moves, looking great, sounding great and with a big gospel choir singing my light shines on. This still sounds so fresh all these years down the line. Brilliant on record, utterly sensational live. 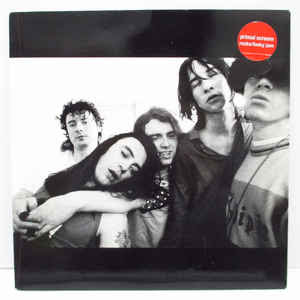 I remember this coming out as a single and being incredibly excited by it. The Scream Team looked completely wasted on the cover, you stuck on the record and it was up tempo Stones-y rock n roll. High energy, high fun, high times for the Scream Team as they shot into the top 10 for the first time. Deservedly so.

The lyrics for the verses flow out of Gillespie like Dylan fronting the Stones before Mick and Keith come in for the chorus.

Velocity Girl
Released as b-side to Crystal Crescent back in 1986, this 90-second guitar pop gem was lumped in with C86. It stood out a mile and was allegedly the inspiration for the Stone Roses moving away from the sound of their Garage Flower era songs towards the likes of Made of Stone. This is clever, pure pop. I blogged on Velocity Girl back in April - HERE


New video from 2019 for Velocity Girl

Higher Than The Sun
A Dub Symphony In Two Parts
In my opinion this is Primal Scream's best song. Lyrically, musically and with the production, they just get it absolutely spot on. This is psychedelic bliss; Gillespie sings;


I'm beautiful I wasn't born to follow
I live just for today I don't care 'bout tomorrow
What i got in my head you can't buy, steal or borrow
I believe in life and let live
I believe you get what you give

The music is trippy and beautiful, really taking the listener on a journey. Looking back and listening to Primal Scream's eponymous album in 1989, there is nothing to suggest what would come. You'll get more of an idea from reading old Bobby Gillespie interviews.

Higher Than The Sun features on both sides of Screamadelica, the original version on side 1 is sublime, the Dub Symphony In Two Parts on the flip is outrageously good, it really does head higher than the sun - stunning!


Primal Scream - Higher Than The Sun


All 3 sections edited together

Swastika Eyes (live)
Good on record, so good they included 2 mixes on the XTRMNTR album, but live this song becomes an absolute monster. Provocative, punk, electro, high energy, techno... anyone on before or after Primal Scream at a festival was obliterated by this song with Mani in sensational form on bass. The imagery and energy that leap from this song is sensational.

Damaged
This gem of a ballad comes after the euphoria of Come Together and Loaded on the Screamadelica album, easing you back to earth after sky scraping highs. This may well be my favourite Gillespie vocal and the groove that the band get locked into is simply heavenly - they are on it.

If I had to choose in order, Damaged would probably be my second favourite Scream song behind Come Together. The love lyrics are beautiful, the guitar solo is inspired, and Gillespie's confessions of happiness, security and love sound like the microphone has been inserted directly into his heart.


Sweet summer days when I was feeling so fine
Just you and me girl, was a beautiful time
Oh yeah, said I felt so happy