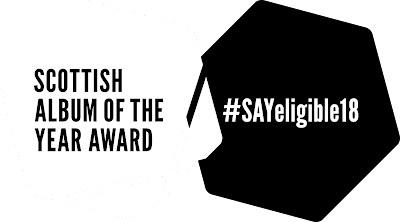 The Scottish Album of the Year (SAY) Award launched this week as labels, bands, bloggers, journalists, fans, record shops and venues were encouraged to nominate Scottish albums released between 1st April 2017 and 31st March 2018. Full criteria for nominees can be found HERE

The list of nominees is building steadily and submissions are open until 31st May. The (always) lengthy list is then whittled down to a longlist of 20 and then that subsequently becomes  shortlist of 10, one of which comes from a public vote.

I love the SAY Award which really shines a light on the diversity and quality of music our small country regularly produces. I love browsing the nominees and trying to predict who might make the longlist, who will go on to the shortlist and who is in with a shout of winning.

Nominations have only just opened and there are some big hitters - Franz Ferdinand are the largest band on there buoyed by a new line-up including blog fave Miaoux Miaoux; Mogwai's remarkably consistent output of albums ensures they are in the running (have they been in the nominees every year?); then we have Roddy Woomble, previous winners Young Fathers,  Karine Polwart is another artist that is prolific and on the rise, as is Blue Rose Code and we have veterans Hue and Cry.

Conflats by Out Lines, the collaboration between Kathryn Joseph and James Graham from Twilight Sad won many friends upon release, although I have to be honest and say that I just couldn't get into it. I do expect it to fair well though.

It's good to see Ryan Joseph Burns (formerly of blog faves Seventeenth Century) on with his album Absence that I really need to check out. The SAY Award is a good reminder - I still need to check out Any Joy by Pronto Mama and Body Prt Fly Invisible Hero - great title and I'm listening to the opening track as I type.

I recently blogged about the Broken Records album and really hope that progresses to the longlist.
And then I've been digging in and have been enjoying The Great Albatross album Asleep in the Kaatskills which has a great feel to it and brilliant playing. It's kind of country, rock n roll and euphoric indie in the vein of Arcade Fire at times.

Themes for Buildings and Spaces by Andrew Wasylyk is really beautiful and I'd mark that as an early contender for the shortlist and a potential winner. It's very different and it stands out. The vivid song titles like Under High Blue Skies and Come the Autumn are matched by cinematic, dreamy, melancholic instrumentals. I really enjoyed listening to it and will definitely revisit.


Solan Goose by Erland Cooper is an album I checked out after hearing a track on Radio Scotland. A real headphone album, it is another beautifully dreamy album that you can get lost in. Definitely in with a shout of progressing to the next stage and beyond.


Kiss and Tell by Babe is another album I've enjoyed on first listen. A Jimmy Somerville-esque falsetto soars over electronic bleeps, beats and grooves. While No Lusicous Life by Golden Teacher is far out super cool grooves and electronica. It sounds extremely different from anything else I've checked out so far and stands out.

Starin' At The Freaks by December 91 is a title that grabbed me. They sound like they are in their own little world which is something I always like in a band.

Friends with good taste have encouraged me to keep listening to Post Era by Lylo as the rewards grow with every one.

Speaking of titles, my sister emailed me to say she had nominated an album she discovered via Bandcamp called You Could Not Have Given The Slightest Of F**ks by Jonny Shitbag and the Smokes! It had been released on a tiny Paris based cassette label. It is brilliantly raw punk pop.

I blogged about Siobhan Wilson's album There Are No Saints and it is a real gem, her voice is stunning. I really expect it to progress.

Many indie artists have had a very productive year or so; Spinning Coin with Permo and Martha Ffion with Sunday Best to name but two.


And Last Night From Glasgow has a strong chance of matching (and hopefully beating) last years progression to the longlist with a range of brilliant albums that highlight the superbly eclectic range of music being released - the homemade psychedelic pop from Stephen Solo; the stunning voice, playing, songwriting and feel from Sister John; a mix of electronica, grooves and swagger from Medicine Men, electronic goodness from Sun Rose and young Annie Booth delivering an album that highlights her talent at present and potential for the future on a joint release with Scottish Fiction.


The list of nominations is still growing and I have loads of albums to check out. I hope you enjoy discovering the brilliant music that Scotland produced from April 2017 to the end of March 2018.

Keep up to date with the nominees and listen to them via www.sayaward.com