What would have happened if LNFG hadn't arrived? How many of these releases would have been pressed on to vinyl, or even released at all? Last night in Glasgow (pun alert) wouldn't have happened - and it was amazing!

So much about the label makes sense. So let's just revisit that before I go on to review the second birthday bash.

There are still a few membership places for our 2018/19 year. Why not take a chance? We will be releasing albums by Zoe Bestel, Radiophonic Tuckshop, Gracious Losers, BiS and one more TBC, plus you'll get access to all these launch shows.

Talk about great value for money. 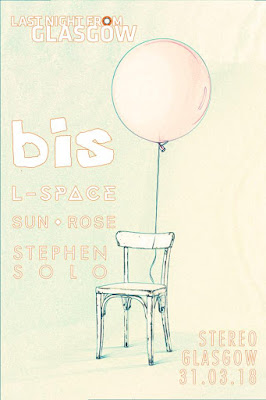 Stereo was the setting for the 2nd birthday party. It's a glorious hub of leftfield musical, artistic and vegan activity down a cobbled lane just round from Central Station with a fine selection of drinks. Well worth checking if you have never been,

Birthday parties should be celebrations and this was no different. I guess there was an added sense of occasion for those that had been involved from the off - the founding members - and also for those that became label members from the off - investing into nothing more than an idea. We swapped stories and favourite memories from the last two-years. And for relatively new label members, they got to experience something special, something magical - a sense of community.

I guess that is probably the most amazing thing of all, the community that Last Night From Glasgow has created, friendships, trust, a platform of creativity.... last night was special.

Stephen Solo opened proceedings, bursting into a sun drenched blitz of psychedelic pop with LocoCoco. Solo has an incredible talent for melody and for taking the listener on a journey, his songs are packed with glorious breaks, middle-eights, hooks and choruses.

Behind Your Eyes from his debut album contains the most beautiful Albarn-esque chorus, Think Strange from his latest album is brilliant inventive pop music and you have to remember that this guy recorded both his albums on his iPhone. For me, Stephen Solo is a genius.

Just saw Stephen Solo at the @LNFGlasgow show; it was weird and beautiful and fucking marvellous 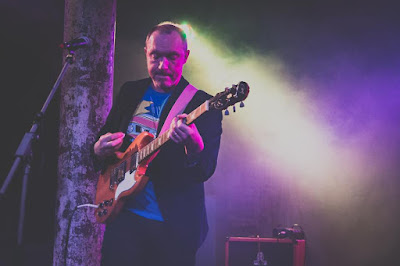 
Sun Rose were on next. This was only their second ever gig. The band (Albert, Gus and Callum) created their glorious The Essential Luxury album in the studio and online, never really intending to play it live. When they did create a live band, it was a 6-piece, with 4 of the members living Manchester. It was special (blog here). So how would they fair as a 2-piece? They smashed it - Gus and Albert mixed things up live on stage with synths, samples and Albert on guitar. Their voices combined beautifully and as the smoke billowed behind them, they created a real clubby feel with Dry In The Water soaring and flowing superbly. Stereo was rammed and before a glorious climax with Counting Upwards Albert had to ask the crowd to take a couple of steps forwards.

Can't stop thinking about how good Sun Rose were last night. 'The Essential Luxury' might be my favourite album from last year. Closer #5 - Counting Upwards (Sun Rose) THAT SYNTH CRESCENDO! 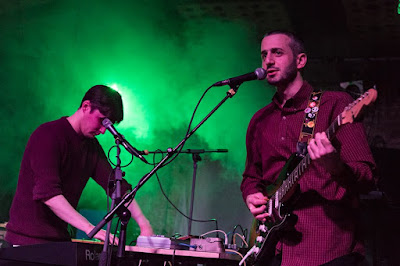 
L-Space followed, playing a trippy dreamy set to the biggest crowd of their (so far) short career. They look and sound superb, playfully weaving melodies from synths, keys and guitar together, all underpinned by a groovy bass. Blue Flowers is already a contender for one of my songs of 2018. I previously described it as Mazzy Star meets Portishead and i stand by it. I can't wait to own it on vinyl. Lead singer Lily looks super cool and her imaginative lyrics are set to widescreen sounds with Gordon Johnstone on guitar looking like he was having the time of his life.

@Lspace_band were glorious at @LNFGlasgow last night. A band still sheathed in shyness in the purest and most positive way. 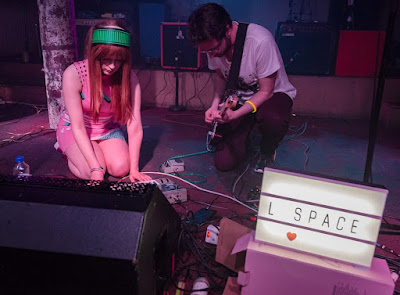 
On to headliners BiS. The band shot to fame in 1996, being the first unsigned band to appear on Top of the Pops with their glorious and furious Kandy Pop. The band have aged well in terms of appearance (not that they are old!) and on the strength of last nights performance and the poptastic new song that they dropped, they haven't lost any of their energy or sense of fun. They tore through a hit packed set (this song got to number 37) with urgency and the enjoyment on stage was matched by the packed crowd. Eurodisco was a real highlight for me and I know how much it means to label leader Ian Smith to have this band on the label. 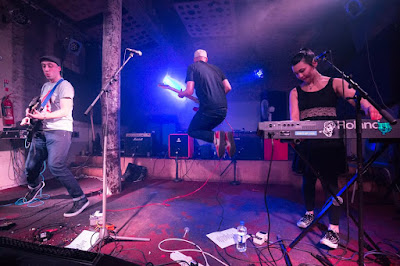