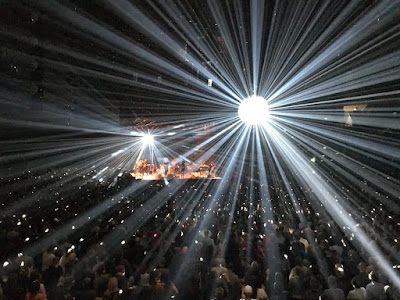 The band were playing 'in the round'. Using a boxing ring as a stage - who needs a massive stage? They immediately made the cavernous Hydro fell more intimate and they had a few more tricks up their sleeves than that!

The lights dropped and Arcade Fire made their way through the crowd like boxers, entering triumphantly and setting off into Everything Now, the lead single from their latest album. They immediately hit their groove and led the song in the first of many, many sing-a-long moments.

The 9-piece (at times more) band were literally bouncing off each other in the ring/on the stage. Win Butler was on little mini stages/boxes like he was up on the ropes after winning a boxing game and he drenched himself in water for effect.

The power and impact of Arcade Fire was delivered with full force and relish by a band delighted to be back in Glasgow, a city that they acknowledged had given them so much support over the years.

Does any other band of this size have as much fun? Arcade Fire have been inviting special guests on stage throughout their tour and as they were in Glasgow it was one of the city's favourite sons, Jim Kerr from Simple Minds, who strolled into the boxing ring (by this point the ropes had been removed to make it even more intimate) and performed a glorious Don't You Forget About Me.

The crowd didn't need any encouragement, but this just moved things up yet another gear! How do you follow that? Well with Keep The Car Running, one of my personal favourites from the band. I just love the flow and the groove and the hooks and developments.

The whole 2-hour+ set was a delight, but Sprawl II into Reflektor was sensational. The light show (see above) was incredible and Arcade Fire turned the Hydro into a massive disco. The band were truly brilliant, surging and soaring. At one stage smoke billowed from the front of the ring and it appeared as if the band were actually on fire - they were! 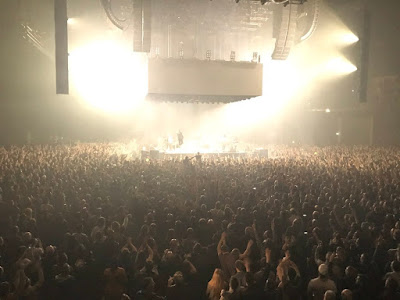 Neighbourhood #3 (Power Out) blazed a trail, a beautiful fragile We Don't Deserve Love showed a different side to the band and then Arcade Fire delivered a sucker punch (had to get a boxing pun in) with Wake Up complete with their support band on stage. Band and audience united in a way that the Hydro is unlikely to have witnessed before as arms were in the air and everyone was singing with all their hearts.

The band exited as they had left, through the crowd with the brass band playing Bowie's Rebel Rebel.

Come back to Glasgow soon! 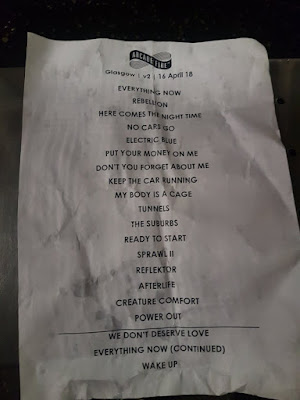