Vigo Thieves at the Art School

November is a crazy month for gigs in Glasgow and also for nights out.  Sadly I couldn't make Vigo Thieves at the Art School on Saturday night. Thankfully my friend Gordon (a previous guest blogger) was there and more than happy to write another guest review for me. 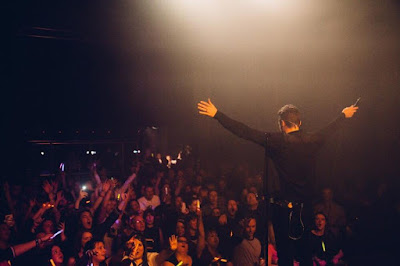 November has always been my favourite month for gigs mainly because plenty of bands tour at this time as they are looking to promote new albums for the Christmas market. It often brings problems because there aren`t enough days in the month and there will be inevitable clashes between bands that I want to see and this year proved no different.

We had already bought tickets for a Samm Henshaw show on Nov 8th and Prides / Fatherson on Saturday night just gone. These plans were booted into the air as soon as Vigo Thieves announced they would be touring in November. Both of our previous gigs clashed with Vigo gigs, one at Sneaky Pete`s in Edinburgh and the other at The Art School in Glasgow so we gave the Samm Henshaw tickets to a relative and booked an overnight stay in the capital to see the lads play through there.

At that gig I managed to wangle access all areas passes for the Glasgow gig as I wanted to put a new camera to the test and we then had to change other plans about. We had intended going to the ABC first to catch Fatherson and then heading up the hill to The Art School but in the end we just decided to sell our tickets at the door in Sauchiehall St. We ended up making two young ladies very happy as the Prides gig was sold out and we sold them the tickets at face value instead of them being ripped off by the usual touts that hang outside most venues in Glasgow.

We met up with my cousin and his wife for a beer in the bar downstairs before heading up into the venue to catch the support acts. It took a while for the crowd to come in and many of them will have missed the debut gig of BAD MANNEQUINS. Ross Hamilton , Craig Douglas ( Sonny Marvello ) and Jamie McGrory certainly made those who caught them sit up and pay attention, for a first gig together they absolutely creamed it and sounded superb.

I missed NIEVES as I was backstage talking to a few people but my cousin spoke highly of them . They have a headline gig at King Tuts coming up on Friday 18th December that we`ll be getting tickets for .

The floor was starting to fill up by now and I made a snap decision to go and put my camera away backstage. I`ve never been one for standing still at gigs and I had a feeling it was going to get rowdy as the boys hadn`t played live in Glasgow for a while. The lights dimmed and The Killers All These Things That I`ve Done was cranked up with the crowd stamping their feet and roaring out the I`ve got soul refrain as the Vigos` took to the stage . With everyone pushing to the front, Stevie Jukes took the mic and thanked the crowd for coming out . 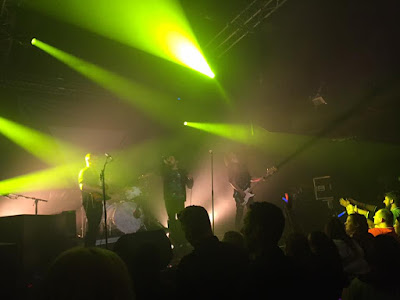 It`s been a while , Glasgow , let`s get fucking loud.

They blasted straight in with BELIEVE and the crowd joined in with such force that Stevie was forced to signal that he wanted his mic turned up. Coupled with Gino Phipps bouncing around like Zebedee on speed, it was obviously going to be one of those nights. Mixing old favourites like STEAL YOUR HEART and GHOSTS with new material THE ONE, new single FREE and the absolutely spectacular KING the band were on fire with Stevie encouraging everyone to sing along as Chris Gorman played the piano solo intro to HEARTBEATS.

You know the words, let`s hear it  he shouted and the whole venue sang them back to him .

As they clambered towards a noisy finish with THIS LOVE, Stevie decided to dive head first into the crowd and got bumped around on top of people for 30 seconds before they manage to direct him back towards the stage.

They finished with the soaring sound of the full version of HEARTBEATS and the mosh pit that had developed in front of the stage was soon joined by the lead singer diving in again. He had warned that he`d enjoyed the first one so he was going to do it again and he was true to his word. As the gig drew to an end it had been an hour of unadulterated joy and noise that saw everyone smiling and covered in sweat , just the way these things are supposed to be.

Vigo Thieves have been quieter this year in comparison to the last few but there is an album on the way and the new stuff they are producing seems to be much more polished. The live shows continue to grow and they continue to catch the eye and ears of music goers up and down the length of the country. As they say themselves

ONE DAY , ONE DAY I`LL BE KING

Sooner rather than later would be just fine . 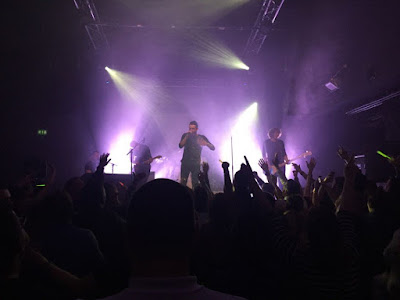