Ultimate Painting were brought to my attention earlier on this year when Bobby Gillespie from Primal Scream posted about their Green Lanes album and how he thought they were cool. I always love Bobby's posts on Facebook, his knowledge and passion really comes across, as does his fantastic taste.

Then a lovely girl Holly Calder who DJ's in Glasgow, puts on shows and generally has fantastic style and taste posted that she was putting Ultimate Painting on at the Old Hairdressers in town - a superb little venue.

I checked them out, bought the album and also bought tickets. Due to exceptional demand, the show was upgraded to Mono and what a show it was. I have had a rather manic week or so since then - hence the very late blog! 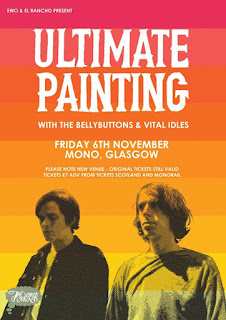 I caught most of Vital Idles set, a raw 4-piece enjoying making a noise, their guitarist spent most of his time facing his amp and buzzing off what his band were creating on stage. The young female singer occasionally bounded about the stage to help generate a response from the crowd.

The Bellybuttons were excellent, I thoroughly enjoyed their set, the guitars sounded glorious, they looked like they were having fun and their sound was reminiscent of the Fanclub at times, Pavement at others. I definitely hope to catch this band again in the future.

Ultimate Painting expand to a 4-piece when they play live and the resulting sound and performance was a joy to watch and listen to. The two guitars gelled superbly at times and played off against each other at others. 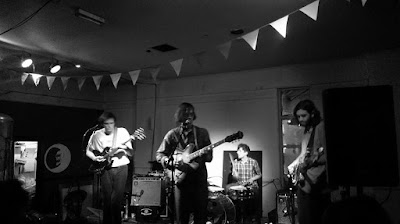 Jack Cooper and James Hoare shared vocals and their Velvet-y sound gained a warm response from the crowd - the coolest looking crowd at a gig I have seen in ages!

Songs like Break the Chain highlight the sense of melody and tenderness the band are capable of, while Out In The Cold is one of the most gorgeous songs I have heard in 2015.

Kodiak was dreamy guitar brilliance over a simple beat. Check it out below. I hope to see them back in Glasgow soon and I'll get a blog up a lot quicker next time!