'The roses are blooming' said Noel Gallagher on Soccer AM a couple of weeks ago.

Indeed they are. The band have sold out 3-nights at Manchester City's Etihad stadium and a 4th will surely sell-out between now and June.

There was panic online from 9.30am onwards this morning as ticket websites crashed or left you waiting anxiously in a queue for up to 20-minutes to see if you got through to the sale section.

A 3rd night was added after around 45-minutes and then, quite incredibly - a 4th! 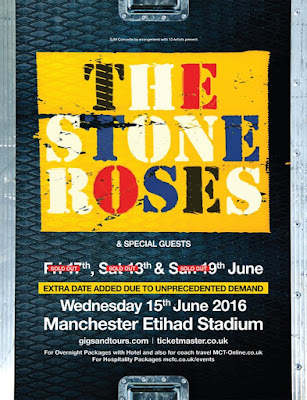 The shows and the tickets created heated questions and debate;

1. Why were tickets on exchange websites like Seatwave for £1,000+ within minutes of the tickets going on sale, promoting one Roses fan to ask How Do They Sleep? 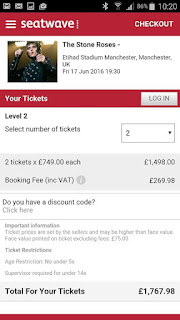 2. When will regulations into these kind of businesses and sites be put in place?

Quite frankly they take the absolute piss. Something should be done. Thankfully most real music fans will exchange at cost price, but the touts live on - and now they have websites!

3. How do they get their hands on so many tickets?

They seem to have them from the moment they go on sale - again, something needs to be done.

4. Have the Roses defeated the touts?

Adding a 3rd and then a 4th night will surely mean that many touts will be left selling their tickets at face value or potentially even less on the day - this happened on the Sunday at Heaton Park.

Since the Seatwave picture in section 1 of this blog was taken, prices for standing tickets have dropped on their website to between £250 and £350 and they have over a hundred available - so they are likely to come down again.

Everyone who wanted a ticket should really have got one. I'm certainly sure there will be plenty of tickets kicking around between fans at face value between now and June.

Tim Burgess has been enthusiastic with his tweets from the moment lemons started appearing around Manchester, I would bet on The Charlatans playing a few dates and also The Courteeners. Beyond that it would be guesswork - although John Squire was up in Glasgow at the start of October to watch Blossoms at King Tut's - so also a good bet.

I don't know, but The Roses haven't played live since 2013 so I would suspect that they will fall back to their tried and tested technique of playing some small European shows in late May to get warmed up for Manchester.

And surely The Roses will add at least one Irish date.

Whether or not they have the desire to tour remains to be seen, but I am pretty confident that there will be more dates.

7. Will there be new music?

The million dollar question. I hope so, but only if it is fitting of the name, not just for the sake of it. The Roses playing live again gives people something to look forward to, a bit of hope and joy. Amazing new music would be the cherry on the icing on the cake. 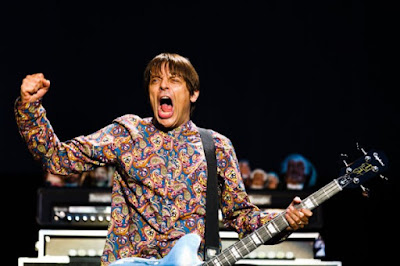