It dawned on me in the lead up to last nights gig just how fond I have become of Belle and Sebastian over the years and also how much material they have to choose from when playing live. The quantity and quality of material caused a bit of debate in my office with my colleague Tricia who is also a fan as discussed what they may or may not play, what we hoped for...and the more we talked the more I realised that I was really looking forward to the show.
I first caught the band back in 1997 (I think) when they played the QMU in their native West End of Glasgow. There was a real buzz about them in Glasgow, stories of them playing in churches and developing a real following. The QMU gig was rammed and I still remember loving the support band called V-Twin that featured a skinny young Irishman called Bob Kildea on guitar and their singer took great delight in playing with a Theremin on stage. Belle and Sebastian were lovingly shambolic, taking breaks so they could go out for a cigarette or fresh air during the set, just at total ease playing to what must have been their biggest crowd to date. Their warmth and humour shone through, as did the quality of their songs. They already released the ‘Tigermilk’ and ‘If You’re Feeling Sinister’ albums, I’d been lucky enough to catch them on their now famous radio session with Mark Radcliffe on Radio 1 and had been hooked by their literate songs with seemingly effortless melodies. 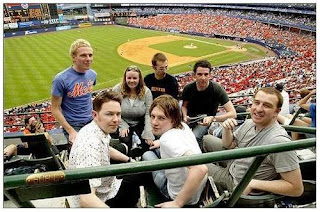 6 albums and 13-years down the line later, it is pleasing to say that Belle and Sebastian haven’t changed too much. They are probably a tighter band yet still somehow come across as being a little shambolic, in a loving way. Of course there has been the odd change in personnel, notably Isobel leaving and Bob of v-Twin has now joined the band. Yet the sense of warmth and love from the first time I saw them and from their initial recordings is still clearly evident.
So on to the show.
The band arrived onstage promptly for 9pm due the show being broadcast online and Stevie and Sarah sang a sweet Christmas song, although Stevie was laughing more than he was singing! They then launched into  ‘I Didn’t See It Coming’, the opening track from their latest album. It has swiftly become one of my favourites with Sarah’s gentle vocals leading the way until Stuart comes in to take the song higher until the glorious refrain ‘make me dance I want to surrender.’ Keen to keep the pace up they launched straight into ‘I’m A Cuckoo’ with Stuart defying his cold to dance his heart out, shimmying across the stage. Before moving on Stuart asked the audience (very twee-ly) ‘do you mind if I take my ski jumper off?’
From memory ‘Step Into My Office Baby’ was next up, with Stevie Jackson taking lead vocals, ably assisted by pretty much everyone with the complex and beautiful harmonies and melodies.
The gig passed by in a blur, with many highlights, including; 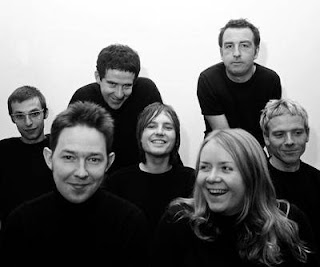 By in large there was just a real sense of joy and friendship in the Barrowlands last night, there was a fantastic atmosphere and a shared love of the music of Belle and Sebastian. Well done to them for playing 3 nights at the Barrowlands rather than a night at the SECC. The 7-piece band, backed by strings, were impeccably tight, they looked as if they were just getting going towards the end and could have easily played for another hour or two.
No ‘Legal Man’ or ‘Dirty Dream Number 2’ tonight (they had been played across the previous 2 nights) but with such a back catalogue and the highlights mentioned above I can’t complain at all. If this is my last gig of 2010 then it was a belter.
Posted by everythingflows at 03:53