So it is Sunday afternoon, two days after a blinding gig by Underworld at the world famous Glasgow Barrowlands. As I was a little delicate yesterday, my memory of the actual setlist or order of songs is a little hazy, but here goes.
I met one of my very best mates, Reddy, in McChuills in High Street, a real music pub and the bar staff were playing Bowie and Motown to kick start the weekend. We’ve had many a good night in McChuills pre/post Barrowlands or a night out. As it was we only stayed for a couple of pints so we could head round to the Barrowlands to see the support act Silver Columns.
It was pretty quiet when we got in just after 8pm and Silver Columns had just started. They were stuck behind a decorated table/desk so I’m not sure if they were actually playing any instruments, but they were singing and camping it up big style.
‘Cavalier’ burst into life, all twitchy and glitch synths with a call and response vocal. Unfortunately Silver Columns didn’t seem to have access to the full Barrowlands sound system, a real shame for them and for the crowd which was filling up fast.
‘Columns’ was beautiful, gentle vocals, all melodic and wistful. People were starting to dance, particularly the two skinheads in front of me who were far from discreet when licking their wraps of speed!
‘Brow Beaten’ brought things to a close, Donna Summer-esque disco via Fife, with echoes of the Beta Band. It was a short and sweet set; one that I am sure generated some new fans that will be checking out their album.
I’d made the mistake of keeping my parka on for Silver Columns and headed down to the cloakroom to stick it in ahead of Underworld. I should have stuck it in at the start of the night. The queue was massive and it took me a full 25-minutes to get it in.
I got back up the stairs just in time for the start of Underworld. The Barras was far from sold out, a far cry from the last time I saw Underworld in the same venue in 2002 when they took the roof off the place with Born Slippy getting a rapturous reception. At least there was space to dance, and dance we did!
Underworld’s latest album has been getting fantastic reviews and it was clear from the start that they would be mixing plenty of new songs with some of their classics. Karl Hyde was a lithe livewire from the offset with the euphoric ‘Heaven, heaven, can you feel it, can you feel it?’ hook from ‘Always Loved A Film’ generating a surge down to the front. 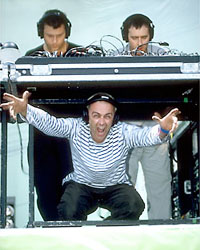 The duo of Karl Hyde and Rick Smith have now been recording music together for 30-years, although it was only (arguably) after the addition of Darren Emerson to the band and the release of dubnobasswithmyheadman in 1994 that they began to get success. An outstanding album, it was included in many end of year polls, despite the onset of Britpop.
Darren Emerson has now left the band, however their creativity shows no signs of diminishing and with trance guru Paul Van Dyke helping with the production on the latest album, they appear to be gathering new fans rather than losing them. It was certainly a mixed crowd, teens to people in their forties and probably even their fifties.
‘Scribble’ is another new track and the melodic synths caused many down the front to sing along with the riff.
Older fans needn’t worry, Underworld were determined to take the crowd on a trip through their back catalogue. If Brian Wilson and Phil Spector are masters of taking someone on a trip with a 3-minute pop song, then Underworld are masters at the 9-minute epic, with many songs segueing from one to the other.

‘Two Months Off’ brought a harder edge as the and delved back in time, Hyde was bounding about the stage, dancing behind a screen, generally vibing off the crowd and getting them up for it in return. Synths came bursting into life alongside the squelchy beats and kept pushing on as the dancing down the front got fiercer.
The lights works incredibly well with the music throughout the show, there was some old skool acid house smoke machines going on, at times the lights went off completely so all you could see was the lights of Underworlds bank of equipment and the silhouette of Hyde moving in time to the beats. His stream of consciousness lyrics making him dance musics version of Bob Dylan – or maybe not!
Time seemed to fly by and before I knew it, it was the moment that I was waiting for as the beautiful bubbles of synths came through the speakers signalling the start of one of electronic musics all-time classic; ‘Rez’.
The crowd knew it, the band knew it, it was party time and time to dance. The speed of the synths built up, the high-hats were kicking in, the beats came out of nowhere and we were off on a musical journey. Hands were in the air, people were jumping, everyone was dancing and grinning like loonies, drug induced or natural. 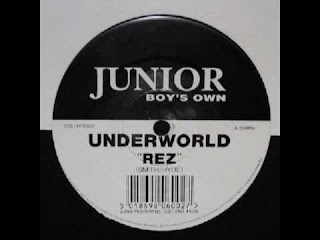 Just when you thought it was coming to an end, Underworld pulled their old trick of segueing into another one of their classics; ‘Cowgirl’. The crowd were singing along with the refrains ‘an eraser of love’ and ‘I’m invisible’ before the synths took over, lifting the song and the crowd even higher.
The reception afterwards was rapturous. As if to highlight how much they believe in their new material, Hyde strapped on a guitar and they launched into the New Order-esque ‘Diamond Jigsaw’.
‘Moaner’ saw things go really old skool with masses of dry smoke punped into the crowd and lights flashing on and off all over the place. The crowd were going mad for it.
With mass dancing going on to one of the heavier songs in the Underworld cannon, we were suddenly brought to a standstill with our arms in the air and more smiles as wide as the Clyde on our faces with the opening synths of ‘Born Slippy (Nuxx)’. Hyde’s lyrics kicked in ‘...she smiled at you boy’, the synths kept coming, Hyde started again, things were about to kick off big style. 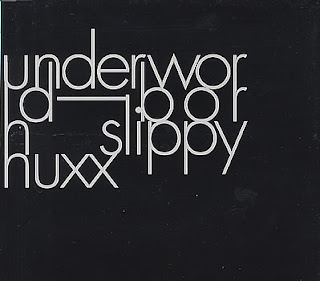