Logging on to the Popcop website I discovered that Admiral Fallow have signed a worldwide publishing deal with Netwerk One Music who will re-release the bands excellent 'Boots Met My Face' album in 2011 and give it the plugging, press and exposure it richly deserves.

Regular readers of my blog (should I have such a thing) will know that a few posts ago I had mentioned my surprise that no-one had picked up on their top class album to distribute it on a wider scale. I've now got my wish and I'm sure the band have got theirs!

Well done to the band, well deserved and it will be interesting to see what 2011 now has in store for them. 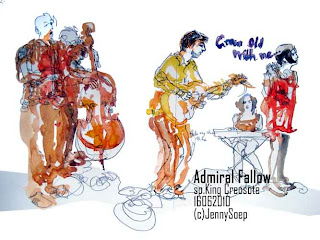 (Drawing by the excellent Jenny Soep)
This news was hot on the heels that the Popcop exclusively broke the news that Frightened Rabbit have signed a major label deal with Atlantic Records, following the release of three albums on Fat Cat. This hard working band have really kicked on in terms of their songwriting and ability since they started, building a fanbase through solid gigging and regular releases.
They have achieved a lot on a small label, not necessarily in terms of sales, but in terms of exposure and building that fanbase that has resulted in a major picking them up.
Frightened Rabbit play two nights at the Barrowlands in December with support from Admiral Fallow. I get the feeling that there will be a real sense of celebration in the air that night! 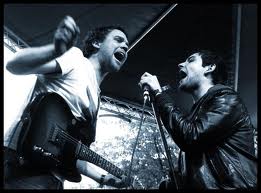 Moving away from bands, there was the news that Radio 1 is having a bit of a revamp and this has resulted in the appointment of Ally McCrae for their Introducing in Scotland show, which will move to a Sunday night. 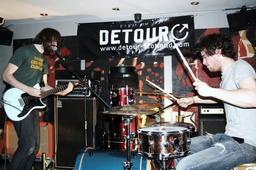 McCrae takes over from Vic Galloway and while it is sad to see Vic go (he will still be with BBC Radio Scotland), I'm sure I am not the only music fan in Scotland to be excited by this appointment. As with Admiral Fallow, I mention Ally on a previous blog due to his Detour exploits. So to have someone who is out in the frontline getting his hands dirty by putting on nights and events, regularly attending gigs ad supporting independent and unsigned music in Scotland can only be beneficial in the long run.

I look forward to hearing his first shows in January 2011 to see what he has in store for the show.

So there you have it, a quick blog with 3 reasons to be cheerful for Scottish music.
Posted by everythingflows at 03:00