Shock horror – two blogs in a week. And it will be three after Underworld tonight.
This one is pretty short and sweet.
Last night I went to the Apple Store in Buchanan Street to catch the Vigo Thieves playing a free gig. The band who have recorded some imaginative promo videos throughout 2010 got the gig as they said they recorded their video for ‘Steal Your Heart’ on an i-phone 4 and edited it on a Mac. You can watch the video HERE
I’ve been following the Vigo Thieves since the start of the year when my friend Helen suggested a trip to Wishaw to see them at the Soul Suite in the Commercial Hotel. I hadn’t been there since around 1997 when I went to my mates 21st and was surprised to see it cleaned up and excited to feel a real buzz about the place in anticipation of the Vigo Thieves first ever ‘Shook To The Bones’ club night on their home turf. The band were (admittedly) a little worse for wear by the time they took to the stage, but the aforementioned ‘Steal Your Heart’ stood out with it’s biting guitar riff and refrains. And as someone who was a teenage Bon Jovi fan, I still like to hear the odd ‘baby’ in a song. 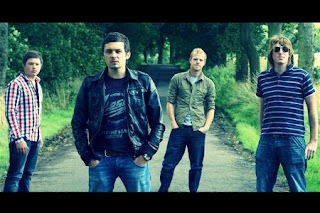 Since then they have released a couple of singles; ‘Steal Your Heart’ and ‘Blood Red’, played loads of gigs, been hard at work writing and recording, they’ve been played on Soccer AM and they’ve also played at Ibrox and received the endorsement of a certain Mr McCoist. So it is fair to say that they have had a pretty productive 2010.
On to the Apple Store. Due to their drummer being out of action for the time being after an operation on his arm, the band were armed with a huge Mac screen for a backing track. They opened with new song ‘Echoes’ before a few technical issues with the Mac caused a short delay and I heard someone mumble ‘should have got a Dell’. Undeterred the band launched into another new song, the rather epic ‘Sound of Summer’ which warmed up the ever growing crowd on a cold winters night. The piercing, circular guitar riff led into rumbling bass and the opening lyrics ‘it was the sound of the summer, playing on the radio, you could feel the heat, the drums were beating...’
The song goes up a gear into the chorus; ‘Come on baby, don’t break my heart, i’m all dressed up, and out of luck, the drums are beating, my sweat is cold, remember that summer, it was raining gold’.
It was a short set last night, but that only served the band well, highlighting that they set out to write songs about love and hope, with sing-a-long choruses and infectious guitar lines.
Previous single ‘Steal Your Heart’ took things up a notch, more swirling guitar riffs with a nod to the likes of Simple Minds and U2 and uplifting lyrics ‘stay young in your heart, stay young in your mind’.
The band may have played another song or two, but after a few post gig beers my memory fails me, I do know they ended with ‘Blood Red’ and its hooks were being sung by me and my mates as we headed off into the night.
I look forward to seeing the band in 2011 when their drummer returns.
Posted by everythingflows at 03:57