Skies Fell at The Arches

Last night Lynn and I went to The Arches to witness the debut show by Glasgow band Skies Fell. I left thoroughly impressed by the scope of the bands ambition to put on such a fantastic night, equally impressed with their songs and how tight they are as a band.

We arrived at The Arches around half seven. Now for anyone who hasn't been to The Arches, it is a huge venue  slap band in the centre of Glasgow. The show was advertised as being at The Arches, but was it in the cafe/bar, or in one of the arches that make up the legendary club venue? I should also mention that the show was free to anyone who emailed Skies Fell for a guest list place.

Upon entering we found some equipment set up in the upstairs section of the cafe/bar, got a drink and caught up with Futuristic Retro Champions and Pareto, both of whom were playing special acoustic sets on the night.

At 8.45 Kunal from Pareto strapped on his acoustic guitar for a solo set, taking in some tracks from the EP they released earlier this year including 'Call Me Alphabet' and 'Nothing Major, Something Sergeant'. Kunal has a knack for finding a refrain and if I was compare Pareto to any and it would be Idlewild. Kunal took the opportunity to play some old songs and a cover of 'Colourblind' by Counting Crows that went down well.

There was a quick changeover and Futuristic Retro Champions came on to play an acoustic set; not something they have done very often. With a set that was even more stripped back than their acoustic set at Bar Brel in the summer, FRC's totally reworked some of their songs and they really showed off the harmonies and melodies.

'Speak To Me' was a real highlight with the excellent middle eight 'you and me are lo-fi, hanging out in our torn up levis, stick a record on the hi-fi, and point the speakers right up to the sky'. A slowed down 'Strawberries & Vodka Shots' and 'Jenna' also went down well.

However the night was all about Skies Fell. After FRC's an announcer took the stage to say that in 20 minutes time we all had to line up against the wall and we would be led to the venue for the night.

So we grabbed a drink and did just that. We were then led through the downstairs cafe/bar and into the depths of The Arches. We got to a door that opened and dry ice came tumbling out. I think the room is normally a rehearsal room, but not tonight! Skies Fell had kitted it out with a stage, sound system and a light show that wouldn't have looked out of place at Hampden for U2. 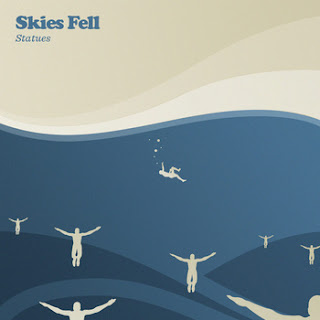 There was a growing sense of anticipation as the dry ice started to clear and the guitarist and keyboard player took to the stage to gradually build a melody out of nothing. After a while the bassist and drummer joined them before David left his keyboard and strapped on his guitar and the band burst into life.

The opening song was epic and must have lasted a good 7-minutes plus. The two guitarists took the song to new places several times during the song, leaving the audience to wonder if it was still the same song, or if it was a continuous song cycle a-la 'Abbey Road.'

With the band all dressed in white t-shirts and jeans, the light show working in tandem with beats and riffs and songs that sounded huge, everything really came together for the band. I was pleased for them as they had clearly out in the hours in practice but also with organising and marketing such a gig.

Skies Fell were in the mood to show off and they were probably a little relieved to get on stage after all the days planning and dreaming. Their songs sound huge and they has obviously chosen the venue to show the scale of their ambition and sound. Biffy and Muse were bands that sprung to mind during their set, not only because of the light show, but because their riffs just sound like the were created for stadiums.

Their second last song was particularly brilliant and they signed off with no encore. I went into their dressing room with Sita from FRC's afterwards (who goes out with David) and said 'what on earth are you going to do  for your next show?' He just grinned and slapped my back and said 'wait and see.'

If this show is anything to go by, it is well worth keeping an eye out for any announcements.
Posted by everythingflows at 04:49