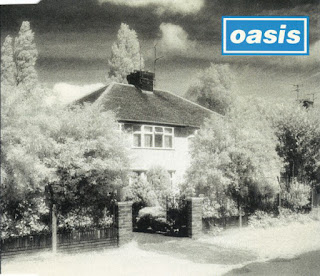 On 8th August 1994, 25-years ago today, Oasis released the majestic Live Forever. This remains one of my favourite Oasis songs, it flows, it soars, it brings a tear to my eyes, it makes me wanna hug my loved ones and punch the sky.

Oasis took flight with Live Forever. There was no talk of BMW's, yellow sumbarine's, Mr. Ben or Mr. Soft like there had been on the first two singles. The song flowed naturally rather than being built around riffs, Noel's romanticism comes out, his daydreams that had previously been more prominent on b-sides were now front and centre, Live Forever was the sound of a guy wanting to fly now believing that he could. The sound of someone finding a soulmate.

Noel was quick to point out that it wasn't effortless, talking of how he sat for days working out the guitar solo. However the rest of the song does sound like it just poured out of him. 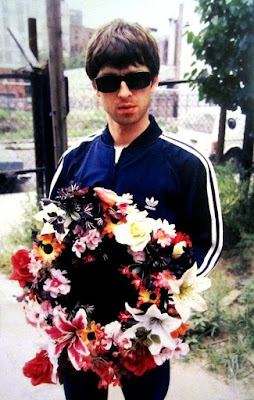 Noel on the set of the promo shoot

Live Forever dovetails frustration and reality with dreams and shooting for the stars, Gallagher just wants to fly, but balances that with being soaked to the bone in the morning rain. He recognises that he might not achieve everything he wants, but with typical northern attitude now is not the time to cry, it's the time to find out why.

And oh how his brother Liam sings it for him. It's one of his best vocal performances, like the song was written for him. All of a sudden Oasis were being viewed in a different light. Early reviews talked of Happy Mondays and The Pistols, with Live Forever it was The Beatles that were being mentioned, the song was (and is) that good.

Since the release of Shaker Maker I'd caught the band play in a tent at T in the Park and it blew my mind. I was witnessing something incredibly special. The band were totally on it, someone threw a ball onstage and the Gallagher brothers played keepie uppie and volleyed the ball into the crowd, asking for it back and doing the same.

Things were about to go stratospheric ... supersonic. I was in for the rollercoaster ride, as an 18-year old in 1994 Oasis were the perfect band for me, I believed I could live forever.

Read on for the lyrics, original video, 1993 demo and Glastonbury, Top of the Pops and Royal Albert Hall performances. The latter was broadcast live on the Evening Session and I love the change to maybe you're the same as me, you take two sugars in your tea :-)

Maybe I don't really wanna know
How your garden grows
Cause I just wanna fly
Lately, did you ever feel the pain
In the morning rain
As it soaks you to the bone