Paul McCartney at the Hydro

Beatlemania is a alive and well if last night in Glasgow is anything go to. Scotland's largest indoor arena was packed by fans of all ages and fans from across the globe, eager to witness 76-year old Paul McCartney romp through 3-hours of hits with the odd surprise thrown in for good measure. 39-songs!

McCartney was in sparkling form from the off. The huge Glasgow ovation that greeted him seemed to inspire him and his fabulous band. McCartney had a gleam in his eyes and a wide smile on his face as he launched into the timeless pop of A Hard Days Night, a Lennon number. Well they are all Lennon and McCartney songs, they are our songs.

Sir Paul and his band skirted effortlessly through his back catalogue; we had lesser known numbers like Junior's Farm from his Wings days sandwiched between the opener of A Hard Days Night and Can't Buy Me Love. We had new numbers like Fuh You and I was surprised that was the melody I woke up with in my head this morning. 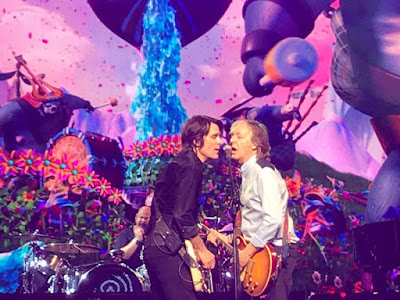 And I mentioned surprises. We had Lennon's Being For The Benefit Of Mr Kite over any of his own Pepper gems other than the title track, Macca stepping on to a platform in front of the stage and being raised to the roof to play Blackbird and Here Today in memory of John.

And we did have the odd (for me) forgettable moment. My Valentine, dedicated to wife Nancy in the crowd and then in the encore McCartney's seasonal offering Wonderful Christmas Time. Only memorable for the children's choir and the fake snow confetti falling from the ceiling.

But make no mistake, this was a wonderful 3-hours. I'll move on to my personal highlights.

Firstly there was the fact that my brother had managed to get us tickets 4 rows from the front, centre stage. We were in with some of Macca's staunchest fans from his fanclub, people from Canada, from Japan, people in Sgt Pepper costumes, people in retro t-shirts, people in new merchandise and people just completely in love with the man and his music.

Then there was Paul himself. He looks fantastic. He had a super cool navy jacket on to start off and I made a silent pact with myself to try and look that sharp if I make it to 76!

And McCartney was clearly enjoying himself, switching between bass and guitar, running to behind his piano, fingers dancing effortlessly over keys or frets. His guitar playing was top drawer.

His long serving band were magical. Drummer Abe Laboriel Jr beat his kit as if his life depended on it, he was incredible to watch. Guitarists Rusty Anderson and Brian Ray flanked McCartney and the three of them gelled with ease, while Paul 'Wix' Wickens was superb on keysand accordion. All helped with backing vocals.

Before I get to my personal song highlights (many!) I have to mention McCartney's personality. I've mentioned the twinkle in his eye, his smiles, but he was full of stories of watching Hendrix (there was a nice nod to him with an instrumental take on Foxy Lady) , there was the story of the Quarrymen recording for a fiver then all taking it in turns to have the demo acetate of In Spite Of All The Danger for 1-week, only for the drummer to then keep it for 20-years and sell it back to McCartney for a much, much higher price. And lovely memories of The Beatles and Linda. 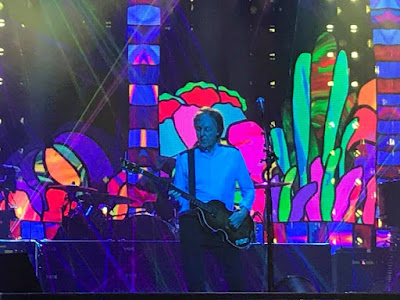 McCartney was warm, charming, cheesey and someone who just loves to show off. In that sense he hasn't changed a bit since the early days of The Beatles. The others quickly tired of Beatlemania, it was McCartney who kept them together and drove projects like Pepper, Magical Mystery Tour, Let It Be and Abbey Road. It was McCartney who hit the road playing Universities in the 70's and just kept on going. He loves to play, needs to play and will always write and sing.

His energy and enthusiasm is infectious. As is his vast cannon of pop and the Glasgow crowd lapped it up.

My highlights;  an unexpected blast through Got To Get You Into My Life, a powerful blast of Let Me Roll It, the beautiful guitar riff and raw natural I've Got A Feeling, the section where the band all moved to the front of the stage to play the aforementioned Quarrymen song, the pop perfection of From Me To You, the modern Macca delight of Dance Tonight, the stunning Eleanor Rigby and newly Fuh You was fun.

Something was sensational. Stripped back on a ukulele at the start before the band came in. The section you're asking me how my love grows, I don't know, I don't know was performed perfectly on stage and off, the crowd were in love.

Macca was off on a sensational run of songs. Band On The Run was joyous, so playful, so melodic, so classically McCartney. The backing films shown on the screen were superb, Macca assembling his gang for the cover shoot, elsewhere we had Paul looking super cool on his farm in Campbeltown with little Mary wrapped in his jacket, rare Beatles footage and lots of psychedelic art.

Live And Let Die was epic. Indoor fireworks and fire blasted from the front of the stage and 4 rows back my brother and I could feel the heat! And then we had the sing song of the night, a sing song to end all sing songs, we had Hey Jude. It was magical, every single person in the arena was singing and McCartney took time to conduct the crowd.

Phew, it was far from over! McCartney and his band came back on waving flags.

Birthday, Sgt Peppers and Helter Skelter were powerful blasts of rock. Helter Skelter in particular was a real highlight, the on screen graphics really took the crowd on a trip.

And we ended perfectly with Golden Slumbers, Carry That Weight and The End.

What a show. This was my third time seeing Sir Paul. I sincerely hope there is a 4th. 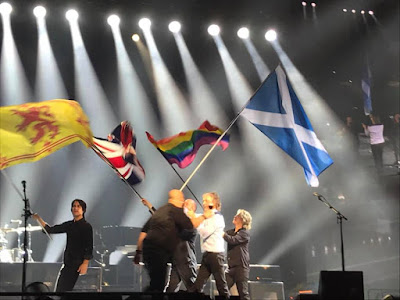