War Is Never Over (Even If You Want It)

Happy Xmas (War Is Over), a protest song against the Vietnam war, was released by John Lennon and Yoko Ono back in 1971. Ever the optimist,  Lennon was capable of getting the world to sing along to his songs of peace and love - All You Need Is Love was broadcast live to the world, Give Peace A Chance was recorded in a hotel bedroom in Amsterdam on his honeymoon with Yoko.

Happy Xmas (War Is Over) got the world singing. Backed by a fantastic advertising campaign with Lennon and Ono taking billboards out in major cities and adverts in major newspapers, the message was still one of flower power talk - believe, we can make a change, lets be positive. 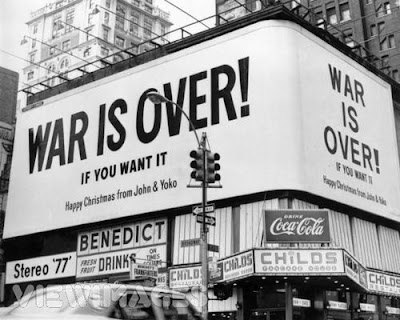 Fast forward to early December 2015 and the House of Commons votes to go to war; the government somehow find billions to invest in bombing Syria when food banks are on the rise and the NHS is on its knees. Despite an increase in public opinion leaning strongly towards no war, no bombs, the government seem hellbent on it and there is outrage as Labour MP's side with the Tories.

The decision to launch a bombing campaign left millions of people across the country feeling dejected. Waking up the morning after the vote, Stephen Farrell recorded his anger and frustration by writing a song - playing on Lennon's from all those years ago and adding a modern twist; War Is Never Over (Even If You Want It). 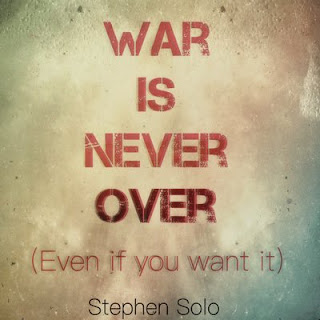 Released under the guise of Stephen Solo, the song begins a #notinmyname refrain that was used across Social Media in the days leading up to the vote and also in the aftermath. The references are clever, heartfelt and always with anger even through the gorgeous harmonies.

Stephen has recorded an album on his iPhone that will be released in 2016, this song was written and recorded on his iPhone and the video was also shot on his iPhone. Just goes to show how technology can allow artists to capture and release something as soon as they feel it, within minutes of writing it - to the world.

War Is Never Over has Lennon-esque echoes in the melody, vocals, (self) harmonies and the warm acoustic guitar sound.

War Is Never Over (Even If You Want It) is out now on iTunes. You can watch the video below.