Peter Hook and The Light at Glasgow Art School 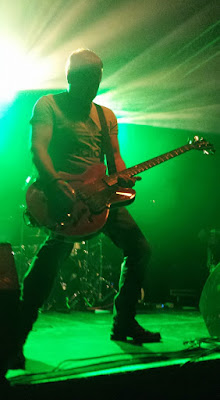 If Peter Hook wasn't on stage at Glasgow School of Art playing 3-hours of Joy Division and New Order songs last night, then his performance gave the impression that he would have been happy at home playing the songs on his stereo, singing a-long and looking through memorabilia from an incredible career.

Hooky is a fan - probably the biggest fan there is of two legendary bands that he has been part of.

As much as I would love to see Hooky and New Order kiss and make up, there doesn't seem like much chance - and f**k them - Hooky is having a blast.

At 7.45pm sharp he strode on to the stage and said 'Evening' before playing a set of Joy Division songs. The power of the songs was incredible, Hooky took deep breaths to ready himself for delivering Curtis' lyrics. Walked In Line was delivered with sheer power. Transmission was a delight. 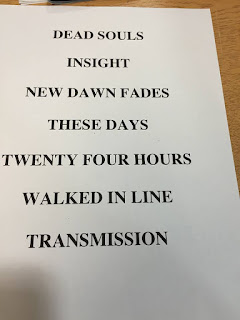 There was a short break and the band returned to play the New Order albums Low-Life and Brotherhood. Hooky displayed incredible stamina and passion, he was on stage for almost 3-hours last night and it wasn't a one-off! His band are constantly touring around the world - and what a band - extremely tight and Pottsy (formerly of Monaco) helping on vocals was particularly brilliant. 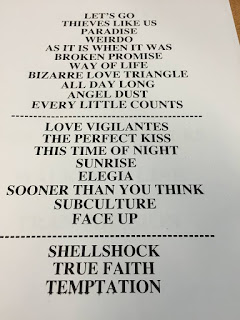 Look at that for a setlist - and that is on top of the opening Joy Division set! It was joyful and Hooky was having the time of his life conducting the crowd and the band.

Thieves Like Us was superb, Bizarre Love Triangle greeted like a long lost friend, All Day Long and Every Little Counts were brilliant. Sooner Than You Think was sublime, Love Vigilantes and The Perfect Kiss were blissful, Elegia beautifully somber. Then the encore of Shellshock, True Faith and the glorious Temptation resulted in mass pogo-ing down the front.

What a performance, what a night! Hooky threw poses and sang his heart out, the band were amazing, the crowd even better. 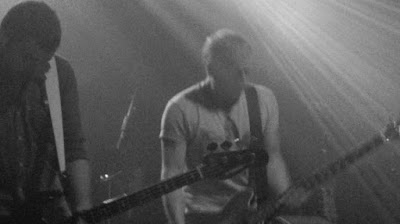