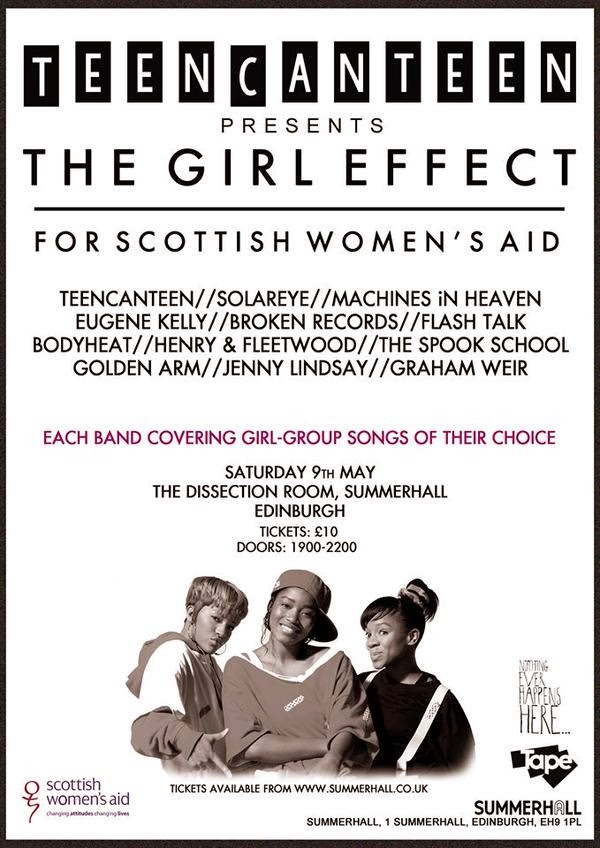 My sister Carla is the singer and songwriter in the band TeenCanteen and she has decided to organise a rather special night for her birthday this year in aid of Scottish Women's Aid.

Artists including Scottish indie legends Eugene Kelly (The Vaselines) and Duglas T Stewart (BMX Bandits) along with up and coming artists like Machines In Heaven, Flash Talk, Solareye and Henry and Fleetwood, will be covering songs of their choice by girl groups.

All artists have donated their time for free, as has the venue and technicians working on the show. So fingers crossed a lot of money is raised for Scottish Women's Aid. CLICK FOR TICKETS

Eugene Kelly has already confirmed he will be covering the All Saints classic Never Ever! Surely worth the £10 admission fee alone!


TeenCanteen have also confirmed that the songs Modern Girl by Sleater Kinney, the classic Nowhere To Run by Martha Reeves and the Vandellas, Freak Like Me by the Sugababes and the still incredible Push It by Salt n Peppa will be covered on the night.

I caught up with my sister to find out why this event is so special to her and to hear about her love of girl groups ranging from the 50's through to present day.


1) Why are you holding The Girl Effect in aid of Scottish Women’s Aid?

On the 2nd May I turn 30 this year (sorry to disappoint any TC fans - TeenCanteen is a way of life and not an age) and I am really looking forward to entering the next decade of my life. I'm excited about it! I feel like I've been stuck in my twenties forever.

As happy as I am about turning thirty, this year also marks it being 15 years since my Dad passed away. He passed away on 9th May exactly a week after I turned 15. I'm sad he hasn't seen the kind of person that I've turned out to be and often wonder what he would have thought of the choices I've made in life. For me turning thirty is cause for celebration, but it's also time for me to shut the door on feeling this way and move on. Because I'm sure his passing has greatly affected the choices I've made and the person I'm turning out to be. I wanted to do something for my thirtieth that was positive, that took my mind off negative feelings and promoted the things I believe in. I wanted the 9th May to be a date to look forward to and not one to dread.

I'd love to live in a world where organisations such as Scottish Women's Aid - wonderful as they are - don't need to exist because as a society we had managed to end gender inequality and we'd been able to treat and stop the causes of domestic abuse.
I hope that one day such a society will exist because I have two beautiful nieces that I want to grow up believing they can achieve anything they want without fear or prejudice. Until such a world exists I feel I should do my part to try and get it there.
Scottish Women's Aid mission statement - to end violence against women by tackling its root cause, which is gender inequality. SWA do amazing work to ensure that services and support are available across Scotland for women, young people and children with experience of domestic abuse - both physical and psychological - their work is vital. Scottish Women's Aid promote women's equality and children's rights and campaign for responses which actively prevent violence against women. They provide safe spaces - whether that be living spaces or online spaces - for women to share and communicate, seek help and get support

2) How did you choose the acts on the bill?

I've been lucky to play alongside a lot of bands that have become friends over the years. When organising an event like this you don't know who is going to say YES to playing - you ask and find out. I couldn't belive the overwhelming response from everyone I asked. My inbox filled up with YES.

It's a lot to ask - 'can you learn new songs, come and play Edinburgh and oh, by the way, can you do all this for free?' I wouldn't say I 'chose' the bands - I didn't deem one band worthy of asking over another. I just asked those whom I thought would share my same enthusiasm for, what has become, a project. Those who I knew I could work well with. There wasn't a back up plan in case everyone said no. 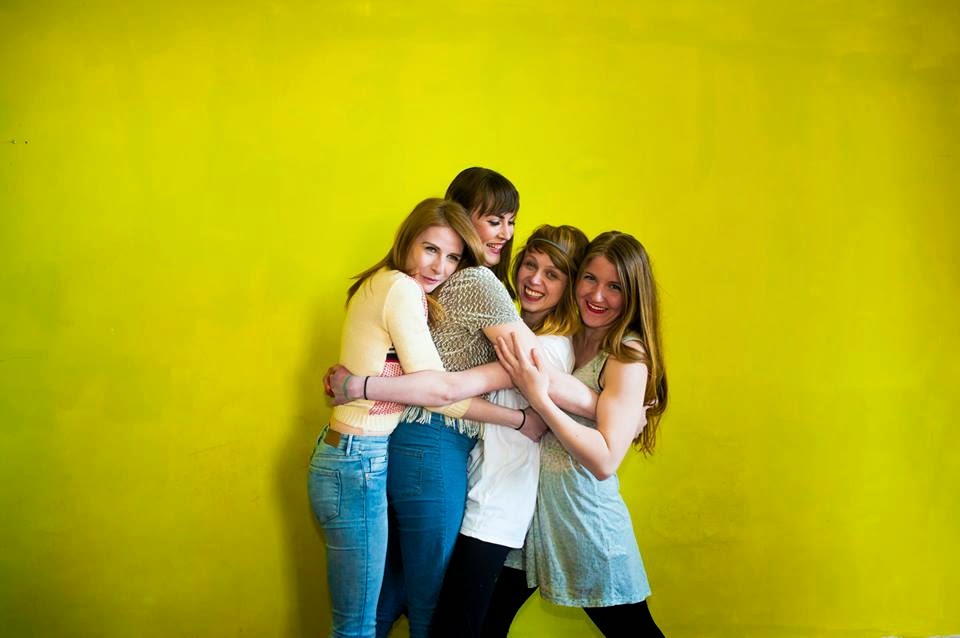 It was important to me to have a varied bill of bands - it makes for a more exciting evening. I have no idea what any of the performances will be like - that's a big part of the appeal - the anticipation. I can tell you that all the bands involved were asked because I have seen them live and thought they were sonically brilliant in their own individual ways. Throw in some Destiny's Child and (inevitably) glitter face paint courtesy of our bass player Sita - I know it'll be an exciting night. It'll be fun, hectic, we'll all be running around the place, I'm sure someone will forget a guitar lead or a keyboard stand and some of us might be singing off of sheets of paper - I CAN'T WAIT.


3) Can you remember the first girl group you heard and were into? What attracted you to them?

I can't remember what the first ever girl- group record was that I ever listened to. At all. I can only assume from my age that it must have been Bananarama. I significantly remember Shakespears Sister and Shampoo being on Top of The Pops. I remember Eternal but I didn't want to be in Eternal or emulate them in anyway. I was never a fan of their songs. I'll never forget the first time I saw The Spice Girls - they were so amazingly scruffy in the Wannabe video - so thrown together. I didn't so much as think of them as a girl group but as a girl gang. I wanted a gang! It looked like a lot of fun.

I'll never forget the day I first heard Arlene Smith's (The Chantels) sublime vocal burst out of my record player on the song He's Gone. I think I was 19. Her voice soared out of my speakers and epitomised heartbreak. She's one of the best female vocalists and songwriters of the last century. Or the first time I heard Mr Lee by The Bobbettes, a young and feisty girl group -  whoops and hollers of girlish delight from girls aged between 12 and 15 singing about a crush on their teacher.

I've been fortunate to witness Ronnie Spector sing live at The Arches when we went in 2009. The audience was full of young and old. Women, men, girls and boys. At one point we were standing next to an older couple who were hugging each other and crying. Ronnie was singing Be My Baby. I asked the couple why they were crying. They said to me 'it's the sound of our teenage years.' Have you ever heard anything so beautiful in your life?'

I looked at Ronnie on stage. Frail and sitting down, but still with masses of hair piled high on her head, war paint red lipstick and magic marker eyeliner singing straight from the heart.

I hadn't heard anything so gloriously youthful and universal in my life.

4) You know some of the songs that groups are covering; can you share them with us?

Everything is under wraps other than those mentioned above.

5) Finally could you tell us about 7 of your favourite girl group songs and why you like them?

SO HARD TO PICK!

1. The Cookies - Don't Say Nothing Bad About My Baby - The Cookies are my number one favourite ever girl group. I love Earl Jean's voice, it's like an iron fist in a velvet glove. This song is what spurred me onto my life consuming girl group obsession. I couldn't belive what I was hearing when I put the needle on the record. It changed my life forever.

3. Honey Cone - The Day I Found Myself - Darlene Love's kid sisters band. They were amazing! Holland Dozier Holland wrote a lot for them. The brass on this is phenomenal. Classic sisteryly advice song.

5. The Blossoms - Good Good Lovin - A great classic love song. I love the delicious 'oooohs' when they come in. Not so much a girl group as sounding like a woman group. Sultry pop.

6. Laura Nyro and LaBelle - I Met Him On A Sunday - Laura Nyro is perhaps my favourite songwriter and singer of all time. Gloriously mental arrangements. She has a habit of taking her songs into places you just weren't expecting them to go. This is her cover version of 'I Met Him On A Sunday' featuring girl group Labelle. I think it was recorded in her flat? It's so joyful when it all kicks in.

7. The Fuzz - Leave It All Behind - One album in 1971 ' The Fuzz'. One of the first popular recordings to feature female spoken word. A lot of written by Sheila Young. I wish there had been more albums.

8. The Cinderellas - Baby Baby I Still Love You - Quite simply I think this is one of the best pop song recordings ever. It has everything I need

9. The Bobbettes - Um Bow Bow - mentioned them above. They had a habit of writing nonsensical lyrics. But they ALL make sense to me. I still can't get over how young they were.

10. The Ikettes - It's Been So Long - I love Northern Soul as much as I love girl groups. Well, not as much. It's maybe my second favourite genre! This ticks both boxes. I found this on a Kent compilation a while back. Me and my friend Jenna used to play this a lot back in the days when we used to DJ together.
Posted by everythingflows at 12:09