I've been into Little Eskimos for a little over a year since they contributed their song 'Get Yourself Together Kid' to a charity album for Maggie's Centres.


I've caught them a few times since then, got on with their singer/songwriter (and lead Eskimo) Kevin and spoken to a number of people about them. I've never heard a bad word about the and or Kevin, with many people praising them to the hilt.


Reading between the lines, quite a lot has happened in the North Pole over the last couple of years and Kevin was a lone Eskimo for a while. May 2011 finds him with a band of fellow Eskimos and keen to push his songs forward, perhaps encouraged by winning an award at the SAMA's (Scottish Alternative Music Awards) earlier this year, or perhaps because (like me) he gets pissed off at some of the utter sh*te that is released and drooled over. 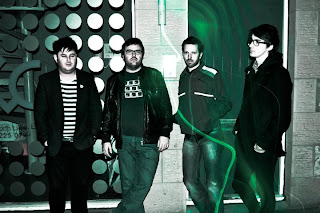 So this is the single; 'Rather Be Right' b/w 'Barcode Music' that will hopefully push the band forwards. With a number of releases and gigs planned I hope so.


I'm now on the fifth play, what more can I saw. It's a good f**king song. It is straight from the heart with the hook/chorus
you don't love me like I love you, you don't love me like I do, and it's harder to hold on
The aforementioned break see's Kev calming down from the rants in the verses, such as;
i miss the things about you that used to piss me off
oh baby what a cliche, oh baby what can i say
i'd rather be right, i'd rather be right than happy
It's a great choice for a single. The b-side, live favourite 'Barcode Music'  kicks off with huge crunching guitars, rocking like the Foo's. Perhaps taking the piss out of some of the bands kicking around, perhaps even an aim at himself during a writers block;
I wrote a new song, I wrote a new song, it sounds just like the last one
There is always a danger with live tracks failing to transfer to disc, but the recording maintains the ferocious live feeling of the song, but it's the a-side that does it for me, plus I'm about to nip out to play football so I need to finish this blog!
Check it out (and others) via Little Eskmos Soundcloud Page
The single is out on 27th June via itunes and all other places like that. Look for the band on facebook for updates, I know they are planning a single release party in their home town of Stirling.
Posted by everythingflows at 12:03