I read something recently that made me go hunting for my old Beta Band cd's. I do have a couple of Beta Band 7-inches, but it was the 3 EP's compilation that I was after and anyone who has that on vinyl is extremely lucky indeed.


I couldn't find them. I used to have all my cd's in alphabetical order. Now they are all over the place in the racks and on shelves, in piles on the floor. I need to spend a pleasant evening getting them into some sort of order. I'm pretty lazy, I've still not transferred all my cd's to my laptop and itunes as I still like to have an excuse to browse through them.


So I went on to YouTube and searched for 'Dry the Rain', my favourite Beta Band song. I was a bit shocked to discover that there isn't a video for it. Now the Beta Band were very careful with their art, they liked to be underground, not sell out etc etc. But this still surprised me.


There are some home-made efforts and there is a live performance from the Beta Band, but no video. Anyway, I'm blabbing on. The purpose of this blog was to highlight what a f**king brilliant song 'Dry the Rain' is and for me to reminisce about going to their last gig at the Liquid Rooms in Edinbugh. It may well be in my top 10 gigs of all time.


The Beta Band were suitably charged for a gig in their home city. They jammed, went off at tangents and when they played 'Dry the Rain' the place went nuts. My sister and I were down near the front and it turned out quite a large contingent of the bands girlfriends and close friends were too. So when the song finished we all kept singing the refrain/mantra. 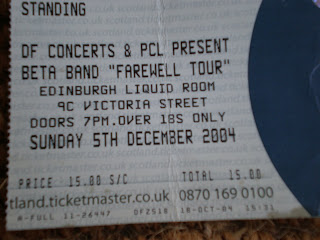 Of course when I went on YouTube and typed in The Beta Band, the famous scene from High Fidelity came up near the top and I couldn't resist watching it. I'll need to order it from Love Film as well, I used to have it on video tape! Check it out below;
Jack Black (Barry) on top form (in the film that made him unless I missed something) pushing a Jesus & Marychain album and bringing out Dylan's Blonde on Blonde and saying 'it's gonna be OK', Dick flirting with a girl over Green Day and pushing The Clash, and then Rob saying 'I will now sell 5 copies of The Three EP's by The Beta Band.' Just brilliant, I imagine Stephen Pastel and Dep in Monorail having conversations like that.
So there you have it, a glorious song. It's DIY indie, punk, folk, pop, euphoric, shambolic, funky, groovy....I love it. Check it out.
Posted by everythingflows at 11:29

Agh! I thought you were actually selling copies!

Do you have any photos from the Gig?