Miaoux Miaoux played Mono in Glasgow on Tuesday it was the launch party for his new single ‘Hey Sound’ b/w ‘Cloud Computer’ released through the lovely label Eli & Oz. I was pretty blown away.
It is a little over a year since I got hooked on Miaoux Miaoux, he was  playing a Glasgow Podcart night in the 13th Note shortly after the release of his ‘Blooms’ EP that I had ordered online. I then started managing him and I like to think we have had a pretty productive relationship to date and I am certainly excited about the next stage.
Not that being manager makes me biased, if I thought a song or gig was crap I would say so. Well I would say to Julian, I wouldn’t blog about it. I only tend to write about things I enjoy. 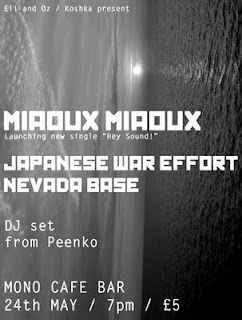 Miaoux Miaoux was superbly supported on the night by Nevada Base and Japanese War Effort and a DJ set by the lovely Lloyd from the Peenko blog. Sadly I missed Nevada Base’s debut show with new drummer Calum, although everyone seemed to be raving about his performance and that of the band when I arrived, just in time to see Japanese War Effort.
Jamie, who is Japanese War Effort, is clearly a guy who is head over heels in love with music and sound and all the variety that can bring. Jamie also plays in the rather gorgeous Conquering Animal Sound. Japanese War Effort is Jamie on his own, a chance to experiment a little more, to sing and to engage with the audience with his own unique sense of humour and personality, he is a very engaging guy. 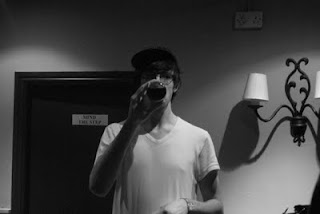 Highlight of the set had to be the song with the lovely lyric (something like);
‘why would you finger a stranger when you can f**k someone you love?’
Good question Jamie!
Lloyd from Peenko put a great big smile on my face when he played the Ghostbusters theme and ‘In The Jungle’ prior to Miaoux Miaoux taking to the stage. Mono is one of my favourite haunts in Glasgow, it has a record shop that is staffed by Stephen Pastel and the lovely Dep, it is out of the way – so people only go there for a purpose; the aforementioned record shop, the selection of vegan food, the atmosphere, the art, the people.....It also has a nice big sky dome that lets in natural light, unlike the huge collection of basement venues in Glasgow.
Julian played a magical set that spanned his discography to date and beyond; ‘The Colours of Glass’ was the perfect set opener, taken from the debut instrumental album ‘Rainbow Bubbles’. It allowed Julian to play with his gadgets and show off his ear for melody. It all looks so easy. I forget the exact set order but I think ‘Pixellated’ from the 2010 ‘Blooms’ EP was next. It was the best I have heard it.
Miaoux Miaoux’s music, ear for sound and productions skills as been quite widely written/blogged about, yet lyrically this guy is pouring his hear out; either about falling in love, being in love, having doubts, breaking up, making up and around again.
Every single day, of every single life, starts to vibrate alive in the summer time
You are a power source, you are an atom bomb, you are nothing at all 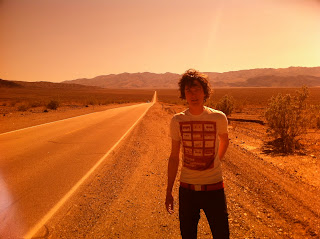 New song ‘Autopilot’ has been generating a great response when played live since its first outing earlier this year. Last night was no exception, the squelchy bass and semi distorted beats set the tone, with Julian’s angelic voice
'it's very sad to see you,this unhappy,
when you're with me'
Julian is a tall guy and can spend a lot of the show hunched over his equipment, so when he stretched to his full height and curled his arms around the microphone, eyes shut and sang;
'I love you and I'm leeting you go'
It was pretty powerful stuff, 'Autopilot' is an emotional song.
Last years single ‘Knitted’ (that came out in knitted sleeves and there is still 6 or 7 left) is sublime. Beautiful electronic pop with almost wah wah style guitar.
‘and it’s your fault, and it’s mine, and it’s nothing, and it’s all of the problems, and it’s beautiful.....’
And on to the single that was being launched on the night. 'Hey Sound' is pure pop, yet clever with it with the closing instrumental taking on an almost tribal feel.
The b-side is the instrumental 'Cloud Computer' that contains a gloriously beautiful guitar riff that always remains with me for days after I hear it. 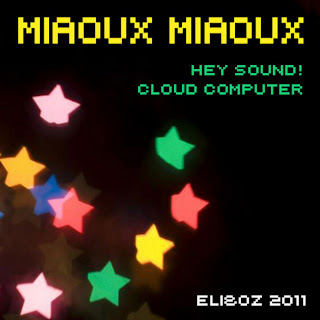 It was brand new song 'Stop the Clocks' that stopped me in my tracks last night. Opening with a folkie guitar riff over a huge beat before morphing into epic electro and closing in a blast of white noise.


Julian had played me a very rough demo a few months back, him with an acoustic guitar riff and vocal melody. To hear the finished live result was a amazing, I can't wait to hear it on record.


'Snow' ended the set, the glorious guitar riff went on for ages, the vocal refrain was sung lustily by a few in the crowd.


This was an epic performance, I look forward to the next one. Come King Tuts in July, Miaoux Miaoux may be finished his album. I hope there is a label out there that will take it on and give this fabulous artist the exposure he deserves.
Posted by everythingflows at 07:48

DreamHost is ultimately one of the best hosting company with plans for all of your hosting requirments.