I was too young to get into the Bunnymen in their 80's pomp, however when they released the glorious 'Nothing Ever Lasts Forever' in 1997 it was enough to prompt me to explore their back catalogue; especially after catching them at the Barrowlands that year. McCulloch was icy cool, the band were bathed in dry ice, this was guitar pop with ambition, style, an edge and confidence.


My friend has just bought us front row tickets for their Glasgow Royal Concert Hall performance of their 1984 self proclaimed masterpiece 'Ocean Rain'. So I thought I would revisit the album. 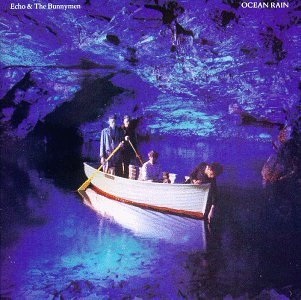 As opening songs go 'Silver' is impressive. It flows along and McCulloch is in great form

'just look at you with burning lips, you're living proof at my finger tips'

The song, like a lot of the album, is allowed the space to breath and develop, with acoustic guitar underpinning everything, allowing Will Sergeant's chiming guitar to shine when used and the strings lift the song towards the end.

There is quite a dramatic change in style for 'Nocturnal Me' with the bands love of The Doors (they later covered and released 'People Are Strange') influence shines through. The music has an operatic feeling to it with a military style beat at moments. The 35-piece orchestra employed by the band for this album get free reign to add to the dark and moody atmosphere.


You can pack a lot into a 2 minute and 26 second pop song, as admirably demonstrated by the Bunnymen with 'Crystal Days' . Like 'Silver' the acoustic guitar drives the song along without being over-bearing, almost in the background. I wonder how much of the album was written on acoustic guitar.

McCulloch uses every trick he can on this album and the recurring use of 'hope' in each verse is extremely clever. The first verse has the line above and the second verse is;

While the third verse goes back to the first but replaces the second 'hope' with 'know'. It is so simple, yet so effective. As is the electric guitar riff that kicks in after every chorus, I could probably learn it in a day. Simple and pure pop.
The song is under two and a half minutes long yet there is still time for a lengthy solo with strings,  'Crystal Days' has become one of my favourite Bunnymen songs. 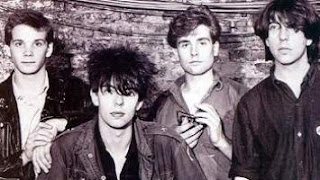 'The Yo Yo Man' revisits some of the darker LA bands from the 60's like The Doors and Love.

If I'm honest, it isn't one of my high points of the album, yet it still showcase the bands music ambition and McCulloch's poetic skills.


'Thorn of Crowns' is one of the strangest songs in the Bunnymen cannon, sounding like a loose jam at times with crazy lyrics, exploding into a glorious yet all to brief riff at 1 minute 27 seconds (and 2mins35) at others, white noise and feedback on occassion.


C-c-c-cucumber
C-c-c-cabbage
C-c-c-cauliflower
Men on Mars
April showers
If 'Thorn of Crowns' sounds like it was conceived out of (or is) a jam, then the remaining tracks on the album are absolutely sublime examples of songwriting and the Bunnymen at their majestic best.

'The Killing Moon' is just f**king fantastic. It flows and it glows. Mac is at his poetic best


In starlit nights I saw you

The song rises at the right moments, it takes the listener on a journey and Mac is the pied piper, with songs like this it is no wonder that devoted fans followed the band around the UK to places as exotic as Shetland as they attempted to mark out a tour map in the shape of a bunny!
The strings are gorgeous, Sergeant's guitar knows when to be heard and when to remain silent and yet again the acoustic guitar lets the song breath and flow. The song got to number 9 in the UK charts when released as a single. Check this video of the band playing it live on The Tube back in the day.
If 'Crystal Days' shows what the band can do in under three minutes then 'The Killing Moon' is the platform for them to show what they can do in just under six - stunning!
'Seven Seas' keeps the momentum going and it is more pure pop with acoustic guitar, chiming electric, Mac crooning and strings soaring. The bass riff holds it all together. 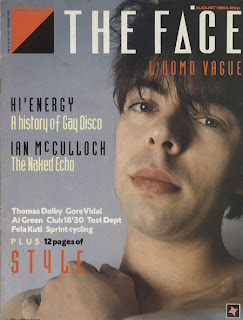 'My Kingdom' gets into the groove from the off and McCulloch is in playful mood with his lyrics and delivery, all underpinned by by Will Seregant's acoustic guitar before he lets loose on electric at the end. McCulloch's love of the Velvets/Lou Reed is highlighted with the 'do do do do do' section.

i
s heart breakingly beautiful, f**king gorgeous, so slow and aching it hurts. It all sounds so simple and easy, yet this is songwriting and music of the highest quality.

'Ocean Rain' (album and song) is the sound of a band in top form, they show off their skills, influences and ambition. The orchestra reaches for the stars in the break at 2 minutes 30 seconds, the guitar riff /solo is just exquisite and McCulloch's croon is Sinatra-esque.


What makes the album so special - well all of the above. Th albums stands up as a body of majestic work and at its peak it reaches truly magical moments that the vast majority of bands can only dream of. The Bunnymen had the look, the attitude and songs to inspire genuine passion amongst fans, on a cult and international scale.


Check it out if you don't own it. 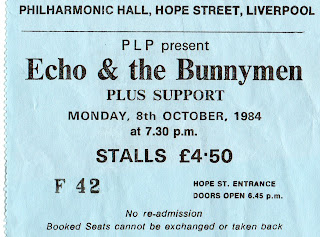