I first heard about their collaboration project a few years ago and in 2009 the two of them played the Shoeshine Records night at Celtic Connections, then....nothing, apart from rumours on the Teenage Fanclub forum. Norman had a Fanclub album coming out in 2010, so the project was shelved.

Thankfully the project, now named 'Jonny', has been revisited with the release of an album and a tour.

The opening paragraph is a short summary of the album. When Norman and Euros are at their best, the songs are glorious examples of warm guitar pop. The album also highlights their playful nature and the fact that it came out of jamming sessions.

The opening track 'Wich is Wich' is a play on words and the sound of two friends sharing their sense of humour, a knock out fun jam.

The second song and the debut single 'Candyfloss' lifts the bar considerably as the pair show us what they can really do, a perfect 3-minute sugar coated pop song that is aptly named. Check out the video below;


'Waiting Around For You' sounds like a simple jam, a fairly basic 60's riff with Norman and Euros having fun with the lyrics, hooks and harmonies. 'Goldmine' is more of the same.

'You Was Me' is another simple riff with gorgeous harmonies floating effortlessly over the top. Norman and Euros Celtic voices combine to stunning effect.

'Circling The Sun' is Norman at his best. One of the nice things about this album is its immediacy. You can tell it was written and recorded relatively quickly and simply.


Changing skies
Turning Tides
There's a heartache I can't hide
Winters long
Winters cold
Without you
On first listen I thought my itunes must have skipped to an obscure McCartney track that I didn't remember, however I checked, and it is indeed Norman and Euros with the song 'English Lady'. Punchy, catchy, with real Macca style bass as well as the vocals and the lyrics. 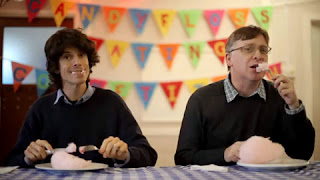 With 13-tracks on an album coming in at 40-minutes long (despite one song coming in at over 10-minutes) the vast majority of songs come in at around or under the 3-minute mark and the next song up 'The Goodnight' is one of those. There are no drums, just acoustic guitar, keyboard and the two voices combining.

'Bread' by Euros is next and it is a hymn to bakers everywhere, it sounds like it is straight out of the period of the 60's where everything was dipped in LSD.


Hats off to those that make the bread
One night I had a dream
Of a land where things aren't quite what they seem
People young, old, short and tall
They weren't happy, they had no bread at all
'Cave Dance' is just pure Blake and Childs humour. They played it at the previously mentioned Celtic Connections gig and they clearly had a lot of fun doing so. It sounds like they did when they recorded it as well!
It's another basic late 50's/early 60's riff and beat and the lyrics play on the songs that called upon teenagers to 'do a dance'.

'I Want To Be Around You' is 2-minutes of harmony heaven. Simple guitar pop that leaves me feeling warm inside and with a smile on my face. They make it seem so easy.

'I'll Make Her My Best Friend' is also close to the 2-minute mark and it could be described as a country jaunt, rather apt as the lyric is;


when i get back to the country, i'll make her my best friend
'Never Alone' is quite simply beautiful and a shining example of why I have followed Norman Blake and Teenage Fanclub since 1991 and the release of Bandwagonesque.
It tugs on the heartstrings,
there's been nights when, I can't sleep
have i fallen, in too deep
come back where my heart is calling you
come back to your home
come back to me now you'll never be
never alone
It is Norman backed only by a keyboard and Euros on harmonies, it is my song of the year to date and it is only 1 minute 50 seconds long. 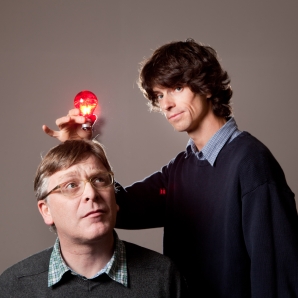