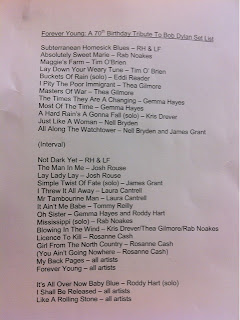 I've just about recovered from a quite sensational concert at the Royal Concert Hall on Monday night.


Rising Scot's singer-songwriter Roddy Hart curated a magnificent bill of artists to pay tribute to the legendary Bob Dylan as part of Celtic Connections and celebrate the year of his 70th birthday.


At one point during the night, a visibly moved Hart recalled making the pitch for the concert to the Director of Celtic Connections, thinking that he may agree to a venue the size of King Tuts or Nice n Sleazys. However when the Director agreed to the gig, Hart was encouraged to pitch for the Concert Hall and was successful. Hart then set about inviting artists to join him, contacting Roseanne Cash via Twitter and proving successful.


If Hart was surprised by his success, I imagine no-one in the audience would have been. Hart was polite, genuinely passionate, talented, engaging and the perfect host, admirably backed by his band The Lonesome Fire for the night.


With all of the effort and time invested into the concert it was fitting that Roddy and The Lonesome Fire should open proceedings and they did that in fine style, roaring through 'Subterranean Homesick Blues'. 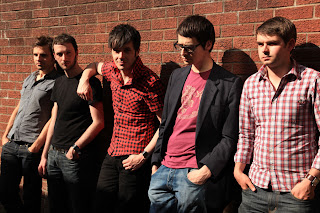 
If Hart deserves huge credit for the night he put on, so too do the staff at the venue who ensured that the artists got on and off stage to join Roddy and the band for all of the songs.


The show started at 7.30pm sharp and finished at 11pm with a break in between, there was a lot to get through so lets crack on. The fill setlist is above so here we go.


Rab Noakes joined the band for a loving stomp through 'Absolutely Sweet Marie', keeping up the pace set from the opener, before Tim O'Brien and his band took us on a country tip for 'Maggie's Farm' before RH&TLF rejoined them for a gorgeous 'Lay Down Your Weary Tune'.


That was followed by one of my personal highlights of the night, a beautiful solo rendition of 'Buckets Of Rain' by Eddie Reader. Her voice was beautiful and her guitar playing exceptional.


Thea Gilmore then came back on with the boys and sand 'I Pity The Poor Immigrant' before launching into a stunning 'Masters of War', introducing it by saying it is still so meaningful today. It was powerful stuff and she rightly received rapturous applause. 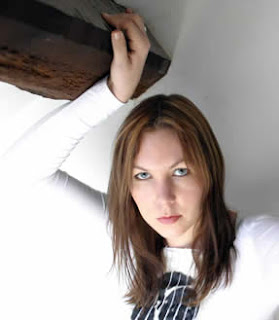 Gemma Hayes was up next, an absolutely gorgeous singer from Ireland with an equally gorgeous voice and a nice cheeky smile. The crowd responded warmly to her song choice of 'The Times They Are A Changing' before a beautiful rendition of the modern Dylan classic 'Most of the Time'. 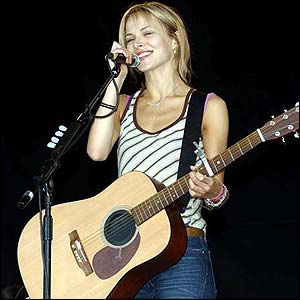 Kris Drever was up next with a solo rendition of 'A Hard Rain's A Gonna Fall' before Nell Bryden and the band played a great version of 'Just Like A Woman' and a romp through 'All Along The Watchtower' with James Grant on soaring guitar. Taking us to the break, phew!


Every artist had a beautiful voice but the power in Nell's voice was something else, powerful and soulful.


Roddy and the band kicked things off with a beautiful take on 'It's Not Dark Yet'. The band were absolutely awesome throughout the night, top marks to them and Roddy for the hours of rehearsal they must have put in. 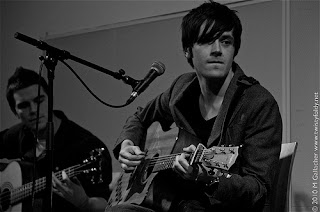 Josh Rouse, a funky wee guy, came on for a song I wasn't aware of but I'll be searching for called 'The Man In Me', following it up with a brilliant take on 'Lay Lady Lay'.


The band got a wee break while James Grant returned with a solo take on 'Simple Twist of Fate' before Laura Cantrell wowed the crowd with her takes on 'I Thew It All Away' and 'Mr. Tambourine Man'. She must like the 'Live At Buddokan' album as the rendition of the latter featured the flourishes in that Dylan version.


Young Scot's singer Tommy Reilly came on with his best Dylan impression on'It Ain't Me Babe', looking a bit like a young Dylan, if a little nervous at the size of the crowd.


I was then jealous of Roddy Hart as he got to share the vocal duties with Gemma Hayes on 'Oh Sister', their harmonies combining effortlessly. Rab Noakes then played a fantastic solo version of 'Mississippi'.


And still they kept coming....


'Blowing In The Wind' was a joy before the star of the show (well that was really Roddy Hart & The Lonesome Fire) Roseanne Cash came on, opening with 'License To Kill' before a great version of 'Girl From The North Country' that her Dad had recorded with Dylan. 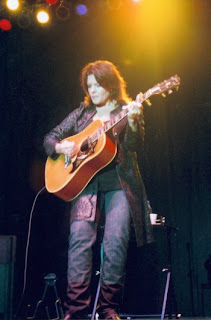 Roseanne was at ease, oozing confidence and personality and she had the crowd singing a long to 'You Ain't Going Nowehere' before Roddy invited all the artists back on for 'My Back Pages' and 'Forever Young'.


After a huge standing ovation Roddy came on solo to play 'It's All Over Now Baby Blue' before everyone joined him for renditions of 'I Shall Be Released' and a romp through 'Like A Rolling Stone'.


This was a great, great night and one I will remember for a long time. Top marks to Roddy for organising such an enjoyable and successful evening.

Great review! Like you I thoroughly enjoyed the night and the level of performance sustained was remarkable.

Too long? I'd have taken another hour!