Spiritualized at the Old Fruitmarket Glasgow 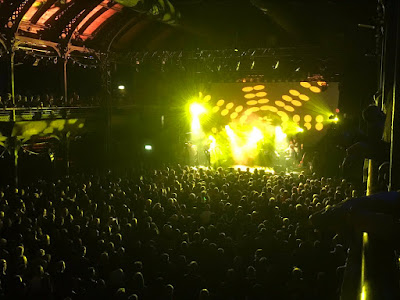 Jason Pierce, AKA J Spaceman and his 9-piece band who currently make up Spiritualized, played an astonishing show in Glasgow last night.

The packed Old Fruitmarket was gripped from start to finish, taken on a 2-hour journey into Pierce's world, his universe, his heart and his soul.

The show had originally been scheduled for the Kelvingrove Bandstand but had been moved, many debated if this was due to poor ticket sales, but the Fruitmarket was packed and it quickly became apparent that Spiritualized may have been moved as their show might have been too loud for the leafy West End.

The Old Fruitmarket is a truly beautiful venue in Glasgow's Merchant City and the audience seemed to collectively hold their breath as Spiritualized walked on to the stage with Pierce coming out last in leather trousers, a black shirt and shades, taking a seat side on to the crowd with his band placed in a horseshoe around the stage.

Last night was a real sonic, visual and soulful treat. Come Together was powerful, like an assault on the senses with a stunning light show. Shine A Light was spine tingling, the three gospel singers to Pierce's right took it to a holy place.

The lights went down and a starry sky displayed behind the band, the intro for Stay With Me sounded all phased and spacey, it felt like we were being heading towards the stars on J Spaceman's trip.

Pierce's ability to fuse rock n roll, gospel, psychedelia and gorgeous simplistic nursery rhyme style melodies was on full display. It was gripping, the raw emotion that soared with intensity and swooped with ease was quite breathtaking.

Soul on Fire was sensational. Pierce expresses himself so beautifully, often with real simplicity, always with complete honesty.

Baby, set my soul on fire
I've got two little arms to hold on tight and I want to take you higher

If rumours are true, the And Nothing Hurt album could be the last Pierce releases, these shows, so sporadically spaced out, may be the last. I sincerely hope not.

My sister and I climbed to the balcony towards the end of the set and looked down on Pierce, the band and the audience. It was perfect. The sound, the lights, the songs, the emotion ... beautiful.

Pierce can find a hook or a chorus and keep it going, adding on layers, lifting it higher and higher, bringing it down and lifting it again. The encore began with So Long You Pretty Thing that was life affirming, it continued with an astonishing Out Of Sight and then went stratospheric with a cover version of Oh Happy Day that was joyous before Pierce and his sensational band ended with Hold On.