Ten years have passed since I last saw Noel Gallagher live. He was still in Oasis, playing at the SECC, but he didn't give the impression he wanted to be there.

Last night, the contrast was stark. In the wonderful setting of the Edinburgh Playhouse Noel Gallagher was full of energy, helped by his (at times) 11-piece band and lifted by a crowd in splendid voice.

There were horn players, 4 backing singers at times, keyboards, percussion - and yes the scissors did make an appearance during She Taught Me How To Fly.

My brother came up trumps with tickets in the 4th row and after a lengthy wait at the bar to stock up on beers we got to our seats in time to catch the last few songs of Gaz Coombes set. Gaz was looking as super cool as ever, sounding even better. His last two albums have been sensational and it was great to see Gaz and his band blast through Detroit with Coombes conducting his backing singers.

On to the main event. An intro playlist blasted out northern soul, a bit of The Jam and a wonderful psychedelic cover version of Eleanor Rigby that I'll need to search for later.

The full lights went up for a couple of minutes and then dropped, the venue descended into darkness as Noel and his High Flying Birds strode on to the stage.

And oh how they flew last night. Ripping through Fort Knox and Holy Mountain to get things going, before a brief pause and into Beautiful World and then She Taught Me How To Fly. We then had 2 new songs; single Black Star Dancing which had a good live groove to it considering it is such an early outing and Rattling Rose, introduced as a b-side, but no-one knows what a b-side is these days as no-one buys an f**king records!

Noel spotted a young boy in the third row just along from us and asked how old he was. 8 was the answer and Noel said he would be far too young to know the next song, introducing Talk Tonight as 'one for people wearing anoraks.' He then spotted someone just along from the young lad who was much older and who was wearing an anorak. Noel even got him to put up his hood.

It was a wonderful full band version of Talk Tonight and the Edinburgh Playhouse sung heartily and soulfully along. Then it was into The Importance Of Being Idle before a truly stunning Little By Little with a classic huge Gallagher bridge into the chorus that was belted out, arms were raised aloft, the sky was punched and friends embraced to sing-a-long. 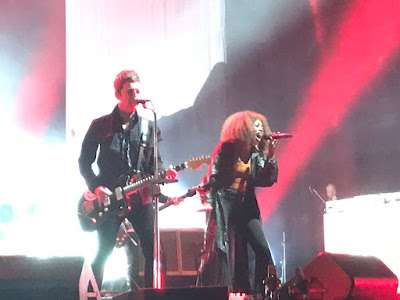 There are plenty of people who dislike or just don't get Noel's genius, or they think it is cool to dislike him. But if they had been at the show for this moment then they couldn't deny his songwriting and unique ability to generate terrace style anthems. It was spine tingling.

Back to the crowd and Noel's comment about 'anoraks', having previously called Liam's fans 'parka monkeys'. The crowd was very mixed in age and sex, there were plenty of anoraks/cagoules and the odd Liam/Weller haircut, but by in large this was a very different crowd to a Liam show - and I think that suits Noel down to the ground.

My favourite song from Noel's solo output is Dead In The Water, the last track on Who Built The Moon, recorded while he was in a radio studio. I'd pay good money for a night of Noel Gallagher armed only with an acoustic guitar and a microphone. Noel's voice was beautiful, all melancholic and tender but capable of rising with feeling and soul for the chorus.

Let the storm rage, I'd die on the waves
But I will not rest while love lies dead in the water

Noel seemed taken aback by the audience response as every single person in the room seemed to be singing along with him. It's up there with his best songs. 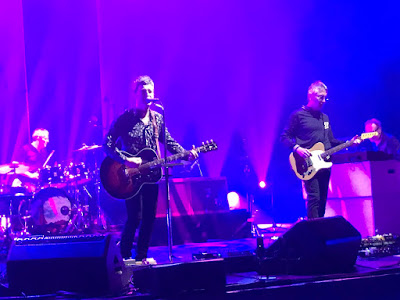 I'll not run through every song, but I have to mention the last 4 before the encore. A sensational run of The Masterplan, Wonderwall, Half The World Away and Stop Crying Your Heart Out which Noel introduced by saying he was going to play the demo version.

I took time to turn round and look at the crowd, a sea of smiles, of hugs, of euphoria, of people lost in the escapism and romanticism of some of Noel's best songs. Three tiers of emotion and love for the songwriter and his songs. It was a beautiful sight and a beautiful noise.

There was more to come. A romp through What A Life! and a glorious Don't Look Back In Anger before ending with a cover of The Beatles All You Need Is Love.

25-years ago last month I saw Oasis for the first time at the Tramway in Glasgow. It's been a rollercoaster ride, some skyscraping highs, a few lows and plenty of loops and spins along the way.

Last night rekindled my love for Noel and his songs. His new stuff sounds even better live than on record, he played with real energy, his band were superb and he has an unique catalogue of songs to delve into to keep things fresh for him and his fans.

My brother and I reminisced on the way home about seeing Oasis at the Barrowland Ballroom back in December 1994 when Liam walked off after 4 songs and Noel played acoustic before the band backed him at the end. We got an early glimpse into his genius as a songwriter and a leader, we still talk of his version of Slide Away that night. All he has ever wanted to do is write and play songs, he is over the nonsense that came with Oasis, of touring with Liam and the stress that brings. 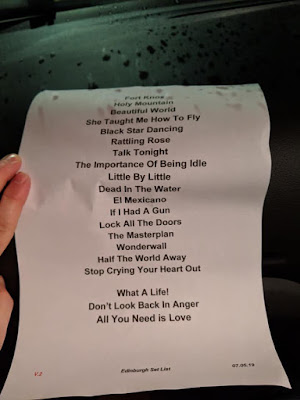