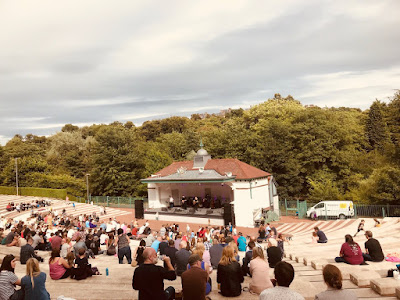 Yesterday, at the Kelvingrove Bandstand, the strong sense of community that Last Night From Glasgow (LNFG) has generated in a little over 2-years of existence was highlighted, amplified and displayed on its largest scale yet.

Collaborations, partnerships and friendships with artists (musical and visual), venues, other labels, label members and fellow music fans has been at the heart of the LNFG from the off, helping to create special and memorable atmospheres. To see that transfer from venues like the Old Hairdressers, the Hug and Pint and Stereo to the Bandstand made me feel quite emotional at times.

With the support of Glasgow Life, Last Night From Glasgow reached out to fellow DIY labels Scottish Fiction, Olive Grove, LP Records and Foxstar Records to curate and deliver 8-hours of music in a truly stunning environment. In keeping with the sense of community and social responsibility, there was a collection and raffle in aid of SAMH. 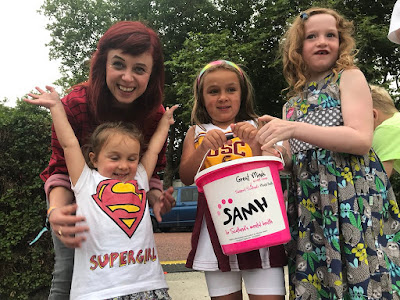 As the name of the event suggested, this was happening come rain or shine. Other than a tiny couple of spitting showers, the event was dry and at times the sun even popped its hat on.

With 2 young kids we didn't arrive until after lunchtime, getting in just after 2pm to meet friends and in time to see Cloth, a recent signing to LNFG who have stirred quite a bit of interest through their debut single Demo Love, a dreamy, almost shoe gaze-y (lazy blogging!) slice of gorgeousness. I was keen to hear and see more. The three piece of two guitars and drums (and a little bit of programming?) were playing only their 3rd show and watching from the back I was impressed with their dreamy sound and immediately wiped out my shoe gaze-y take on the band - there was also a kind of The XX vibe to them. The chilled grooves and sounds that they created were beautifully backed by the incredible greenery offered by Kelvingrove Park behind the Bandstand. I really like them and look forward to seeing them again. 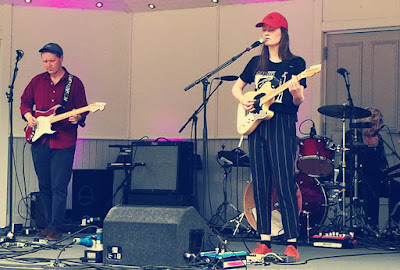 Codist created a glorious racket. At times they rocked out, at times their was a popper edge to their guitars, at times reminding me (in a good way) of a lot of the bands I listened to as a teenager. With an album coming out on LP Records this is another band I'd like to see again.

I'd caught my sister Carla J Easton playing in a flat the night before (see previous blog) and now she took to the stage with her 5-piece band, opening with the psychedelic pop of Bird In The Sky from her Homemade Lemonade album released under her Ette alias. Recent singles Lights In The Dark and Wanting What I Can't Have went down well, while Milk and Honey was a joyous romp. Carla's debut album under her own name will be out on Olive Grove Records in September/October. Her band were superb, Calum Muir on drums was on fire, the sparkling guitar riffs generated by Rory from Ava Love (Bwani Junction) were perfect for the event and the sun shining through, Gus on synths and backing vocals looked impeccably cool and Paul Kelly on bass generated great grooves. 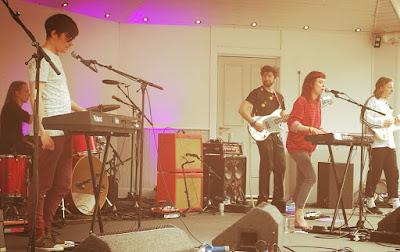 Mt Doubt are a young band that I have only seen at one of the Girl Effect charity shows my sister has put on, so this was the first time i had seen them performing their own material. I was mightily impressed. Their album released via Scottish Fiction won them many friends and fans and it was easy to see why. Leo Bargery and Annie Booth almost co-front the band, they look fantastic and gel with ease, their voices can vary - deep, rich, soulful, pure and true. And they create a brilliant sound - definitely ones to watch. 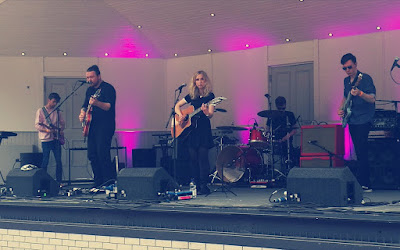 Medicine Men strode on to the stage with a purpose, they hadn't been shy in voicing via social media about how excited they were by the prospect of playing the bandstand. Opener Show What You're Made Of surged and soared, sounding made for an environment like this. They played a blistering set with Ceiling To Floor probably being my real highlight of the day. Psychedelic guitar pop with an urgent and soulful vocal by Ian Mackinnon. Set closer Out Of The Light is electronic guitar bliss, a Chemical Primal Scream Brothers beauty with a great groove. The band were in tip top form and I look forward to hearing what they come out with next. The one new song they played sounded very promising and they even threw in a Flock of Seagulls cover! 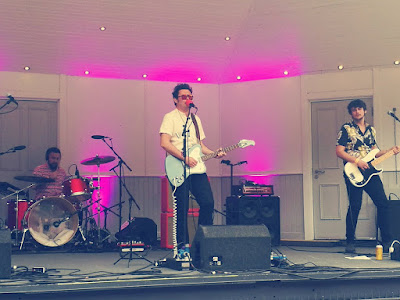 An emotional Ian Smith from Last Night From Glasgow took to the stage to introduce Warren McIntyre and the Starry Skies, thanking all the bands, labels, volunteers, Glasgow Life and everyone for coming.

It was great to catch up with Ian, the driving force behind the label. We looked out at the crowd and laughed and marvelled at the scale of the event, thinking back to our first meeting with 4 friends to form the label. It's come a long way in that time and that is largely thanks to Ian's exceptional drive with the incredible support of his wife Julia who was celebrating her birthday. It was notable that they received thanks and recognition from everyone - richly deserved.

Warren and his band played a beautiful set, opening with a song called Be Kind that seemed to encapsulate everything that Warren stands for - an extremely lovely (and handsome), positive and kind person.

The Starry Skies are extremely talented musicians, even though they were short of two of the regular members of the band, they all gelled with ease and the songs flowed effortlessly. Closing song Let Love Come Back To You was a highlight of the day, a great guitar pop song with the kind of hooks and chorus that implants itself in your head for the rest of the day ... and the next day! Warren and the Starry Skies will be releasing a new album in October.

A great day of music in a stunning setting.

Photo by Scots Whay Have