Nick Cave at the Glasgow Hydro

At the end of September my social media feeds were awash with reports of Nick Cave giving an exceptional performance in Glasgow. I posted and tweeted that I'd be happy to accept a guest review and John Welsh kindly responded...only I didn't notice the email until much later!

Sorry for the delay John, but this is a great blog and you are very welcome to write for Everything Flows again in the future. 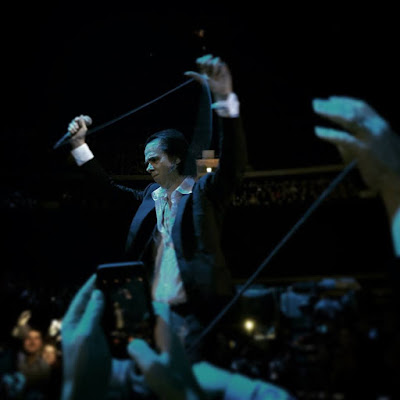 Let’s cut to the chase. A substandard Nick Cave gig is as rare as hen’s teeth and on this effort the prodigious Antipodean certainly didn’t disappoint.

Kicking off with a trio of songs from the most recent studio album, Skeleton Tree, it was an understated beginning to the gig, the melodies of Anthrocene, Jesus Alone and Magneto almost muted and ethereal in their delivery.

Any question marks about how the Bad Seeds intricate sound would come across in the huge arena environment were quickly dispelled form the start. Indeed, the wider space and scope worked well, with multi instrumentalist and Cave’s partner in crime, Warren Ellis driving the band forward to increasing heights of musical ingenuity.

Higgs Bosom Blues and From Her To Eternity saw the band and Cave break out, the latter cinematic in its elegance, and at times violently brutal in its delivery. The band approached each song with equal measures of venom and subtlety, resulting in a mesmerising soundscape of riffs and soaring melodies from perhaps the world’s finest (rock) lounge band.

Red Right Hand, against a sleazy, crimson backdrop which wouldn’t have looked out of place in an episode of Twin Peaks was well received, guitarist George Vjestica sliding rhythms shining through. The hunched, menacing spectre of Cave’s lithe shadow, seemingly snaking up and around the Hydro walls merely added to the thrill.

Throughout, Cave was on fine form with quite a bit of humour evident. Leaning into the crowd at one point he commented “this is sexual harassment” as perhaps someone grabbed a bit more than was expected.

The Weeping Song kicked off the encore, Cave wading through the crowd to deliver his sermon atop a camera gantry, before leading fans to the stage for a tumultuous Stagger Lee and the set closer Push The Sky Away.
A triumph. 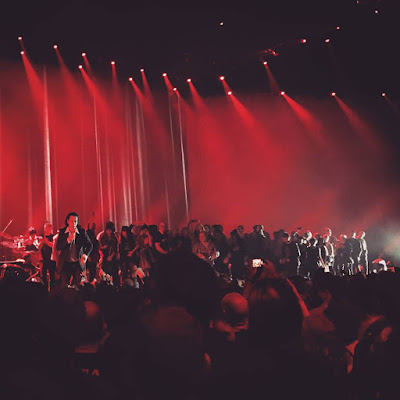 Photo by Rachel McLean
Posted by everythingflows at 01:03