I can't remember the last time I was at a gig in Stereo. I'd forgotten what a cracking little venue it is - conveniently located near Central Station, yet hidden away down Renfield Lane, shielded from some of the mayhem that the centre of Glasgow can bring at times.

Last night was the launch of Miaoux Miaoux's School of Velocity, his second album on Chemikal Underground. The exposed brick work and industrial pipes running through the basement venue kind of transports you to New York or Berlin. Stereo has a wonderfully relaxed vibe in the upstairs bar and that transfers downstairs.

We caught the end of Kill The Waves, impressed by the soundscapes the 6-piece created on stage. I had high hopes for Monogram after falling for their song Romance that was released last year, picking up some airplay including some from Radio 1. They didn't do it for me last night though - the drum sound overpowered pretty much everything else; the singer (admittedly) wasn't in the best of form - blaming it on burrito he had pre-gig. Romance was a clear highlight in the set and they have set the bar high with that song - fingers crossed they can reach those heights more often in the future. It is early days for the band - they only played their first show in April.

On to the main event - Miaoux Miaoux; Julian Corrie backed by his trusty sidemen on bass and drums and also joined by the beautiful Cairn String Quartet on a number of songs.

With no expense spared on the silver balloons spelling M I A O U X the band set about showcasing the talented Corrie's tunes from his two Chemikal albums.

Luxury Discovery from School of Velocity was a highlight with Julian proclaiming 'Oh my god, it really is beautiful to me as well' before going into a glorious falsetto with echoes of Pharrell crossed with Chic. 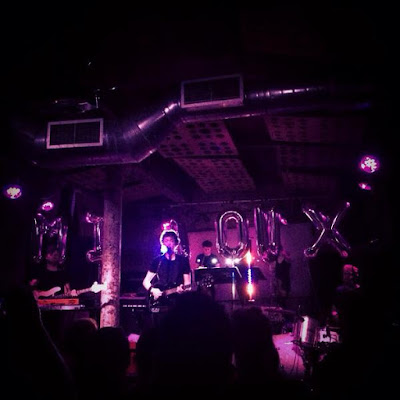 Hey Sound! was the point in the gig when the crowd started dancing,. An extended version allowed the band the time and space to jam on and really find a groove to get lost in along with those dancing in the crowd.

Lead single It's The Quick was another that got even more people moving with the effects on Corrie's vocals bringing something a little different; the pulsating synth riff turns into a monster when the bass kicks in.

The closing Stop The Clocks is one of my favourite songs and last night the addition of the Cairn String Quartet took it to even greater heights of beauty.

I'll be reviewing School of Velocity in the very near future - it is out on Chemikal Underground next week. I got an advance copy last night and on first listen Miaoux Miaoux has produced a beautiful work of art.