The New Mendicants at Bowlers Bar

A Tuesday night in Bridgeton soundtracked by the beautiful voices and songwriting talents of Norman Blake and Joe Pernice and £2.70 a pint of Guinness. If Guinness did gigs in small East End Bars....

The New Mendicants are Norman Blake (Teenage Fanclub) and Joe Pernice (The Pernice Brothers), thrown together by chance (neighbours in Canada) and a Nick Hornby novel. Their debut album Into The Lime showcased their songwriting talents and harmonies, put them in a room with a couple of acoustic guitars and a glockenspiel and they are an absolute joy to watch.

I debated whether to drive to the venue or get the train and have a couple of midweek drinks. As the gig was in such a different venue, it was 13-minutes on the train from Uddingston to Bridgeton and the venue was a stones throw from the station; I opted for the drinks and was pleasantly surprised by the price of a pint.

My brother was running a little late so I waited outside for a wee while, long enough for a young guy to walk by and offer 2 smokers the chance to buy a £350 bike for £50....

I decided to just head in and leave Ross' ticket at the door. My friends Lorna and Colin were in, so I grabbed a Guiness (did i mention it was £2.70 a pint?) and caught up with them while watching the end of support act Ella the Bird who had a gorgeous voice and looked pretty gorgeous as well.

Ross arrived and we headed towards the front of the small bar to catch up with fellow Fanclub nuts Barry and Macca. Both were in good form and looking forward to the bands forthcoming show at Kelvingrove Bandstand.

Joe and Norman worked on a list of songs as they prepared to get underway. It was a lovely informal show. 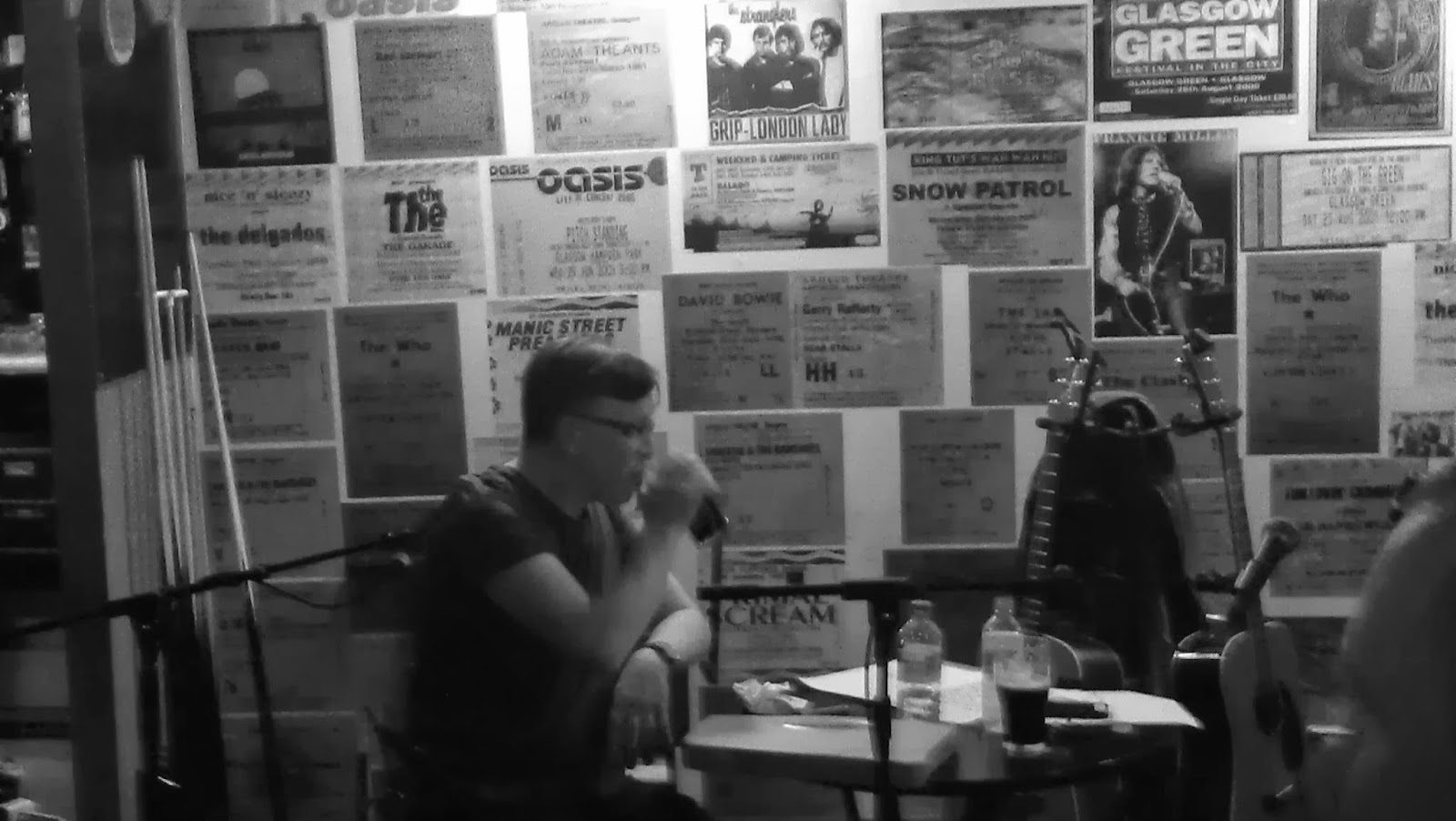 Norman ponders what gems to select from over a Guinness

Songs from The New Mendicants album opened the show; Sarasota and Cruel Annette. The duo joked about not seeing each other in a while (Norman has been in and around Glasgow working on the new Fanclub album) and remembering the songs, keys and chords.

They gelled effortlessly and good humour was evident throughout the show. Joe joked about Norman emailing him to say he got their tour expenses down to £178 - Norman mentioned that this was because they were staying at his parents after every show - including those in Inverness and Aberdeen, adding 'don't worry Joe, Bellshill is a 45 minute drive from everywhere.'

Follow You Down was sung beautifully, the cover of Sandy Denny's By The Time It Gets Dark was spine tinglingly good. 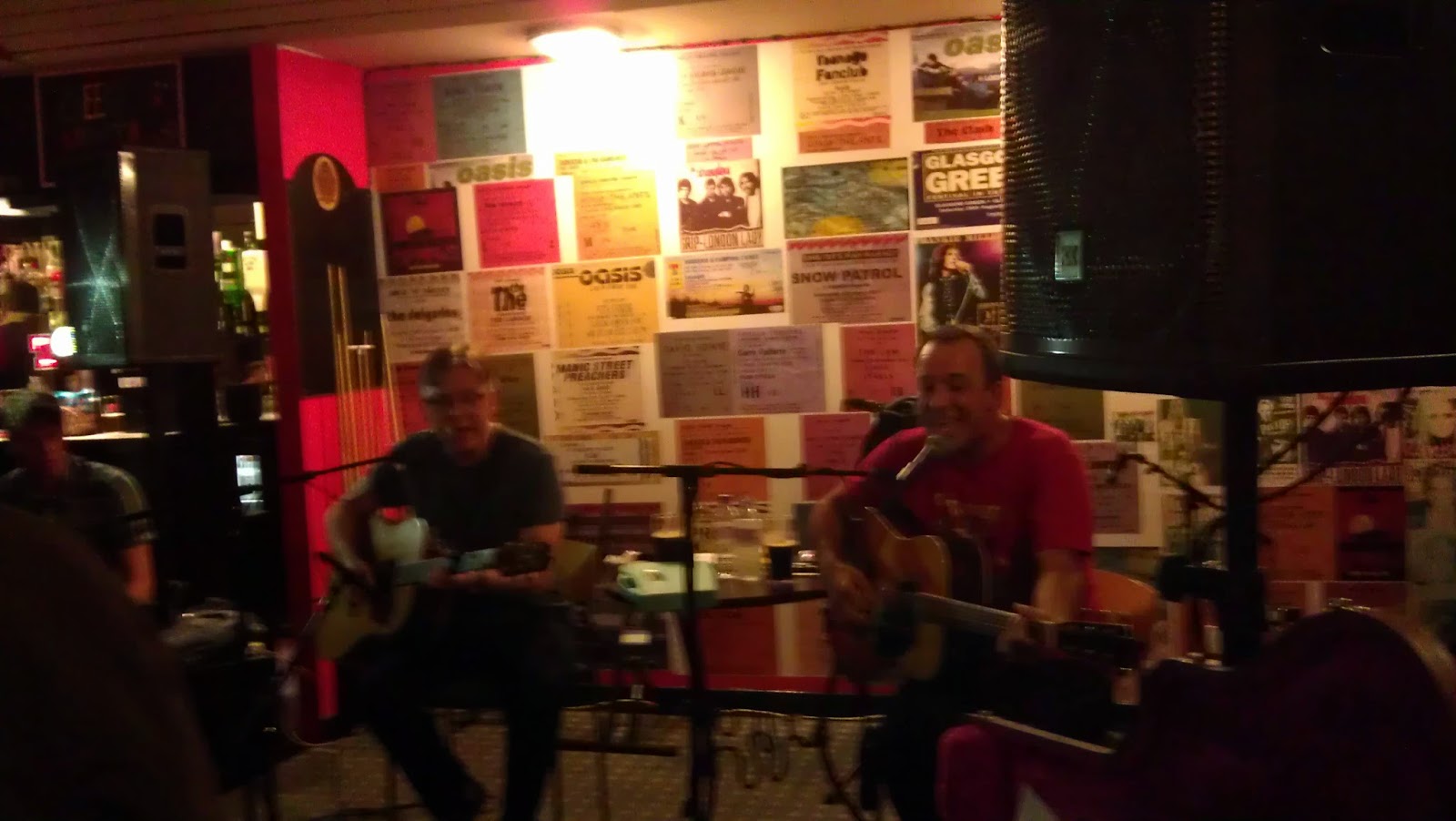 It was then time for what I can only describe as a friendly game of top trumps, with Norman and Joe taking it in turns to play a song they had written.

Norman dug into his back catalogue and brought out You Was Me (from the Jonny album) Dark and Lonely, I Don't Want Control Of You, Baby Lee, a really brilliant Everything Flows at the request of Joe. Did I Say is one of the best songs Norman has written - and that is saying something. Hearing it stripped back to the bones is a joy.


Hey, did I day, I don't mind if you want to go back
To the lake where you learned how to swim with the sun
Beating down on your back in the morning of dawn
For you girl, are you waiting for me? 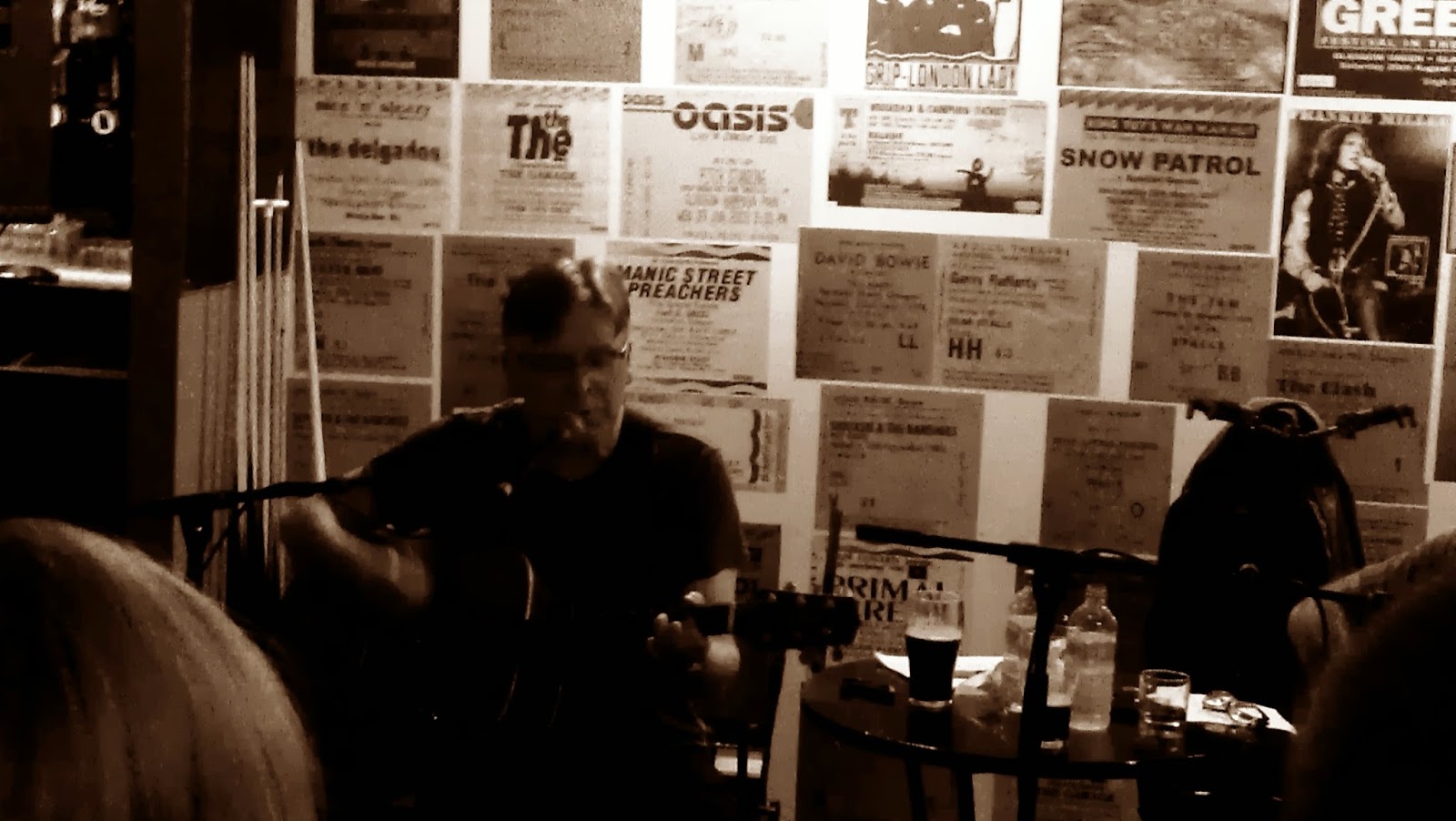 I'm sure that the two could have played for another hour or two with ease. It was fantastic to watch two genuinely brilliant songwriters displaying their craft in such a unique environment.

As it was time got the better of us and it was time to head for the train - which was delayed, then cancelled and Scot Rail got me a taxi home. Maybe I should just have driven after all!