Teenage Fanclub at the Kelvingrove Bandstand

Norman Blake @normanblake · Aug 16
Thanks to everyone who came to our show tonight. We really enjoyed playing for you. Will live long in the memory. Good old Glasgow
:-)


On Friday night Teenage Fanclub played the Kelvingrove Bandstand in the West End of Glasgow, coming back from 4-years away and reminding us all what a truly special band they are with a set spanning their entire career to date, culminating with a glorious extended version of debut single Everything Flows.

The show sold out in 25-minutes, sparking a scramble for tickets amongst some of the bands most diehard fans. Thankfully most seemed to get their hands on some for the night. I certainly bumped into a lot of people I have met via the bands Forum over the years.

The weather was dry, there was even a bit of sunshine as my friend Lorna and I walked through Kelvingrove Park to the strains of the band sound checking When I Still Have Thee around 5pm. We felt like teenagers as we attempted to peer through the fence to catch the band in action!

We headed to meet with friends and family at the Big Slope - very handy for Bandstand gigs - and enjoyed some food and a few beers discussing what songs we thought/wanted the band would/to play.

Support on the night was provided by long term Fanclub friend Joe McAlinden under the name Linden. Chiming guitars and well crafted melodies were the order of the day with Brown Bird Singing sounding superb. The closing version of his old bands Superstar was excellent, an unexpected bonus. 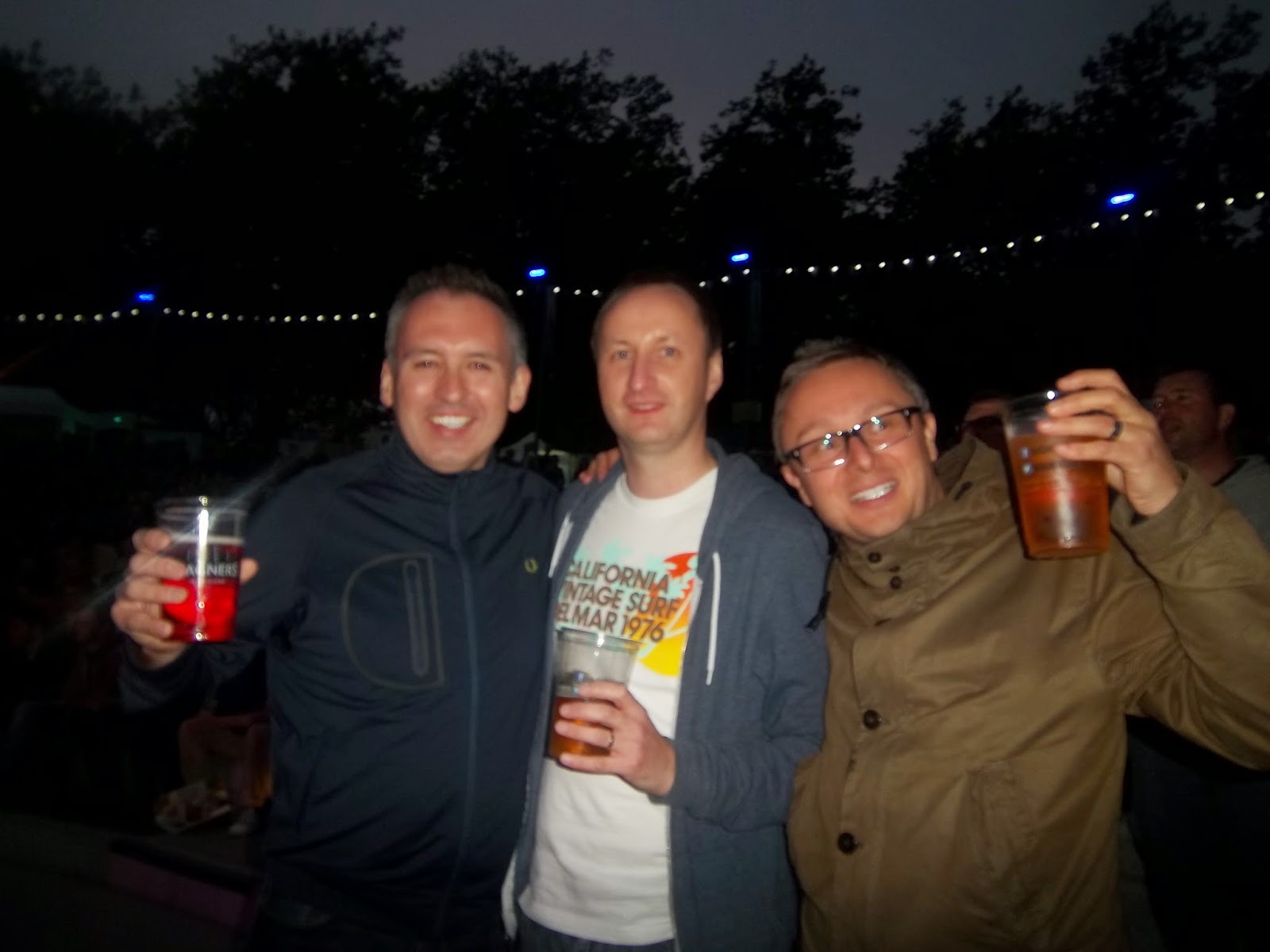 Linden left the stage and a DJ came on and to our surprise my sisters band TeenCanteen's new single You're Still Mine was played alongside an excellent selection of songs containing Felt, Sugar, Orange Juice and The La's. It was a lovely moment.

'This is exactly what the bandstand is for, moments like this' (or words to that effect) came over the sound system and and strolled Teenage Fanclub; Norman, Gerry, Raymond and Francis, joined not only by Dave McGowan but also by Finlay MacDonald.

Teenage Fanclub strolled on to the stage to a huge roar and the 6-piece (for much of the night) got straight into action with It's All In My Mind. 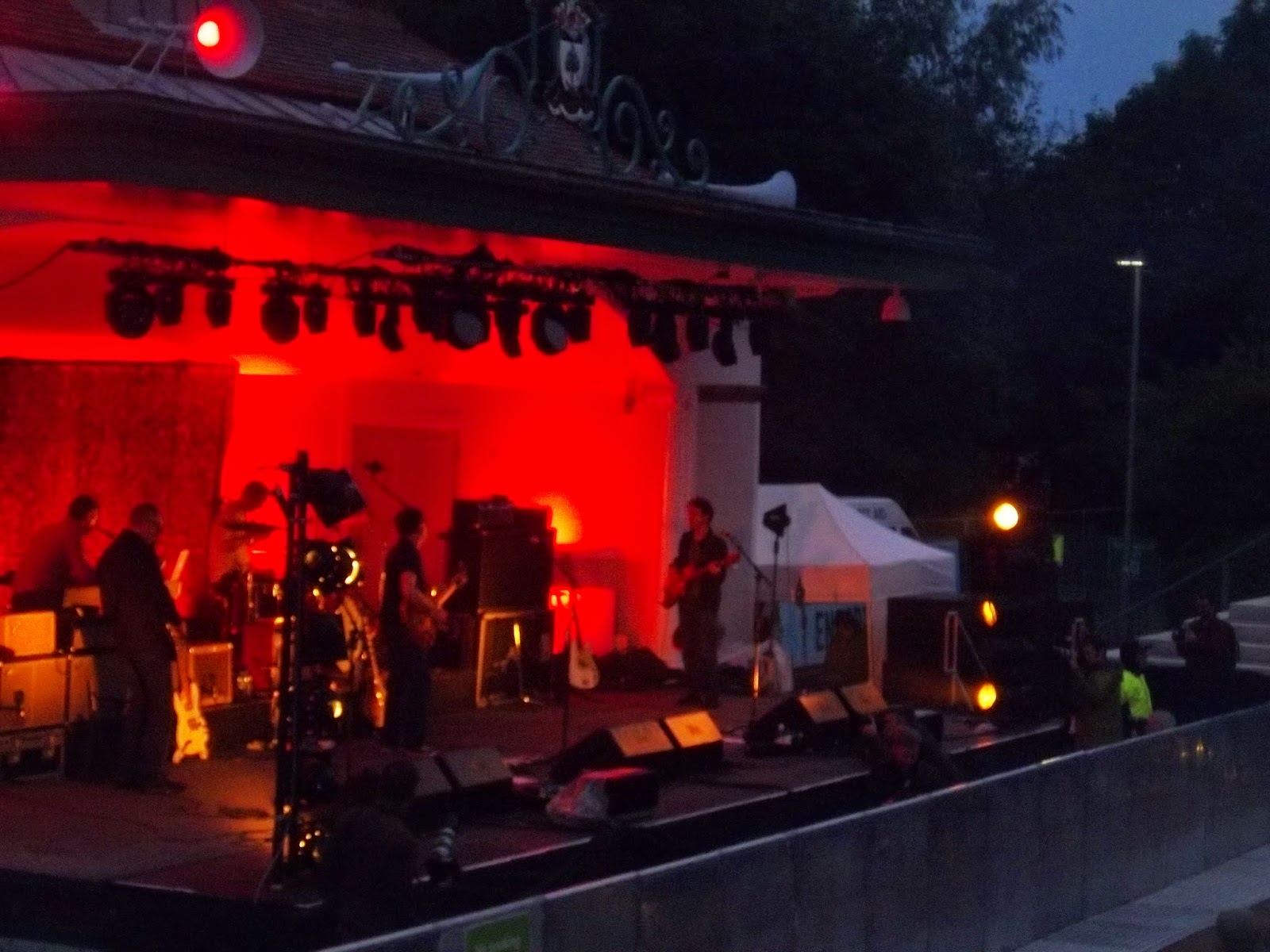 We were at Raymond's side of the stage and the sound was a little muffled to start, but we moved down to stand at the side of the wooden benches near the front and it sounded much better.

The band were enjoying themselves and the Bandstand was absolutely packed out,  it seemed much fuller than Belle and Sebastian and thankfully the venue had learned from the crazy bar queues at that show and put on a second bar.

The warm chords of About You lifted the crowd further and we sang-a-long heartily. I am a little hoarse this morning!

Sometimes I Don't Need To Believe In Anything was classic Gerry Love who looked super cool playing bass to Norman's left. The band romped through Baby Lee - two brilliant songs from their last album Shadows. 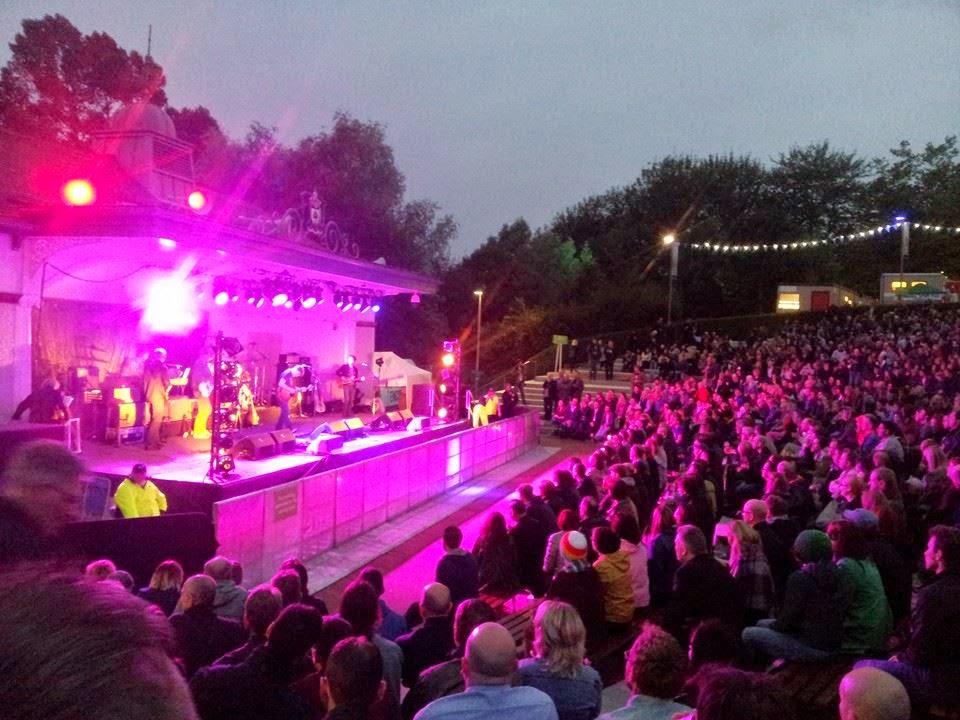 Don't Look Back generated a great reaction from the crowd, a real classic with the band gelling superbly, swiftly followed by Start Again and My Uptight Life. Love, Blake and McGinley - all getting a chance to display their craft to an appreciative audience.

Norman joked about the bands rider of Haribo and Dave duly departed one stage door and came back out the other side to throw packets into the crowd!

The band were on fire and the audience responded during I Need Direction. A guy and girl went down the front to dance in front of the band and the audience responded en masse. Before you knew it there must have been a couple of hundred people jumping about and singing down the front. The look on Norman's face was priceless. I was too busy enjoying myself to get my phone out for a picture. It was a special moment; band, song, audience and venue combining.

What followed was even better; a glorious run of songs with people greeting them like long lost friends that they wanted to embrace and show just how much they loved them and missed them. 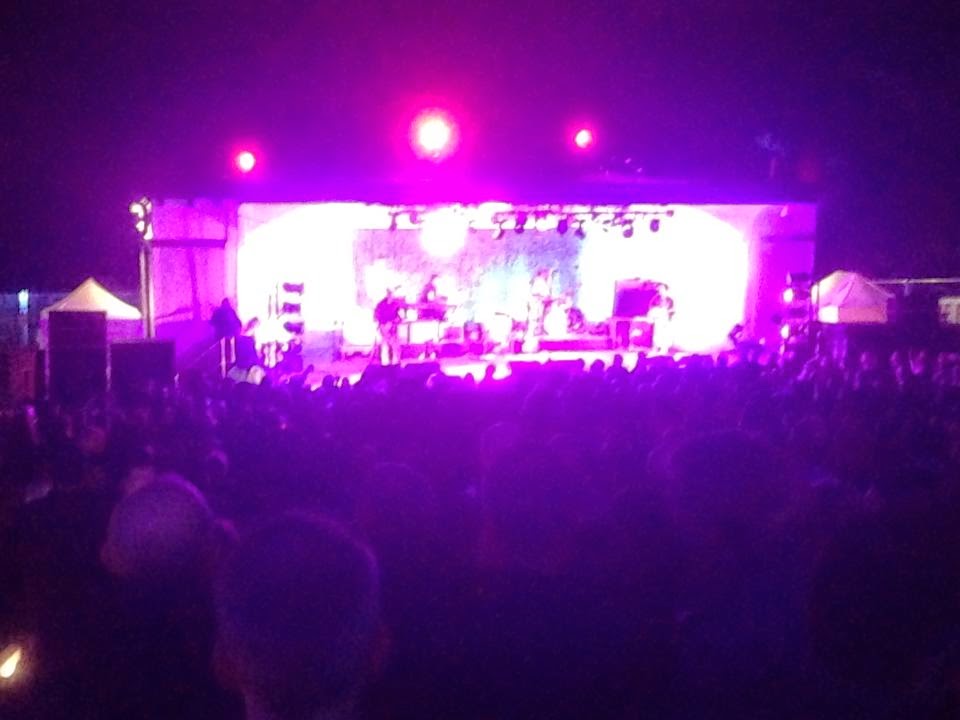 Did I Say is Norman Blake and Teenage Fanclub at their very best; a flowing, melodic and poetic love song;


Hey, did I say, that I smiled when I first heard your name
Fell in love, and I still feel the same way...

Can't Feel My Soul is one of Raymond's best. His guitar playing was exceptional through the night; none more so than during the closing section of this song.

Sparky's Dream is guitar pop perfection. There was a mass outbreak of pogo-ing down the front, people hugging each other, singing and jumping in time with the music. Some hardy souls relived their youth with some crowd surfing. It was great fun.

The 6-piece band with 3 guitars sounded superb, especially on Fanclub favourite The Concept. The crowd sang with gusto.


I didn't want to hurt you, oh yeah

The 3-song encore was perfect. McGinley's masterpiece Your Love Is The Place Where I Come From, Love's fans favourite Please Stay and then an absolutely epic extended version of Everything Flows with 4  guitars sounding like heaven on earth. 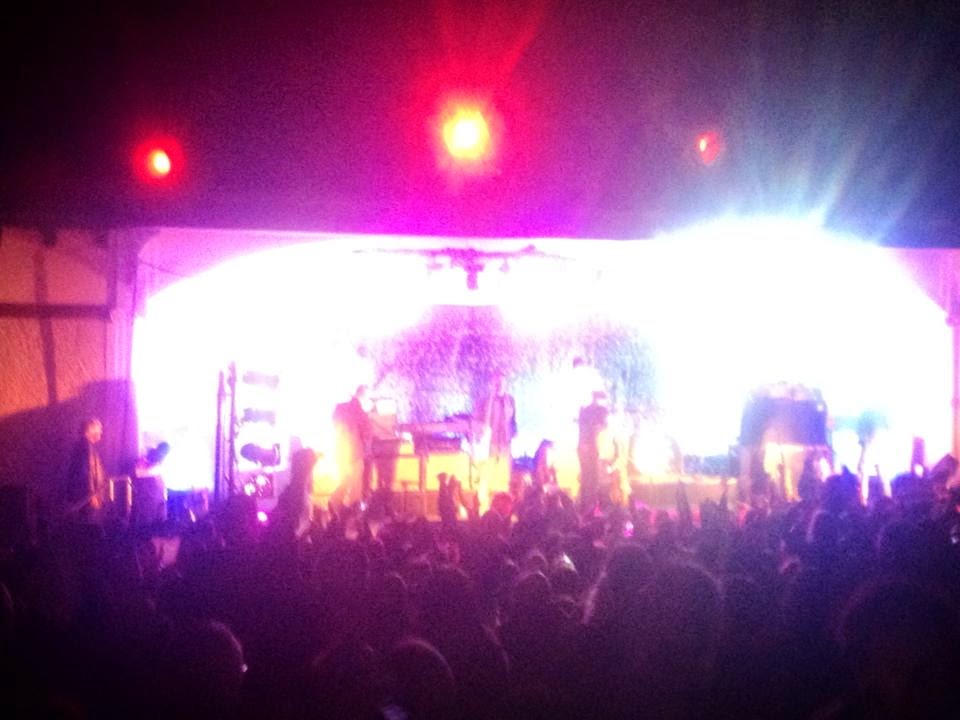 The band jammed on and the crowd sang the chorus as grown men punched the air, pogo'd and crowd surfed. Everyone - band and crowd - had smiles as wide as the Clyde on their faces.

As Norman's tweet states - this will love long in the memory. 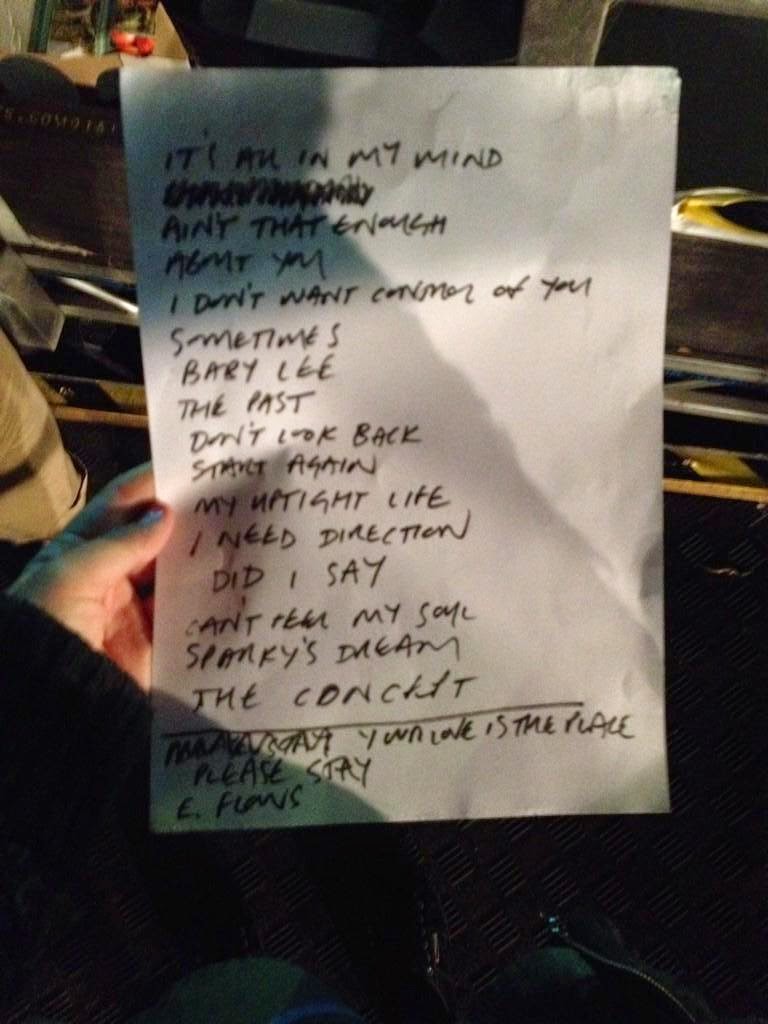