Indulging in his more 'experimental' side, Noel also announced that a second album, which is a continuation of his collaboration with Amorphous Androgynous, will be released in 2012. The tracklisting for the debut album is;

Several of the tracks have been widely available on YouTube for quite some time, so lets check them out;


Everybody's On The Run may well have been written on the last Oasis tour judging by the recordings from soundchecks. Noel's soothing vocals ache with feeling.


If I Had A Gun - this sounds like it was recorded in the very early stages of the songs creation, gentle lulling chords and vocals with Noel humming some of the melody and allowing it to fall away. I imagine it will sound a lot more epic when recorded.


I Wanna Live In A Dream In My Record Machine was recorded for the last Oasis album Dig Out Your Soul, either failing to make the cut, or mor likely being kept back by Noel who probably realised that the band had no future. This is my personal favourite from the tracks doing the rounds. The middle eight section is classic Noel.

Stop the Clocks - Noel was/is so fond of this song that an Oasis compilation released in 2006 had this as the title. However it was never released under the guise of his former band. Noel's voice sounds wistful and longing;


Lock the box and leave it all behind
On the backseat of my mind
And when the night is over
Where will I rise?

As someone who first saw Oasis supporting the Boo Radleys at Glasgow Sound City in 1994, I've followed the band on their rollercoaster ride; the highs of 94-96, the considerable let down that was 'Standing On The Shoulder Of Giants, I've been to gigs where Liam walked off, the band walked off, I was at their T in the Park gig in the tent in 1994 when they played football on stage, in the front pit at Knebworth.....


I still take an interest in what Liam and Noel do as I know what they are capable of musically and I personally love their sense of humour and interviews. I am fully aware that they are not everyone's cup of tea, indeed I was pretty down on them myself for a while. However they have a charisma that lifts them above so many other acts out there. I for one am really looking forward to hearing what Noel has to offer.


I think that big brother might just remind Liam where the real songwriting talent in the Gallagher lies. The singing isn't bad either!


Read my review of the Beady Eye album HERE 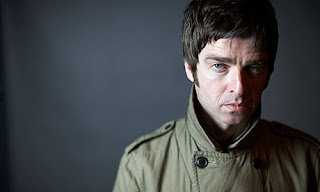