So Futuristic Retro Champions are splitting up after just over four years of fun, friendship, dancing, singing and fantastic nights out.
It has been an absolute pleasure to work with this band as a brother, friend, manager and fan. As someone who loves music, but has never really progressed beyond 3 chords, I was excited when my sister Carla told me she was forming a band with friends from Edinburgh School of Art. The original 6-piece line-up of Sita (vocals), Carla (keys), Harry (guitar), Luke (bass), Adam (synths and shouting) and Dan Dan the trumpet man, played their first gig at the Wee Red Bar towards the end of 2006 and within a few months and few gigs later The List named them as a band to look out for. 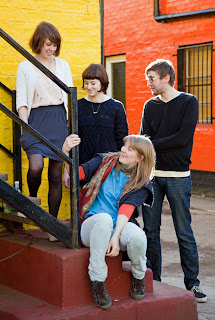 With no money and no driving license between them, they recorded songs on a laptop in flats around the city and their rough demos led to support slots with Friendly Fires, Glasvegas and a young Bombay Bicycle Club. Word of mouth spread to Glasgow and they came over to play at club nights at the ABC and the old Barfly as part of the Dolly Mixture nights and they also made the trip to London a few times. Once to support Manda Rin of BiS. 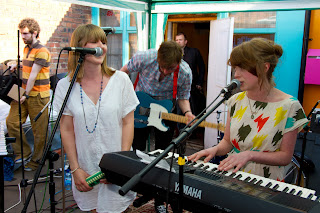 I have fond memories of the band being asked to support Kate Nash just as she was breaking at a tiny bar called Henry’s in Edinburgh. FRC’s has quite a strong following and their fans took over the venue that had been set up for an ‘intimate performance’, kicking the chairs to the side of the room and dancing along to live favourite ‘Jenna’ with the band awarding a bottle of wine to the best dancer.
Upon finishing their degrees Luke and Adam left the band and their friend Ceal joined on bass. I still think of Ceal as Elastica-cool. 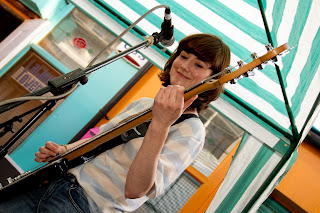 The Band were heavily encouraged by their art tutor Paul Carter and when he sadly passed away they helped to put on a tribute night in his memory and asked Eugene Kelly from one of Paul’s favourite bands to join them for covers of ‘Son of a Gun’ and ‘Molly’s Lips’. That the band formed shortly after Carla’s 21st birthday was possibly partly down to Mr Kelly who played at Carla’s party, organised by Harry. The Vaselines sense of fun, DIY punk/pop and not ‘selling out’ was certainly something that appealed to all of them.
The band played the biggest show of their career to 2,000 people in March 2009 when Eugene personally invited them to support the reformed Vaselines in London. The band were amazed when kids in Nirvana t-shirts came up to buy their electro pop, but then good music is good music. 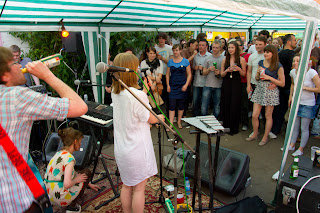 Later that year Carla and Harry moved to Glasgow after Carla was accepted to do a Masters in Fine Art and it was then that the band really kicked on. Armed with a collection of brilliant pop songs I encourage them to start releasing them, so in February 2010 they released the FRC EP with ‘You Make My Heart’, ‘Lets Make Out’, ‘DIY Lovesong’ and ‘Told Ya’. There was airplay on 6 music and Radio 1 and another trip to London. The release party at 13th Note saw people watching from the corridor as they couldn’t pack anyone else in. They ended with an inspired cover of Bananarama’s ‘Robert De Niro’s Waiting’ that brought the house down.
With some money in their pockets for a change the band then went into La Chunky Studios in the West End of Glasgow to record their next EP with the lovely Ronan as producer. Pleased with the results they decided to stick it out immediately for free. Entitled La Chunky EP with live fave ‘Jenna’, the summer-tastic ‘Strawberries and Vodka Shots’, ‘Kitten With A Loaded Gun’ and a remix of ‘Told Ya’ the EP brought more great reviews for the band. The band played two of their favourite gigs at Bar Brel and the Hidden Lane Festival (pics from there are displayed). 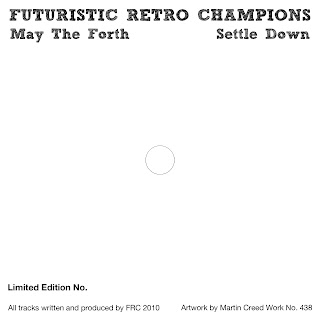 On her 25th birthday Carla went out dancing with her young teenage friend Fraser Bone – quite a character. The night out and the resulting hangover caused her to right a new song. With no title it became ‘May the Fourth’ after the date it was written, then changed to ‘May the Forth’. She also wrote the 80’s synth ballad ‘Settle Down’. With confidence at an all time high the band were asked by their friend and fan Martin Creed if his band could play with them if they had any gigs in August when he was up for the Edinburgh Festival. They cheekily asked if he could do the artwork for their new single and he said yes. 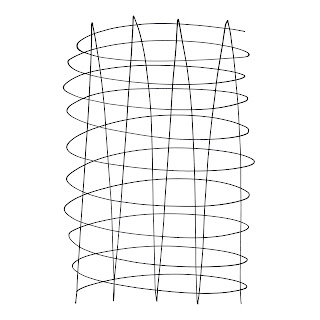 So with a Turner Prize winner on board as an artist they booked Mono to launch their single, printing 100 copies on black vinyl-esque cd, coming in a 7-inch style package. The Mono gig was a blast with support from the Hidden Masters, Eugene Kelly, Martin and his band, before the night ended with crazy dancing to the beats of samba band Kings of Macumba. 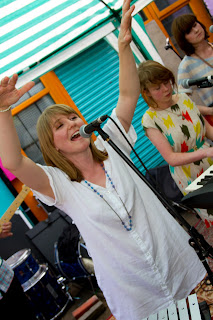 Fake PR took the band on and the single got great reviews and ended up being played by Radio 1 DJ Kissy Sell Out who remixed it twice live on air. He liked it so much that he invited the band to play live with him in Birmingham.
So with things going so well after 3 releases, great reviews and radio 1 airplay, not to mention a couple of small labels sniffing around....the band chose to split.
Unfortunately Carla and Harry split up after 5-years together. A real shame on a personal and band management/fan point of view but things happen. Carla is in the final year of her masters and Harry is now back in Edinburgh concentrating on a PHD.
Carla, Sita and Ceal are likely to form a new band with Sita’s brother on drums and Carla’s long term friend and fellow art student Ross Dixon on guitar. With an ever increasing bank of equipment and production skills, Harry is working on production and remixes and I wouldn’t be surpised if he writes his own stuff too. Carla has also been asked if 2 or 3 of her songs can be featured in a film.
Futuristic Retro Champions will be heading out in style with 2 Christmas/farewell party shows in December.
Dec 10th – Sneaky Petes, Edinburgh
Dec 11th – Captain’s Rest, Glasgow
Harry is mixing all their songs to release an album for these dates. A ‘futuristic retro=spective’ if you like.
Be there for the gigs, they will be emotional and they will be pop-tastic. I put a question mark at the end of the blog title as I hope their music will live on....
Futuristic Retro Champions will always bring a smile to my face, only for now, there is a tinge of sadness. If there is another band out there who play with such a sense of fun, have harmonies, choruses and melodies and a pure pop philosophy, I'd like to hear and see them.
Posted by everythingflows at 02:45