Pre-lockdown, I really enjoyed heading through to Strathaven Hotel for an intimate performance by Norman Blake and Euros Childs. Jeez, almost 2-years ago!

The gig was one of the first to be put on by Douglas MacIntyre of FRETS Creative, also of the band Port Sulphur and Creeping Bent record label. A man with many strings to his bow.

You can read or hear about all of them in an interview and podcast that Douglas has previously helped me out with.

Strathaven is a lovely little town and the hotel is stunning. I can highly recommend their pints of Moretti - beautifully chilled and refreshing! I couldn't wait to get back over for another show. Rightly or wrongly, I hadn't quite felt confident enough to go to The Bluebells back at the start of September, but now the plaster is well and truly ripped off and I am thoroughly enjoying being back at gigs.

Friday night was my 6th in 2-months. Not bad going for someone in their mid-40's with 2 kids. I'd be quite happy to continue the 3 per month ratio! 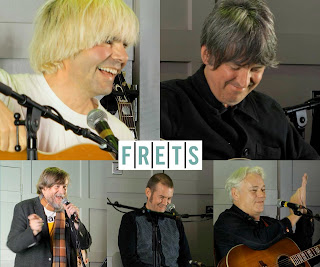 I was particularly looking forward to Tim Burgess, Norman Blake and Duglas T Stewart playing together. 3 singer-songwriters and band leaders that I have followed and admired for 30-years.

Sadly, as a stark reminder that the pandemic isn't over, Norman had to pull out of the show after testing positive. Duglas kindly updated us to say that Norman is doing well and on the mend.

The FRETS shows do start early and unfortunately we missed the first BMX Bandits song - Duglas with his friends David Scott and Stuart Kidd. But we were in luck, there were a few seats in the 2nd row, so we settled in for the rest of a lovely soulful set.

Duglas was his warm, charming and passionate self. Dedicating the song Jean by Rod McKuan to his late Mum, telling us of how his Dad used to sing it across the kitchen table to the love of his life.

Duglas spoke about how much this song means to him in a podcast we recorded way back in 2016 that you can check here Other highlights included A Missing Front Tooth from the recently released My Chain album was a melodic delight, Foggy from the Bee Stings album was beautiful and a pleasant surprise.

After a short interval, David Scott was back on with Stuart Kidd to perform as The Pearlfishers. I have to confess to not being incredibly knowledgeable about their back catalogue. Highlights were a couple of songs from their 2007 album Up With The Larks. Guitars and voices entwined, beautiful harmonies and melodies.

Just after 9pm Tim Burgess walked from a side door and up on to the stage. Wearing a long overcoat, plain white t-shirt, faded jeans and classic Reeboks, Tim picked up his guitar and took a seat to a huge ovation.

Highlighting that this was his first ever solo acoustic show, Tim did seem as nervous as he said he was, however he still had the confidence to begin with a brand new song called Here Comes The Weekend. Beautifully melodic, telling the tale of a romance across the seas involving calls and messages, it sounded super cool. 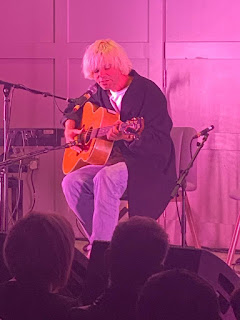 Watching Tim playing acoustic up close was a real treat. His songs were stripped right back, highlighting how strong his vocal melodies and song structures are. The Charlatans Trouble Understanding got an early outing alongside solo material from 2020 releases. A handful of songs from I Love The New Sky and the beautiful Yours To Be from the Ascent of the Ascended EP. The latter has become a real favourite of mine and I really appreciated seeing and hearing Tim playing it in this way.

I thought I liked you, but I love you

That's how things can go

I may seem distant, but I heard you

Playing on the radio

Tim then shouted for his friend and band mate Mark Collins to come on stage to a large cheer. Mark looking super cool in desert boots, jeans, mod jacket and haircut.

After playing Different Days and Emilie, Stuart Kidd came back on stage for the 3rd time to add harmonies and percussion on a trio of Charlatans classics. Hearing The Only One I Know stripped back to the bones was remarkable, the way Mark and Stuart played/jammed it was brilliant. The crowd sang along heartily. Then .... we had Then. Another song I didn't anticipate hearing in acoustic form. And it worked. 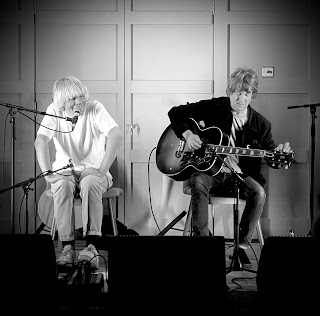 North Country Boy was a delight, the melody changed to suit. Tim didn't play Doors of Then or White when I saw him recently at King Tuts, so it was fantastic to hear them.

The laid back friendly nature of FRETS and the evening was highlighted and underlined when Duglas and Davie came back on to the stage to play BMX Bandits seminal Serious Drugs. Duglas and Tim traded verses and I think everyone's heart felt warmer afterwards.

Tim then sent his love to Norman and said that the best way to do it would be to play a song called Norman .... Norman 3. After a false start, the makeshift band played it superbly, another real heartwarmer with everyone in the room singing the Yeah, I'm in love with you refrain.

Just to turn the feel good atmosphere up a further notch, Tim invited a young boy in the front row up to play keyboards and we were treated to a 1-minute performance of the theme from Halloween. (I think!) It was a lovely moment, as was Tim singing to Douglas' daughter. From our position across the aisle we could see just what it meant to her. 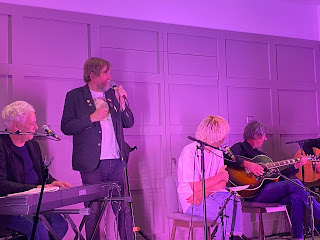 There was more to come. Impossible brought a half dozen people waltzing down the aisle, singing a-long and punching the air, causing smiles in the crowd and onstage. Here Comes A Soul Saver and Just When You're Thinking Things Over caused a few more people to get up and dance at the end.

Afterwards it was so good to speak to friends I haven't seen for a while. Everyone was basking in the warmth generated by the show.

It's so good to see Tim so busy and buzzing with his solo album and with The Charlatans recent A Head Full Of Ideas boxset/best of. He has the best of both worlds - small, laid back and intimate shows in King Tuts and the Strathaven Hotel and then back in Glasgow in December at the Academy. 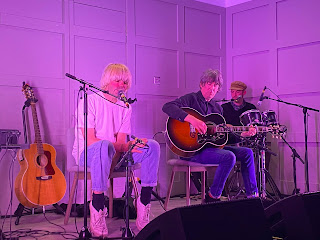 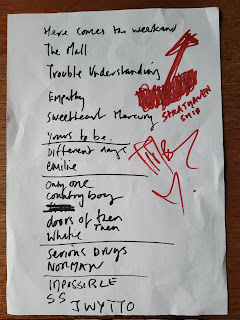