The Jesus and Mary Chain play Darklands at Barrowland 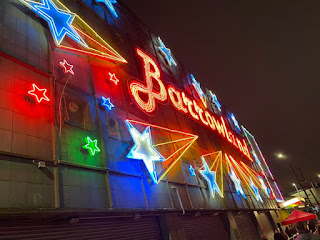 I always have an extra spring in my step in the days leading up to a gig at the famous Glasgow Barrowland Ballroom. It's such a good feeling to have something exciting to look forward to. I guess I was particularly looking forward to The Jesus and Mary Chain playing, as (a) they don't play that often, and (b) they were playing Darklands, their 1987 album, my favourite from their back catalogue.

My friend Joe and I arrived for 7.40pm, in plenty of time to check in with our vaccine passports and head up to the hallowed ballroom to grab a couple of beers. I'd been checking out support band Spyres since the summer. A young band led by Kiera McGuire and Emily Downie, both still in their teens. Spyres have released 3 singles to date, packed with power, riffs, hooks and melodies. Think Hole meets Fleetwood Mac, with maybe a dash of Biffy and Foo Fighters thrown in for good measure. 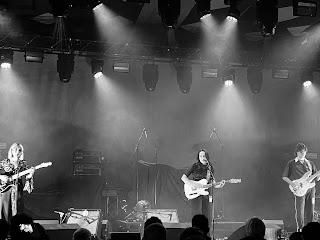 Spyres won a busy room over with their energetic set. They really rocked out at times, while one of the new songs they played showcased how they are developing as young writers and performers. McGuire and Downie on guitars and vocals traded verses, harmonised beautifully and their duelling guitars created a glorious racket, while the rhythm section Jude Curran (bass) and Alex White (drums) underpinned everything. Their forthcoming single sounds like it will build on the solid platform provided by Otherside, Fake ID and the glorious I Don't Care.

Look out for a forthcoming feature on the band who headline Stereo on Thursday 2nd December. 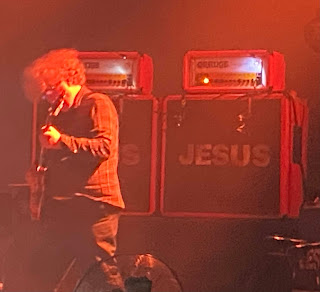 On to The Mary Chain who arrived onstage at 9.15pm to a huge ovation. Jim Reid immediately unwrapped his mic from the stand, told us they would 'play Darklands, go off for a cup of tea, cause we drink tea these days believe it or not, then come back on and play b-sides, a-sides and other stuff.'

Jim's brother William set up in front of his amps and didn't stray too far from there for the whole performance. Totally lost in the sounds he created. Backed by acoustic, bass and drums, the five piece performed Darklands beautifully, plenty of space, the rhythm was there, but William's raw and loving guitar riffs were always leading the way.

Darklands was beautiful, Happy When It Rains was utterly euphoric, the band hitting their stride immediately. Jim was at the front of the stage, silhouetted by the lights which were magnificent throughout the show. All red at times, beaming like lasers at others, then full on psychedelic in the later set.

The extended version of April Skies was joyous, a real groove. Cherry Came Too was a chiming guitar delight, On The Wall was menacing and edgy in all the right ways, while About You was beautiful.

There's something warm about the rain

Darklands is such a beautiful album and it was a joy to hear and see it being performed with such love, on stage and off.

Energy levels were heightened for the second set, with the acoustic ditched for a second electric. A warm and scuzzy Come On sounded sublime, I Love Rock n Roll was blitzed and I was thrilled to hear Can't Stop The Rock which is as pop as the Mary Chain go.

We had the contrast of the sonic assault of Kill Surf City and the blissful Drop, while I was personally delighted to hear and see the band romp through Something I Can't Have, one of my favourites. The sng flows effortlessly, the Mary Chain sounding super cool.

Jim was on the lip of the stage, lights ablaze, sometimes turning and walking towards his brother William as if to check in on him. William could be facing the crowd, turned towards his brother, or more often than not he was facing his amps to see what noises he could conjure from them. His hair was beautifully messy, like he'd stuck his finger in and been electrocuted. In fact, I think he electrocuted the crowd!

Ending with the white noise (light and heat) of Never Understand, I walked away from the Barrowland with my ears ringing, my face smiling, my heart glowing from the beautiful noise generated by The Jesus and Mary Chain who were in stunning form. 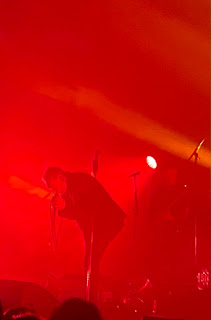