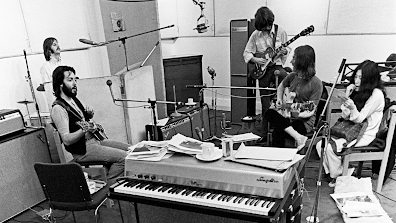 Oh yeah, George has left The Beatles, leaving John, Paul, Ringo and Yoko to kind of break down in the studio, letting out their own frustrations in experimental noise.

On Sunday, The Beatles all head out to see George to try and persuade him to come back. It doesn't go well. They then hear through the grapevine that Harrison is in Liverpool, so that leaves them with a few days of hanging around.

At one stage, early in Part 2, Paul McCartney has tears glistening in his eyes as the remaining Beatles sit around contemplating that this might be the end. It's a very emotional and moving scene. We are also able to listen to Paul and John talking off camera, thanks to a microphone hidden in the Twickenham Studio canteen.

George returns! The band move out of the cavernous Twickenham Studios (which really didn't help in any way at all) and into a kind of DIY Apple studio in Saville Row. It's just a small rehearsal room and Glyn Johns, seemingly single handedly, constructs a control room and studio.

All of a sudden, John Lennon seems like a different person. Acting up for the camera, bantering with McCartney, changing into fresh clothes, finding energy and enthusiasm for the project.

George is back, but he is off camera for large chunks of part 2. Was that part of the deal for him coming back? He's sitting in the corner behind John and Yoko and due to the reduced size of the room, the cameras can't get to him easily.

For a while it's just all Paul and John, laughing with each other, bouncing off each other, in the zone. It's so beautiful to watch. 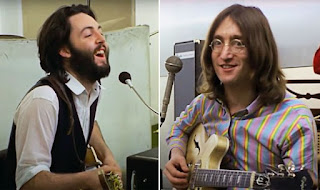 And then Billy Preston comes in and the band are all over him. Smiling, laughing, talking of the Hamburg days. Preston sits in with them, looking super stylish and cool, but also like the cat who got the cream ... or The Beatles!
Preston jams with ease and the mood is lifted again. The decision to banish any thoughts of travelling to record a finale to the film/documentary also helps with the relaxed atmosphere. And McCartney changes the performance date decisively, pushing it back to allow more time to play. McCartney also takes charge and the others let him - saying that they need purpose for and outcomes from every day.
And then George is smiling! The scowls from episode 1 seem like a distant memory / nightmare. All of a sudden George is suggesting they release Get Back as a single - next week. For the first time, the band are a real band - singing from the same sheet (with help from Mal Evans writing down the lyrics) in the rehearsal room and also in the control room. Everyone is on the same page - even Michael Lindsay-Hogg who had previously been trying to badger the band into travelling and scenes ... he is just enjoying the mood, the music and the opportunity to watch the band at work - just like us.
The beauty of the documentary really shines in part 2. The Beatles at work and play - together. Lennon wisecracking, McCartney in the zone, Starr loving it and George is even allowed to make suggestions without being shot down!
I particularly love the footage of the band playing George's For You Blue with Lennon improvising on the slide guitar that has just been brought in. We get to see the take that was used on the original Let It Be album, with Harrison highlighting that he wants something raw, recorded in a maximum of 4 takes. 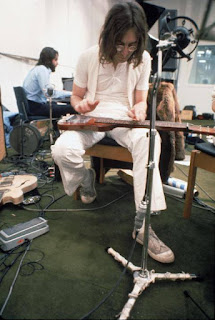 There is also incredible footage of The Beatles 1968 trip to India, beautifully edited to fit in with a conversation that Paul is leading about watching his homemade footage the previous night.
And then conversations change from the band playing on Primrose Hill to playing on the roof of the building they are in. We see the smile on Paul's face as this suggestion is relayed to him and then we see him boosting himself and others on to the roof for a look. This is a brilliant scene, a real pleasure to witness the suggestion and the first look at the rooftop.
I'll go back to watch part 2 of Get Back many times over the months and years ahead. From feeling a little heartbroken watching the tension, frustration, lack of direction and George walking out in part 1 ... to laughs, smiles and the sight of The Beatles playing and having fun - beautiful.