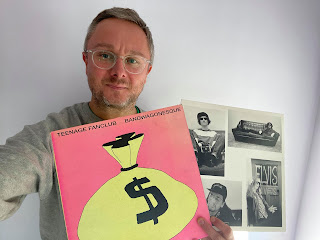 My battered and worn 30-year copy of Bandwagonesque

30-years ago I was a 15-year old developing a healthy obsession for music. Raiding my parents record collection, buying the NME and Melody Maker every week, listening to Peel occasionally, the Evening Session a lot and making trips to Missing Records in Glasgow or Impulse Records in Hamilton.

But arguably my biggest musical education stemmed from conversations and mixtapes at school. I distinctly remember a tape my friend Grant Mitchell made me containing Everything Flows and Don’t Need A Drum by Teenage Fanclub.

Living in the Lanarkshire backwater of Carluke, I was intrigued that this band from Bellshill, a 20-minute car/train ride away, were generating such a buzz. Then all of a sudden there were new singles; the blitz of Star Sign and the impeccable The Concept. Teenage Fanclub were a band happening NOW! I was falling for The Beatles and there is never a bad time to fall for The Beatles, but I was 30-years too late. I'd fallen heavily for the Stone Roses, but I was playing catch up on all their singles and I was 2-years too late, 2-years too young to get into them at their peak.

Bandwagonesque might have been the first album I really looked forward to buying upon release as a teenager, certainly the first from a band so close to home.

This wasn't Manchester, London or Seattle. This was 4 guys from Bellshill, just up the road from me in Carluke. They were playing London, going to America, in the NME, the Melody Maker, recording a Peel Session, they were on MTV and December was even background music for a hot air balloon feature on Blue Peter!

Teenage Fanclub felt like the perfect band, at just the perfect time and Bandwagonesque was the perfect album. They felt real, within touching distance. 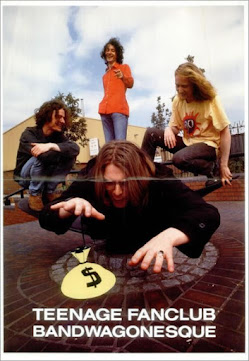 Why was it the right album? For all the reasons it still is.

The humour, or at times just blatant cheek. The star kissing harmonies, the glorious guitar sounds, the brilliant use of swearing in Alcoholiday, the kind of cool but also kind of sh*tty sleeve. 3 different songwriters and singers, a crazy drummer. The innocent lyrics in songs like Sidewinder  ‘saw you there with long blonde hair, eyes of blue, oh baby, I love you’ that fitted in so perfectly for young teenage boys (like me) who fell in love with a different girl every day.

Yeah Teenage Fanclub were special, Bandwagonesque was special. They both still are.

The intro lyrics to opening song The Concept still make me smile and tell you so much about the bands humour;

She wears denim wherever she goes

Says she’s gonna get some records by the Status Quo

I could be jumping around my bedroom singing yeah, yeah, yeah to The Beatles or oh yeah, oh yeah to Teenage Fanclub. The closing extended outro of The Concept gets better with age. The guitars, the harmonies, I'd be happy if it went on forever.

The riff of Satan always makes me reminisce about the band breaking into it live, the chiming guitar of December and Gerry Love singing she don’t even care, but I would die for her love struck a chord as a teenager, now it’s like a symphony, just perfect.

What You Do To Me is 2-minutes of guitar pop perfection. So simple, so sublime, so pure, so perfect for fitting on to either side of a C90 mixtape you were making for your friend, or to now bring a burst of sunshine to a playlist. McGinley’s guitar on I Don’t Know mesmerises, Star Sign shimmers beautifully and bursts into life in a way that still makes me want to pogo and I don't think I'll ever lose that feeling.

Flip to side 2, Metal Baby still makes me smile, Pet Rock and the aforementioned Sidewinder echo of young innocent love and infatuation, while Alcoholiday is another song that ages like a fine wine, the guitars sound more glorious, Blake singing ‘there are things I want to do, but I don’t know if they will be with you’ tugs on heartstrings. And the last 80 odd seconds of guitar - swoon!

Guiding Star is so blissfully dreamy and Is This Music? allows you to get lost in the hypnotic riffs and answer - yeah, yeah it is music. And it’s by Teenage Fanclub, my favourite band in 1991 and my favourite band in 2021. Still creating brilliant albums with guitars, harmonies and full of songs to soundtrack my life. 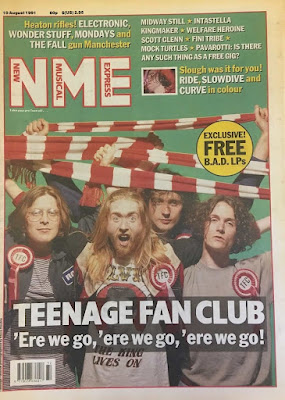