On Monday 22nd May I was supposedly having a day of not checking Facebook. Something (possibly addiction) made me log on. The top story on my news feed had been posted a few minutes earlier by my favourite band - they were playing a Primavera warm up show the following week at the the CCA (Centre for Contemporary Art) in Glasgow, tickets were on sale immediately.

The post only had a few likes and comments at that point, I acted quickly, logging on and buying 3 tickets at £20 each. It was only then (selfish I know) that I shared the information on my own Facebook page, on Twitter and on the Teenage Fanclub Fanclub page.

Things went a little crazy, the CCA website went down, their phonelines were engaged, they were receiving tweets and posts from people desperately trying to get tickets. Thankfully a lot of local Teenage Fanclub Fanclub members I know were successful, but others were not.

On to the show itself. 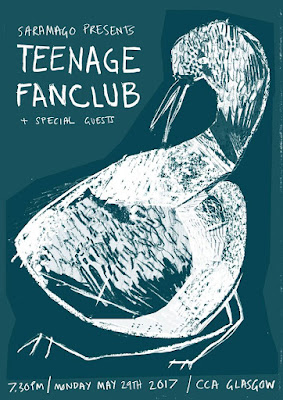 After dinner and some pre show beers my friends and I wandered into the CCA shortly after 8pm to make sure we caught most of the support band Elephant Stone. I wondered if they were Stone Roses fans. That remains unclear, but they are definitely fans of chiming guitars, grooves and psychedelia - they had one song that involved the lead vocalist swapping his guitar for a sitar and sitting cross legged and getting lost in a sensational groove with his band mates. The 4-piece had enough about them to make me want to check them out further and they generated a great response from the crowd - there was no polite applause here, genuine appreciation and curiosity with many craning to find out how they were creating their sounds and grooves.

Elephant Stone were then hot footing it across town to Mono to play their own headline show. They couldn't thank Teenage Fanclub enough for allowing them to support them on home turf and the Fanclub's generosity certainly won them some new fans. Check one of their tunes below;


On to the Fanclub themselves. They hadn't played live for around a couple of months, so this hastily arranged warm-up show had been booked to scrape off any rust ahead of forthcoming festival appearances. Based on the evidence of last night, there was no real need - they were far from rusty, not that anyone was complaining.

The CCA capacity is only 250, so it was a real thrill to see the band in such an intimate venue and an added bonus that we were right down the front to experience it.

There was no need for fancy lights or any kind of intro, this was Teenage Fanclub plugging in and playing - Blake, Love, McGinley, MacDonald and McGowan; 2 guitars, bass, drums and keys. They sounded absolutely sublime. 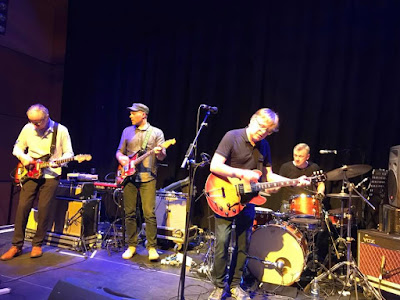 Start Again got things off to a flyer, but it was Gerry's Sometimes I Don't Need To Believe In Anything that was an early highlight - being so close to the stage meant that you could see, hear and feel everything and it was Francis' drumming that caught the ear and the eye, he was in simply sensational form, all over his kit and knocking seven shades of sh** out of it. Gerry was laid back, creating bass grooves and painting a picture of an autumn sunset.

Norman was his usual cheerful self, talking of his need for a haircut, jet lag and how this was the bands 76th show since November last year, prompting one die hard next to me to say 'yeah but what about the 5-year gap?' It was all good natured, but hopefully it won't be so long before the band record and tour again. Norman's voice gets better every time I hear it - angelic.

The setlist was largely the one that had been used for the majority of the aformentioned tour dates; new songs from the Here album sat easily alongside bonafide Fanclub classics. Hold On, Thin Air, Darkest Part Of The Night, a rip roaring I'm In Love and I Was Beautiful were the chosen ones from the latest LP. 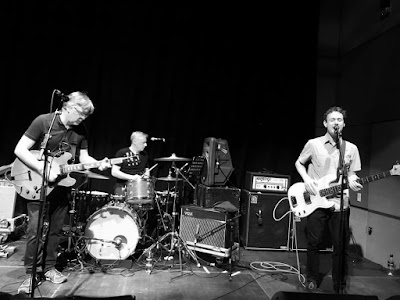 There was one false start, but apart from that this was a cracking Fanclub set in a relaxed and friendly environment; Norman sang like an angel as always, Gerry was laid back cool, Raymond fired off riffs and solos for fun, it was a delight to watch Francis drum up close and Dave McGowan holds and boosts it all whether on keys or guitar.

Don't Look Back received a great reception, one of Gerry's masterpieces; but then messrs Blake, Love and McGinley have so many. From the power pop of About You, to the euphoric chorus of Ain't That Enough, to the blast of pop brilliance that is Sparky's Dream, the Fanclub ticked all the boxes and more last night.

The Concept was particularly glorious, the second section took me somewhere; the guitars chimed and combined and the bands voices sound sublime, it was glorious.

Star Sign and Everything Flows continued in that vein, the guitars sounded rich and true and even in a tightly packed venue there was room for a few of us to pogo down the front.

Teenage Fanclub are a special band, it was great to see them kick up a storm by announcing a show at short notice in such an intimate venue and a genuine pleasure to see and hear them at such close quarters. Their last show is currently scheduled for 21st July - it would be amazing if they could squeeze in another few summer shows. 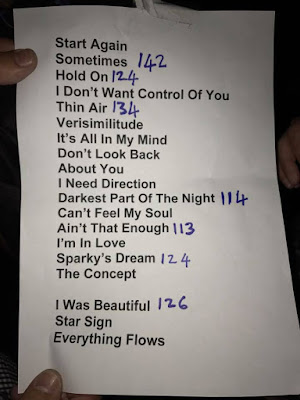