Evan Dando returned to Glasgow last night to his usual warm welcome and the opportunity to play the beautiful converted St Luke's church in the East End of the city, just around from the Barrowland Ballroom. Dando joked that he had played almost everywhere in Glasgow and a reference to the Cathouse brought cheers and laughter.

Indeed he has - from the Glasgow Uni Debating Chambers, to the Garage, the Renfrew Ferry, ABC and Nice n Sleazys, I've been lucky enough to catch Dando playing solo or with his latest incarnation of The Lemonheads on a number of occasions over the years.

Dando captivated the audience from the off by bounding on stage at 8.30pm sharp, throwing his jacket to the floor and picking up an acoustic guitar to launch into Being Around.

The creaky church pews and floors may have had a few choirs on them in their time and Dando had one tonight, with the crowd singing along beautifully to the likes of All My Life, My Drug Buddy Frank Mills, and attempting Juliana Hatfield's backing vocals in Bit Part.

Dando has a rich treasure chest of songs to dig into and he loves to play cover version too. His own material was largely taken from It's A Shame About Ray, Come On Feel The Lemonheads and Car Button Cloth, a stunning trilogy of guitar pop. Ride With Me from Lovey was the oldest Lemonheads song he played. 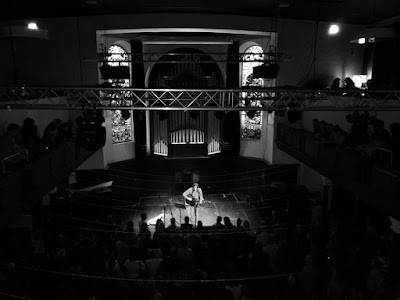 Dando flew from one song to the next, barely pausing to take in the warm applause. His solo album Baby I'm Bored is a bit of a cult classic and it recently received a lavish reissue for Record Store Day - hence the short tour. Hard Drive is just sublime with Dando rhyming off things he is thinking or doing.

Requests were hollered from the crowd with Evan choosing Big Gay Heart and he played and sang beautifully, his voice is still rich and soulful. And the line from Alison's Starting To Happen she's the puzzle piece behind the couch that makes the sky complete is one of my favourite lines of all time.

As always, Dando chose some sublime cover versions; Different Drum by Mike Nesmith, Settled Down Like Rain by The Jayhawks and a spellbinding Round Here by Florida George Line - a song I hadn't heard before, Skulls by The Misfits, They Don't Know About Us by Kirsty MacColl and a couple I am trying to find the name of.

Dando brought on a girl (sorry didn't catch her name) to sing harmonies and play electric guitar for a lovingly shambolic section of the encore. There was no setlist at all throughout the gig and a stand with sheet music and lyrics was used for Dando's benefit. Round Here was particularly gorgeous here.

Into Your Arms brought the show to the end with the crowd singing a long. Dandy captivated the crowd with his performance - even the shambolic sections were gorgeous - he is a brilliant performer, songwriter, guitarist and singer. I hope he returns soon.

The Kirsty MacColl tune is just called "They Don't Know". Yours pedantically, Paul.