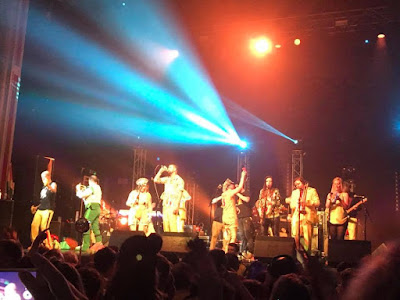 Last night Colonel Mustard and the Dijon 5 turned the O2 Academy in Glasgow into a wonderful sea of smiles, dancing, singing and yellow.

A 13-piece (plus guests!) band won hearts and mind with good time songs like Cross The Road, Dance Off, Ginger Girl, How Many Many's? These Are Not The Drugs You Are Looking For, International Sex Hero and Gay Icon. 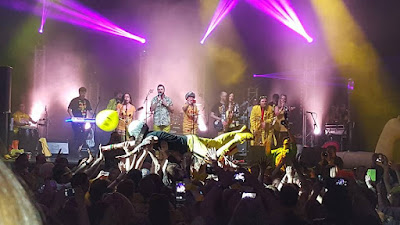 Led by the bundle of energy that is the Colonel (John McAlinden) his band of merry men and girls created an atmosphere that was part rave, part Alice in Wonderland and 100% joyful and uplifting.

There was still time for politics - something that the band bring into their songs and videos; be that Freedom For The Children, Junkie Breakfast or a song that slammed the Tory Government and rhymed Tory with Jackanory. The Colonel and his Lieutenant David Blair (the Djancer) left no-one in any doubt that they should use their forthcoming vote to remove the Tories. The crowd went wild applauded.

The Dijon 5 are a wonderful band, 2 energetic female vocalists back up the Colonel, there are drums, keys/synths, guitars, bass, percussion and a fantastic horn section that can just lift the songs. Somehow, it all comes together in a quite glorious manner. 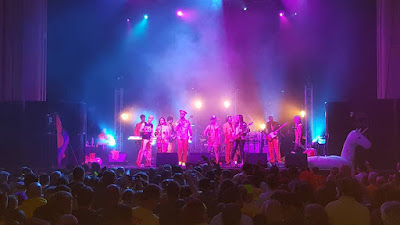 There were no boundaries between the band and their fans - evident from the off when we arrived in time to see opening band Esperanza get the party started with their infectious upbeat ska. The Colonel and his band were in the crowd watching and greeting family, friends and fans. Everyone was made to feel welcome and this created a brilliant friendly atmosphere.

Dead Man Fall were second support and they blew me away and I kicked myself for not seeing them before. I'll definitely be going to see them again when they next play in Glasgow. Their singer played a couple of drums with a maraca and a tambourine to add a real Doves-y feel to come songs and a horn section created some beautiful vibes. Closer Bang Your Drum was sublime.

And then it was on to the main event - bounding on stage to Crosstown Traffic, Colonel Mustard and the Dijon 5 were in the mood to party......and they did!

Last night was a wild celebration of the band and their yellow movement with loads of dancing onstage and in the crowd. As the gig peaked more and more guests joined the band on stage to create a real old school rave atmosphere. Band and audience were as one. The band are all about fun but they are seriously talented and created a real melting pot of sounds that created huge grins as wide as the Clyde across the venue.

Colonel Mustard and the Dijon 5 tap into your endorphins, mix them around for a bit and then make them explode. The Colonel led the crowd 'across the road' on a segway, got us to dance through a mixture of moves like - drive your car, disco disco disco, first pump, speed bump..... and the Dancer got down into the crowd to lead a dance off and then crowd surfed on an inflatable unicorn! 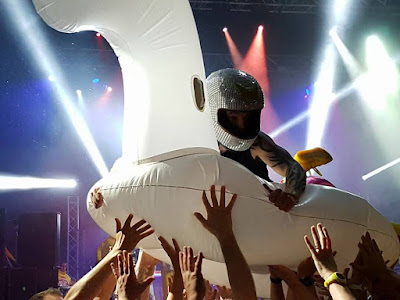 Their Peace, Love and Mustard anthem was euphoric, as was an incredible These Are Not The Drugs You Are Looking For.  The band are playing loads of festivals across the summer - go and see them if you can, or ensure you grab a ticket for their next Glasgow show. 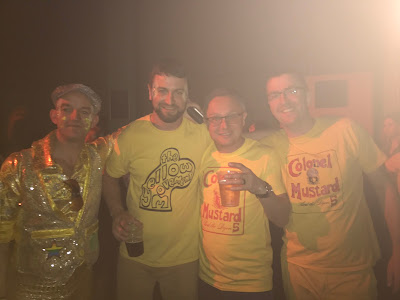 I Agree with every word written. I go to see these 3 bands reguarly and all 3 bands have their own unique entertaining style. Always guaranteed a brilliant night. If you haven't been to see any of them yet...you don't know what you're missing!!