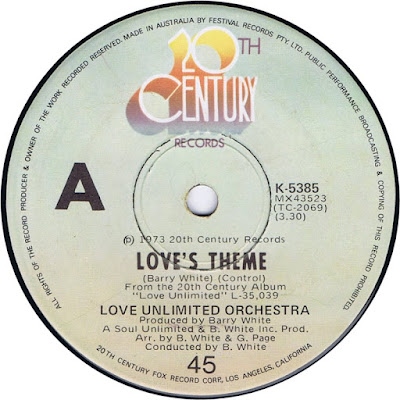 I've had a great month of discovering all kinds of music/artists that I previously hadn't heard, as well as rediscovering some old faves. So this is the largest monthly addition to the Never Ending Playlist yet!

Look Up In The Sky (Negro Nature) - Francis The Great
I heard this on the Lauren Laverne show last year - what a tune!


I Feel Like I've Been Living (On The Dark Side Of The Moon) - Gene Page
I was looking for another song by Gene Page (All Our Dreams Are Coming True - the song my wife walked down the aisle to, it's not on Spotify) when I discovered this. It was the title that attracted me.


Love's Theme (instrumental)/Under The Influence of Love (vocal) - Love Unlimited
Sensationally uplifting and gorgeous string led instrumental changes into something completely different but just as good. Enjoy this one.


Found A Cure (Tom Moulton mix) - Ashford and Simpson
I discovered this while browsing for Greg Wilson mixes or re-edits on Spotify. Brilliant!


Summer Came My Way - Greg Wilson edit
I first heard this a few years ago when Greg Wilson played Melting Pot at The Admiral. Just sublime and uplifting.


Jumpin' Jack Flash - Ananda Shankar
First heard on an old David Holmes mix, this guy sure knows how to dig out a gem


You're So Vain - Carly Simon
So who is/was this song about? Warren Beatty? Mick Jagger? I read an article recently where Carly Simon confirmed that Jagger sings backing vocals. Listen on headphones and it is all too clear. He was certainly vain! A gem of a song.


Tired Of Being Alone - Al Green
There have already been a few times on the Never Ending Playlist where I have simply said that it doesn't get much better than this. This is another one of those times.


Free Again - Alex Chilton
One of the rarest Teenage Fanclub records I own is a 7-inch import of rip roaring version of Free Again. It instantly became a favourite song of mine.

Stop And Smell The Roses - Television Personalities
One of the best names for a band ever, this song came on randomly when I had spotify on recently.


Anything Could Happen - The Clean
Another Spotify discovery at random. Love the raw vocals over acoustic and electric guitars and a simple beat. Rock n roll.


Streets Of Your Town - The Go Betweens
I caught The Go Betweens at the Renfrew Ferry a number of years ago. They were astonishingly good. I didn't know much of their music, my friend Ian bought me a ticket and I fell for their melodic guitar pop and charm instantly. This is a good example of why.


Black and White - The dB's
Another random Spotify discovery that I really enjoyed. There is such an urgency about this from the vocals all the way to the handclaps. I love the line we are finished, as of a lifetime ago


I Am The Cosmos - Chris Bell
Norman Blake, Bobby Gillespie and Tim Burgess have all highlighted this song in interviews over the years. Listen to find out why.


The Concept - Teenage Fanclub
Is this the first Fannies song on the playlist?! Well it is back to where it all started with the Fanclub for me, discovering them in 1991 through Bandwagonesque and this sublime chiming guitar pop and harmony driven beauty.


Echoes - Gene Clarke
Another guy that Norman, Bobby and co hold up in awe. I can never walk into Monorail Records in Glasgow and come away empty handed. One time i bought this after reading a review in Uncut or Mojo and i was not disappointed. How clever, amazing and wonderful this song is!


Clouds - The Jayhawks
Wichita - The Jayhawks
I caught a program on BBC Scotland from Cottiers Theatre in my mid-late teens and i was transfixed by The Jayhawks. What a band! Hollywood Town Hall is an incredible album. I fell for that perfect mix of acoustic rhythm and electric lead. Here are the 2-songs that were broadcast.

Wish You Were Here - Ryan Adams
I thought I was going to be listening to a Pink Floyd cover when I stumbled across this on YouTube. Listen for the superb use of swearing!