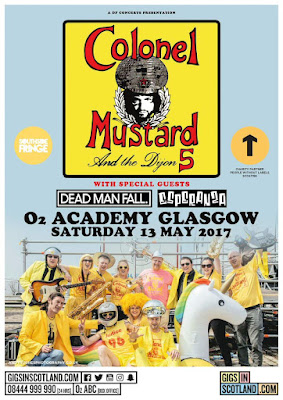 Earlier on this week I had the pleasure of spending some time in the company of the 2 front men from Colonel Mustard and the Dijon 5 - a band who have snowballed in the last few years, winning friends and fans wherever and whenever they play, selling out the Barrowland Ballroom and the ABC - unsigned and self managed.

John McMustard (McAlinden) and David Blair have had a ball and their good vibes and fun times have transferred to their audience. People dance, people smile, people have a great time and leave wanting to tell others to go and see them next time they play.

The band have just released the single Cross The Road b/w Freedom for the Children digitally (8th May) and on ltd yellow 7-inch vinyl via their website and Love Music in Glasgow.

They then play the Academy on Saturday 13th May with support from friends Dead Man Fall and Esperanza. It's been an amazing journey for them - get along to see them if you can, it will be amazing.

Check out this special podcast with tunes from Colonel Mustard themselves, 2 of their favourite bands from in and around Glasgow and an all-time fave in the shape of Primal Scream.

It's a fascinating discussion taking in all night acoustic jam sessions in disused mental hospitals, nursery rhymes, hymns, Screamadelica, Primal Scream's rider, festivals, South Korea, going from pubs to the Academy, running a 13 piece band, the yellow movement, Eddy Grant I Don't Wanna Dance and Adam Ant's Prince Charming, the 6th Dijon, writing with a 4-year old, the second album, dreams of playing the Hydro and much, much more....