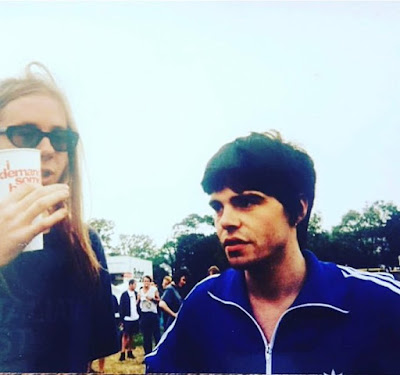 Tim Burgess from The Charlatans has long been a hero of mine. In my teens it was cause he looked super cool, fronting one of my favourite bands who consistently released brilliant albums and singles to soundtrack my life.

In my 40's it's because Tim is super cool in a new more mature way; still fronting one of my favourite bands who still release brilliant albums and singles ... but now he does so much more! Author of 3 books, solo artist and collaborator, record label co-owner, champion of music and an absolute legend on Twitter, even more so now.

Tim's energy and positivity inspire me. He is always up to something, and then looking for something else. His restless nature, friendly personality and fire in his belly mean that he is a guy who makes things happen.

In these worrying and testing times, positivity is required more than ever. Escapism helps as well.

So Tim has introduced #timstwitterlisteningparty In short this means everyone presses play, or puts the needle on a pre-chosen album at a specific time on a specific date. Tim, plus artists and associates related to the album tweet about the songs, stories about recording, memories of tours .... 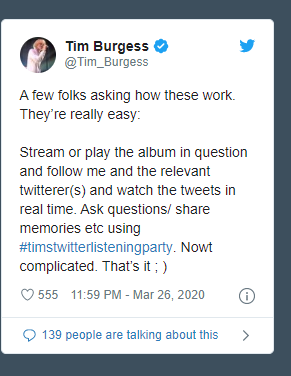 This is nothing new to Tim. He has been holding Twitter listening parties for The Charlatans for a number of years.

Norman Blake has been encouraged to come back on to Twitter for a Bandwagonesque listening party for Teenage Fanclub!

Since they started I've grooved about my kitchen with beers or lay in bed with my headphones on, enjoying listening to an album from start to finish and learning a little about it along the way. I've mainly been doing this live - when the party is happening - but I've also listened to others a day or two after.

You can find a full list of confirmed albums and participants at https://timstwitterlisteningparty.com/

Thanks to Tim for giving such a positive focus to music at a time when artists can't get out and play and fans are missing that interaction.

This week has all kinds of goodies, but I'll make sure I am listening live for The Flaming Lips Soft Bulletin, Orange Juice You Can't Hide Your Love Forever and then a glorious Saturday with The Beta Band Three EP's and  The Charlatans Between 10th and 11th and then Sunday with Pulp's Different Class and New Order Power, Corruption and Lies. 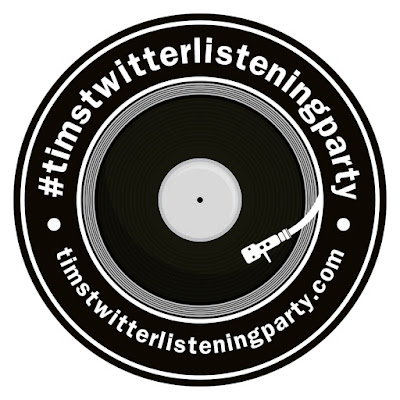