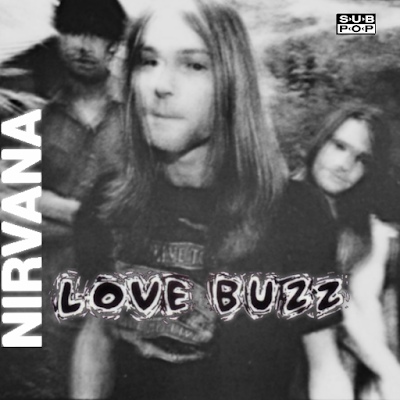 I recently watched the Nirvana documentary Montage of Heck accompanied by a few bottles of beer. I was transported back to my teenage years and the wonder of falling in love with the power, punk soul and melody of Nirvana and the charisma and attitude of Kurt Cobain.

The sheer energy that Nirvana generated live as they were breaking was incredible. One of the live performances shown in Montage of Heck was their cover version of Love Buzz by The Shocking Blue. I was captivated.

Krist Novoselic was seemingly lost and fixated on the bass groove, Dave Grohl looked young and ferocious on the drums, hair everywhere. And Kurt ... well Kurt is being Kurt; driving his band on by attacking his guitar, spinning around the stage and simultaneously inspiring and antagonising the crowd.

I have included 3 films of Nirvana playing Love Buzz in this blog to highlight the power and intensity of Nirvana's live performances around this time and the brilliant way they transform the original.

1. Live at the Paramount, Seattle, 31/10/91
Kurt is almost throwing his guitar around as he plays, looking to inject extra energy, urgency and sound. Meanwhile Novoselic and Grohl highlight how tight they were with Krist just grooving on the bass riff and Grohl matching both Kurt's energy and the groove of the bass.

Kurt looks and sounds like he is trying to dismantle his guitar at one point, scratching and pulling at the strings as the rhythm section groove on, they bring it all back together with his guitar miraculously still relatively in tune for one final blitz on the riff.

This is top class live footage with someone on stage really capturing the movement and ferocity of the performance. Breathtaking.


2. Dallas, Texas, 19/10/91
With the stage set dangerously close to the audience, with no real height to offer protection, Kurt plays with added intensity. A couple of bouncers try to deal with stage invaders and crowd surfers as Kurt rips into the riff and screams into the mic. At 2 minutes and 8 seconds something snaps and Kurt launches himself over the heads of the front row, he is hoisted aloft and somehow still generating sounds from his guitar as a bouncer tries to pull him back to the stage. For reasons we'll never know, Kurt strikes out at the bouncer with his guitar before being dragged back to the stage and receiving a hefty blow to the head by the bouncer.

Krist and Dave jump in and Kurt is back on his feet almost immediately as his mates try to defuse the situation.

The full show is available on the second video. Kurt has issues with the sound and after Polly he smashes the sound desk with his guitar at around 34 minutes 50 seconds in. By the time of Love Buzz Cobain's frustrations boil over and he launches himself into the crowd- as above.

Cobain pics his guitar up and plays what sounds like the riff of Something In The Way before tossing his guitar high and into the drums. There is a lot of noise and confusion before Nirvana play again with Kurt's guitar way out of tune for Penny Royal Tea.

Then in a remarkable show of resilience and character after the fight, Kurt and co tear in Negative Creep and On A Plain as bouncers/stewards gamefully try to keep people from invading the stage. The band end by ripping through Territorial Pissings. It is remarkable footage!

3. Live At Reading 1992
The above footage is incredible, both from October 1991, just a month after the release of Nevermind. Fast forward to the summer of 1992 and Kurt takes the stage at Reading in a wheelchair and hospital gown to take the piss out of rumours about his health.

The energy, passion and punk attitude from the above shows is still there as Kurt throws, smashes and detunes his guitar and then somehow manages to play it again. His unpredictability means that you just cannot take your eyes off him.


So Love Buzz is a favourite of mine, the energy leaps out of the song and the rhythm of Krist and Dave is sensational.

The original was released by Shocking Blue in 1969. The riff is there, but Nirvana electrify and magnify it, recognising its power and transforming it to their advantage. The original also has a bit of a crazy section before bringing the riff back in, but again, Nirvana take that to another level and Kurt's rasping vocal is just incredible.